He’s an ordinary guy blessed to receive extraordinary opportunities, like televising an event in 1989 that many thought would never happen. 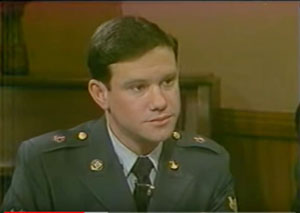 Charlie Gill was an Army broadcaster serving with the American Forces Network (AFN) during the Cold War with the Soviet Union. Then history happened. “Back then AFN had only one TV channel and I was the anchor for the AFN Europe Evening News,” remembered Gill. “I was walking out of the building in Frankfurt when someone came up to me and said East Germans were coming across the wall. The teletypes were going nuts.” People were chiseling and chipping the Berlin wall down chunk by chunk. Gill first reported on the momentous moment from Frankfurt before taking a duty train to Berlin to run the newsroom where history was happening.

In the years before live satellite delivered news and instant Internet access, Gill was the face of America. He delivered the news of the world to half-a-million Americans and millions of Europeans. It was Gill who first told them about tragedies such as the 1983 truck bombing of the Marine barracks in Lebanon that killed 241 and the 1988 Ramstein Air Show crash of three Italian jets that killed 70 and injured 500.

Gill’s other assignments as a feature reporter brought some comic relief. In one report he shed his Army specialist uniform for a safari hat and floral shirt to go “on vacation” to a nearby indoor German swimming pool.

There were other times when Gill’s team unintentionally created laughs. Once he was video-taping a reporter when the train she was standing next to started to leave the station. Problem was, the departing train was their transportation back to home station, about three hours away. Gill had some great footage of her running in high heels for the train they never caught. Another time Gill was in the balcony of an opera house recording a soft, intricate solo by an internally acclaimed violinist when Gill and his videographer stood up and their old wooden seat slammed up and down. “Everything got very quiet. Then every pair of eyes in the place turned and looked up at us as the violinist quipped, ‘Please, no encore,’ then resumed playing,” laughed Gill.

After that, Gill left the Army and went to Orlando, Florida, before getting a call from the United States Army Europe Public Affairs Office. “They said General Crosby Saint wanted me to come work for him in Germany. It was a wonderful compliment. We had established a special relationship when I interviewed him while I was a Soldier. He called me the Andy Griffith of AFN.”

Gill’s next jobs were in Korea and Germany. He joined the AFN Broadcast Center in Riverside in Nov. 2013, where he retired Dec. 31.

For Americans serving in Europe in the late 80’s, the humble, ordinary guy will be remembered most as the familiar face on TV that let them know the Cold War was over.