In the fall of 1950, as UN forces approached the Yalu river in North Korea, the discussion was how much longer the war would continue.  Many felt that the UN forces would easily be home for the holidays. As with so many predictions in times of war, this too fell flat. By Christmas Eve, UN forces and thousands of Korean refugees were evacuated from the port of Hungnam and sailed for ports further south to regroup. UN forces in the west retreated through Seoul and by January 1951, Chinese forces again overran the capital city. It was in this maelstrom of chaos, leadership changes, and bitter cold that the UN forces eventually went back on the offensive.

The leadership change had been an unexpected one. On December 23rd, Gen. Walton Walker, commander of the Eighth Army was killed in a jeep crash.  In his place, Gen. Matthew Ridgeway took command. This command change was at a critical time as the Chinese and North Korean troops pushed south again. As UN forces were assessing Chinese intents, the UN line became one that ran from just north of Pyeongtaek, to Samch’ok on the east coast of the country. At this point, UN forces launched a counter-offensive to push the CPV and the KPA  back north. 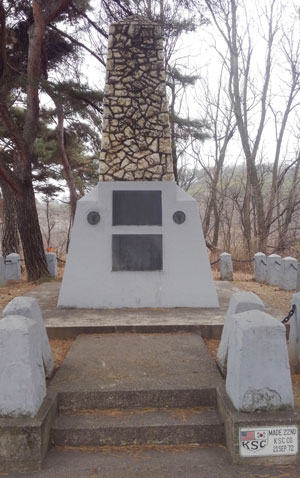 The offensive first began in the last week of January, as troops pushed north towards Osan, where UN forces first engaged the North Koreans the July before. It was during this time that the forces of the 27th Regiment “Wolfhounds” fought their way north. On the evening of February 8, 1951 on a hill near Anyang, Captain Lewis Millett led several assaults, the last being a bayonet charge, against Chinese forces. For this action, he was awarded the Congressional Medal of Honor. There is a dispute over the actual location of Bayonet Hill, and for that, one should read the article by David Murphy in HistoryNet. (https://www.historynet.com/hallowed-ground-bayonet-hill-south-korea.htm).

The actions of Millett, combined with the actions of the French at Chipyong-Ni, The Dutch at Wonju and several other valiant units all across the peninsula, drove the Chinese further back. By March 14, 1951, UN forces again liberated the capital of Seoul, and the tide of war shifted towards the 38th parallel once again. As with all the fighting in Korea, the fighting in the late winter of 1951 was much deadlier and more difficult than many were led to believe. However, the fighting did give the UN more breathing room.

By the next year (1952), the construction of K-55 (now Osan Air Base) began in earnest. One can still see the base of one of the buildings stamped with the year 1952 on it, across the street from the current movie theatre. The fighting, while still ongoing, had shifted away from this patch of farmland, and the aircraft flying from this base would contribute to the war in its final year.