Know what the color spots mean at parking lots

Driving around Korea you may notice the parking lots have many different colored spots with a variety of symbols. Is it okay for you to park in them? Here is a break down of who these spots are for and when it’s okay to use them:

Established to make women feel safer and reduce the risk of sexual assault, women’s parking spaces can be found nationwide. These spots are usually in an area under closed-circuit surveillance and are wider and longer allowing women with children and strollers to have enough space to get out of their vehicles.

You’ll recognize these as they tend to have hot pink outlines and are marked with the standard woman symbol. Critics say these spaces perpetuate  gender stereotypes, but since they’re not yet mandated by law, anyone can park in these spots. Shopping malls have embraced the “women only” parking space to promote their “women-friendly” image.

These spaces marked in yellow are for elderly drivers, especially those who have mobility difficulties. Like the women’s first parking spots, these are close to entrances, making it easier for an elderly person to walk to their destination. These spots, while necessary, are not easy to distinguish from other parking spaces, as they are marked with ‘어르신 우선 주차구역’ meaning “elderly parking space.” Recently, signs with an elderly person logo have gradually started to appear, but they vary by region.

Expectant mother parking space
This type of space is increasing in many government office parking lots around South Korea. In the case of Gyeonggi Province, space is limited to women who are pregnant and within 6 months of giving birth.

Criteria differs from district to district. Like a women’s priority parking lot, these parking spaces are wider than regular parking lots and are bordered with hot pink outlines and marked the pregnant woman logo. Technically, anyone can park in these spots.

At present, there is only  the establishment of an Expectant Mother Parking Space Act, and there is no punishment for who park in the place. Beware, just because anyone can park there now doesn’t mean you will be able to in the future. Many local governments and the national assembly are working to create legislation for these spots.

In some areas, only people who have a pregnant women parking permit issued by a local government are allowed to park in these spaces. 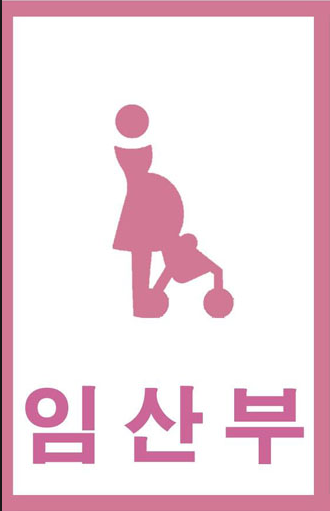 Parking space for military veterans, police or firefighters These spaces have only been in existence for a year, starting with the Yongsan-Gu office in Seoul, and are meant for those who served the country.

Military veterans and police officers can park in these blue spots marked with a ying-yang symbol and dove logo. While these parking spaces are mandated by city ordinance, there is no fine associated with them; violators will be instructed to move their cars. (Note: These spaces are for those who participated in the war or pro-democracy movement in South Korea, and public servants who suffered severe physical injury and mental problems in the line of duty. Not all military veterans, police officers and firefighters can use this space.)

Where and how to park when in Korea