Being far away from family and friends during the holidays can be a very trying and emotional time for most people. This is especially true for American service men and women serving overseas, particularly those who are single or who are serving unescorted tours. The USO exists to “strengthen America’s military service members by keeping them connected to family, home and country.” At this time of year, carrying out our mission is more important than ever. 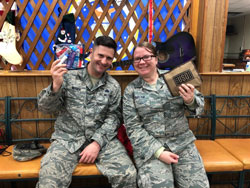 During this holiday season, staff and volunteers from USO Osan Air Base (Korea) tried hard to bring a little bit of home to those who could not be there. They traveled far from their normal base at Osan to smaller, less well-known bases at Gwangju and Kunsan, to show their support for the smaller number of U.S. service members serving at the remote locations.

Gwangju AB is a Korean Air Force installation more than three hours away from Osan AB. There are only about 35 U.S. Air Force service members stationed there. On December 13, the USO delivered them Holiday Care Packages; gave out hats; and served a holiday meal which consisted of roasted turkey, ham, stuffing, baked yams, mashed potatoes, green beans, buttered corn, rolls, cranberry sauce, and pumpkin pie. These traditional holiday foods provided a sense of home, comfort, and cheer to the service members there who are away from home for the holidays. 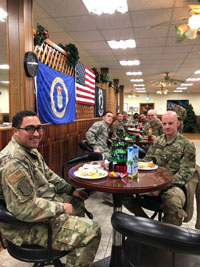 Four days later, Team USO Osan hit the road once again. This time, they traveled two and half hours each way to Kunsan Air Base to host a Christmas luncheon for American  service members serving at that location. At this base, 247 service members enjoyed the tasty feast. After the luncheon, the USO visited various units to deliver holiday care packages that consisted of an assortment of toiletries, snacks, candy, cocoa, and a USO portable cell phone charger to lift holiday spirits for those who could not make the luncheon. An airmen who wanted to remain anonymous said, “This was the first time I have received a gift for Christmas since I was twelve.”

Volunteers Staff Sergeant Christopher Lansville and Mr. Ralph Nelsen travelled with the USO staff to Gwangju Air Base to help out with the festivities. Lansville, himself an active duty airman, noted that the Gwangju Airmen were very appreciative of the USO travelling the three hours to serve their remote community. He commented “I was very proud to be a part of this outreach program and to support other military members that are also deployed during the holidays.” As for Mr. Nelson, a retired service man himself, he has been supporting service members away from home during the holidays as a valued USO volunteer for more than ten years.