Air Force Chaplain (Captain) Jason Gunnels is a lot like a magician’s hat with a whole lot more in it than you’d expect---like owning one of those hats because he’s a professional magician working weekend gigs in Southern California. 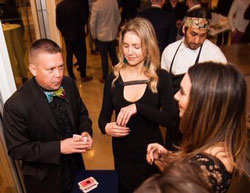 “I started performing magic in 2000 while working as a youth pastor at a church in Texas,” Gunnels explained.

His performances have sometimes been unintentionally entertaining for the wrong reasons. “Once I was escaping from a strait jacket and accidently slammed my nose on a table. It started bleeding profusely, but I kept going and finished the act. Most people thought it was part of the show,” he laughed. “Another moment involved me doing a kids show and magically “producing” the family guinea pig, Fonzie. Everything went great,” said Gunnels, “until I held him up for applause and the little fur ball launched a watery stream toward the kids. That was his last performance.” 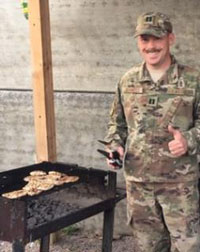 You’ll never hear the 44-year-old father of three say he likes to sit around and do nothing. From 2014-2018 he learned how to a DJ radio show at the U.S. Air Force Academy. Since he joined DMA Riverside in 2019, he learned to make homemade sausage. He already knew how to smoke and grill, as well as create his own corned beef, and serve it up in a Gunnels’ original Reuben Sandwich from a portable grill in the parking lot.

Despite all that work, Gunnels finds time to minister to others.

He recently joined the Riverside, California, Sheriff Department as a volunteer Chaplain.

“I ride along with them, establish a connection and help them when they need grief counseling or just someone to talk to,” shared Gunnels. “It’s a life-and-death stressful job.” 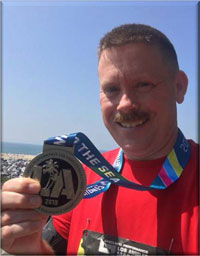 “I’m grateful to have a boss who allows me to help out the chapel team at March Air Reserve Base,” he said. “For the most part I have helped out with memorial services at Riverside National Cemetery when the chapel team at March cannot support. I’ve also been asked to provide counseling for Airmen.” Gunnels goes to a nearby cemetery to help preside over memorial ceremonies for homeless veterans. In about a year he’s led funerals for 84 different homeless vets.

Once a month Gunnels goes to a senior’s facility for people suffering from Alzheimer’s and entertains them by strumming a Ukulele, telling jokes and performing magic.

The man with the short-cropped haircut always seems to search for a new challenge, like occasionally rocking a mustache.

“Most of the time I grow it for specific reasons,” said Gunnels. The obvious one is Mustache March. Other reasons were my niece’s wedding, mustache competitions and official military photo.” His mustache is famous. “I won the 2012 Mustache competition at Patrick Air Force Base,” Gunnels said. He was one of about 50 competitors on the Florida base.

That’s not the only competition Gunnels participates in. He ran the L.A. Marathon last year and is training now for an Ultra Marathon 50-Kilometer run in Southern California. What’s certain is his “extra hairy lip weight” won’t slow down the guy who is far more than meets the eye, Jason Gunnels!