Staff Sgt. Jesse Chavez, joint terminal attack controller assigned to the Regionally Aligned Brigade (RAB) receives instruction from the simulator operators as he goes through a scenario at Osan Air Base, Republic of Korea, Nov. 1, 2019. While inside the simulator, instructors may give critiques to the controllers to provide pointers on how to better navigate certain scenarios. (U.S. Air Force photo by Senior Airman Darien Perez)

Adrenaline rushes as gun fire bursts all around.  Fighting for what seems like an eternity, the operator calls for a helping hand as the grueling battle comes to a stalemate.

Calling for backup, a thunderous roar soon approaches in the distance as an A-10C Thunderbolt II emerges. As the A-10 pilot responds to the call, the Tactical Air Control Party’s long battle and mission is complete -- the simulated enemy is defeated.

The dark night suddenly becomes bright as the lights flicker on. The instructors give a job well done and critiques inside the flight simulator where the TACPs train inside the pitch black dome where they can replicate any air field in he world or any scenario imaginable plastered on a panoramic screen.

The 607th Air Support Operations Group is home to one of the most immersive training simulators in the Air Force. The simulator helps TACP Airmen hone their skills while getting instant feedback by instructors in their career field.

“When you step into the sim, you have to come in with the same mentality that you’re doing this with live aircraft,” said Tech Sgt. Scott Snider, 607th ASOG weapons and tactics NCO in-charge. “The simulator allows us to train to a real-time environment for downrange operations. It allows us to conduct moving target missions, to spot aircraft and helps us simulate exactly what we are doing downrange in a controlled environment, which is very difficult to do when you’re not actually there.”

Some training sessions can last from 4 hours to one or two days depending on the operator;s skill level and the complexity of the scenario that has been given to them.

Along with being in front of a screen, the training allows for users to use real operational equipment they would need to conduct a successful mission and also allows for the user to get hit by enemy fire.

Although the training is done in a virtual environment, the virtual aspect is continuing to change and evolve as time progresses.

“The current simulator we have has made leaps and bounds from what we used to have,” said Master Sgt. Cole Waterbury, 607th ASOG operations superintendent. “To say the original Nintendo is what the original simulators looked like is pretty close. It was a flat screen projected on the wall and it didn’t really have a lot of options. With this new one we are capable of doing a lot more things with it, and provide a lot more realistic training.”

No matter what the training, these Airmen are always ready to adapt to the situation and what obstacles stand in their way, and it is no small part due to the state-of-the-art training they receive. 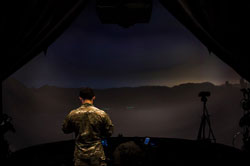