Taekwondo: Korean kids get a kick out of the martial arts

Taekwondo: Korean kids get a kick out of the martial arts

Probably the most easily accessible sport for Korean children is taekwondo. Classes specializing in the martial art can easily be found anywhere in Korea. If there isn’t a taekwondo studio around an elementary school, it feels like something is missing. It is also no surprise that Korea wins a lot of gold medals at the Olympics for the sport.

In an effort to curb bullying, many parents will enroll their children in the local taekwondo dojang. This is especially true if both parents work outside the home, so taekwondo is a good afterschool activity. Let’s face it, a taekwondo studio is a cheaper alternative to other after-school facilities. 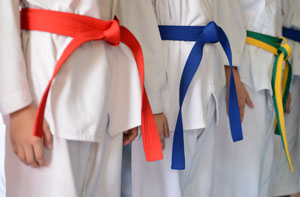 I started learning taekwondo when I was a 3rd-grader, not to survive in a classroom full of immature and violent children, but for one very important reason: It looked so cool!

I quickly learned that although the martial art looked cool, it really wasn’t the easiest to practice. It’s a lot of work. I went to the studio every day after school, ran laps and practiced poomsae, a pattern of movements you must perform based off your level. Sometimes it felt like torture, especially when I had to do the splits. I really tried to avoid doing those.

As your skills advance, you can take a test to be promoted to the next belt with the ultimate goal achieving the coveted black belt. My friends and I were motivated to be promoted.

Every time I was awarded a new belt, I felt a big sense of accomplishment. Unfortunately, the last belt I earned was the red belt, the last one before becoming a black belt. Why did I stop? Because I had to go to a math institute. This is common in Korea, where there is a lot of competition to get into college. 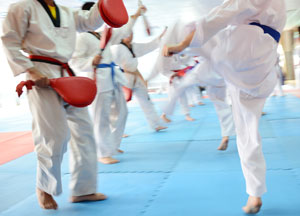 I got back into taekwondo in 2003 when I started serving my 2-year term in the Korean navy. It was part of our military drills at the navy training camp in Jinhae. Surprisingly, my body remembered all the taekwondo Poomsae. That portion of the training was very easy for me.

I admit that traditional martial arts are taking a backseat to the brutal and bloody world of UFC in terms of popularity. However, taekwondo is not just a sport that makes people bleed or knock out somebody. This sport can teach you discipline and respect, make you stronger and more flexible. If you haven’t already signed up on your base or at an off-base gym, give it a try to get all the benefits taekwondo can offer. Plus, it’s cool!

Is this a video fighting game, or Taekwondo?

Is this a video fighting game, or Taekwondo?