Bunsik, literally meaning "food made from flour," is a term used to refer to reasonably priced Korean dishes. The most adored bunsik includes Gimbap, tteokbokki and eomuk.

Many street vendors can be found near Sinchon, Edae, Hongdae, and many other university areas, as well as in the popular shopping districts of Myeong-dong and Gangnam. 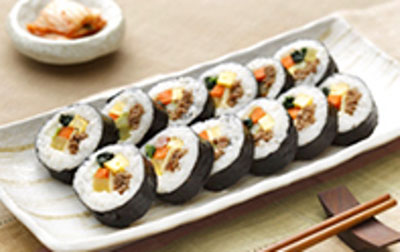 Steamed rice is either simply seasoned with salt or with baehapcho, a mixed seasoning of vinegar, sugar and salt. The rice is then placed on a sheet of dried laver. Strips of eggs, eomuk (fish cake), carrot, seasoned spinach and pickled radish are then placed in the middle to be rolled together into a cylinder shape. The roll is then cut into bite-sized pieces. The taste can be quite versatile, depending on the ingredients. Gimbap is a perfect meal option for when you’re on the go! 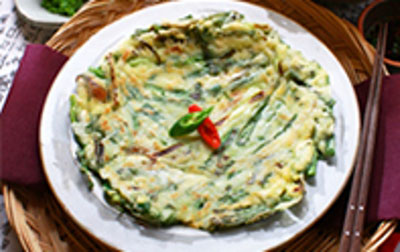 Buchimgae and Jeon refer to many pancake-like dishes in Korean cuisine. Meats, seafoods, vegetables and eggs are mixed with flour batter and then pan-fried with oil. Depending on the ingredients of choice, the pancakes are called differently. Examples include pajeon made of spring onion, kimchi jeon made of kimchi and bindaetteok made of ground beans. All go well with makgeolli (Korean rice wine). 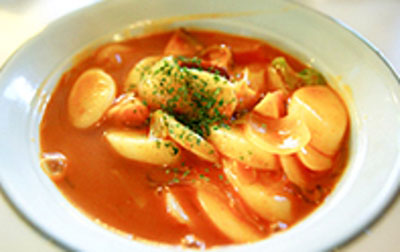 Tteokbokki, along with gimbap and odaeng (skewered fish cake), is one of the most common foods sold by street vendors. Rice powder is steamed and made into a long cylinder-shaped rice cake called garae-tteok. This rice cake is cut into finger size pieces and cooked in a spicy yet sweet red pepper sauce called gochujang. Fish cakes and vegetables can be added depending on personal tastes. 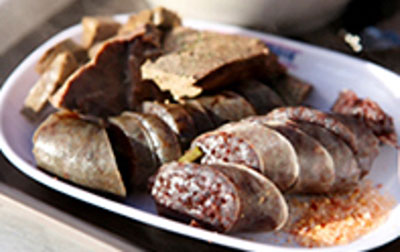 Sundae is a traditional sausage made of the lining of pig intestines stuffed with a mixture of bean curd, vegetables and potato noodles. It is usually dipped in seasoned salts and in some regions, it is served with ssamjang, a mixed paste of gochujang and doenjang (fermented soybean paste). Sundae can also be made with squid or mixed with glutinous rice. 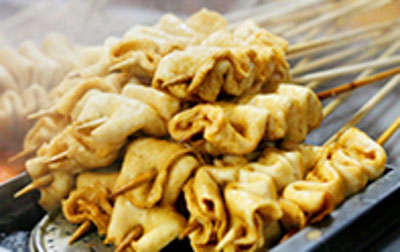 Eomuk is usually referred to as odaeng. Odaeng is a kind of fish cake, made of ground fish. This fish cake is skewered and boiled in water along with radish and green onions. This popular snack is especially loved during the cold winter months. Some variants also contain sausage, cheese or rice cakes. 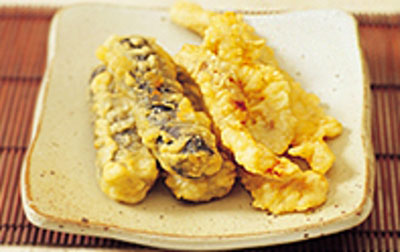 Twigim is the general term for deep fried food covered with a flour batter. Squid, dumplings, potatoes, shrimp and assorted vegetables are the usual main ingredients. They taste even better dipped in soy sauce or tteok-bokki sauce. 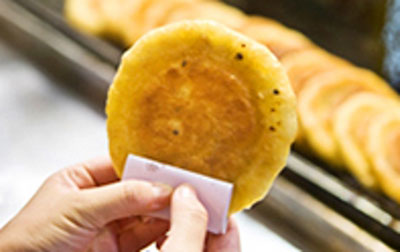 Hotteok are chewy pancakes, usually stuffed with various combinations of sugar and walnuts or pine nuts. The recipe can be made adventurous by adding vegetables or cheese to the batter. The dough can come in a unique green color by adding green tea powder. 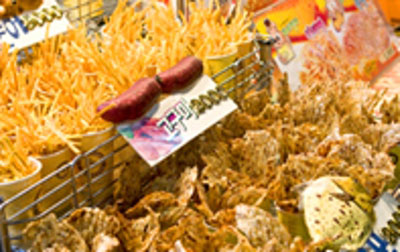 Jwipo is a type of dried fish dipped in a sauce. At street carts, jwipo and dried squid are usually roasted over a bed of pebbles. When grilled, jwipo’s sweet and savory tastes become even more flavorful. 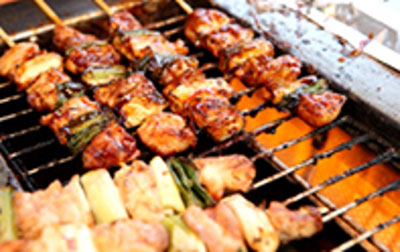 Kkochi refers to cooking skewers of meat. The most common kkochi is dak kkochi, meaning chicken skewers. Small pieces of chicken and vegetables are skewered, coated in sauce, and then grilled. Sausages, fish cakes and tteokgalbi (grilled short rib patties) are also often skewered, adding fun to choosing your own favorite kkochi. 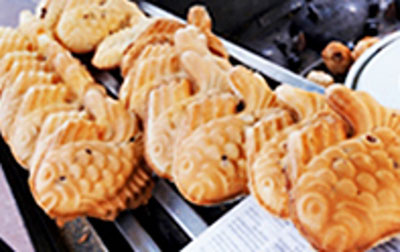 Bungeo ppang gets its name from its fish-like shape, which is especially popular in winter. This sweet snack is molded in the shape of a carp, which is called bungeo in Korean. The pancake batter-like shell is filled with red-bean paste, cream, cheese or sweetened beans and then baked. Gukhwa ppang is shaped like a flower and is slightly smaller than that of the similar tasting bungeo ppang. Gyeran ppang is also made of a pancake batter-like shell, but is filled with an egg during the cooking process instead of a red bean filling. 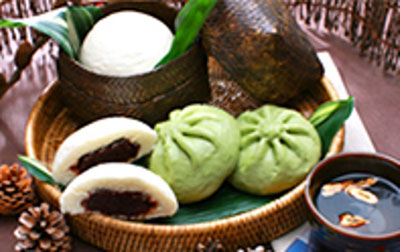 Hoppang is one of the most popular warm snacks in winter. It is a pre-cooked ball of rice flour with various fillings, such as red bean paste, vegetables or pizza ingredients. Hoppang is usually steamed to keep it warm and is sold on the streets and at convenient stores.