When thinking of beers and breweries, South Korea may not be high, or even present, on a brew connoisseur’s list. Many dismiss Korean beer as too weak or too watery, but there are breweries and microbreweries popping up all over the peninsula aiming to change these misconceptions.

Starting with a change to the Liquor Tax Act in 2014, small breweries were then able to start distributing their brews. From there, a tidal wave of different craft beers such as lagers, porters and IPAs began to sweep the country.

Below, we’ve tried five spots to grab some fresh brews within driving distance of Camp Humphreys. Though far in distance from each other, these would be great weekend destinations, and most are easily accessible via public transportation. So, get your rail pass, cab fare, or designated driver ready as we head to some of the places turning out some of the best brews you can bring to your lips. 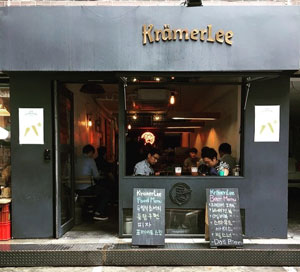 A newcomer onto the craft brewery scene, microbrewer Kraemerlee Brewery opened in Ansan in 2015 under the name which is a combination of the co-founders’ names Kraemer, a German brewer and two Lees from Korea. In 2010, Lee Ji Kong, who majored in finance, and Lee Won Ki, who majored in chemical engineering, met at a language school in Germany and from there, their idea for a beer business in their native Korea was conceived.

At Kraemerlee, you’ll find many German beers crafted on site including pilsner, weissbier and single hop IPAs (6,000-8,000 KRW or about $5-7). The brewery also hasn’t shied away from tackling the more difficult weizenbock, a type of winter wheat pilsner beer.

This summer, Kraemerlee will be moving into a bigger space in Gapyeong in northern Gyeonggi. “The current brewery here haven’t enough space to entertain our visitors who want to enjoy our beers, so we’re preparing a cozy place for beer nerds who want to enjoy not just the beer but the nature of Gapyeong,” Lee Ji Kong said. If you’re searching for an authentic German beer taste, a trip out to Gyeonggi will be worth your time. But, if you want to sample their beer without traveling to Gyeonggi, their Seoul taproom is sure to satiate your beer needs. Or, be on the lookout for bars and restaurants around the area stocking Kraemerlee brews.

We sampled the Pilsner, which has more hops than a lager, but lighter than a pale ale. The flavor was a departure from the ordinary and heavy beer taste I would’ve expected. Light and slightly bitter, this pilsner would be great on a hot summer’s day.

Kraemerlee doesn’t offer tours of the brewery but you can get a breakdown of their brews and even sample the different ones they make on-premise.

No food. They sell a limited number of bottled beers to take home after your visit. 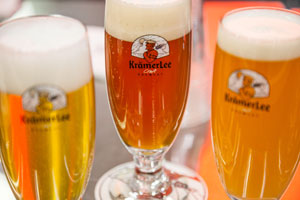 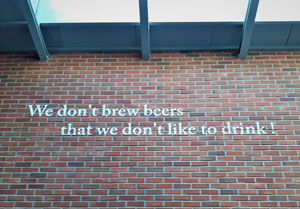 Korea Craft Brewery opened its doors five years ago in Eumseong, Chungcheongbuk-do Province. It’s known for its delicate brews and cold zone tank area which has generous lighting making it Instagrammable enough to be the social media symbol of the brewery. What sets this brewery apart, however, is its use of Japanese technology in a German beer brewing environment. At this brewery you’ll find just about any type of beer you’re looking for: Irish stout, IPA, weizen, pale ale and more. Keep an eye on Korea Craft Brewery as it’s expanding with no signs of stopping.

The brewery offers tours which include tastings ($18-26) and don’t forget to stop at the taproom on-site for a cold one paired with some nice snacks and live on-stage music. The brewery and tasting tours are only open on Saturdays, so check in advance.

We sampled the Hug me, a Belgian Wit. This one tickled our taste buds with a light tartness, lemony finish and its layered aroma featuring local Eumseong ginger.

Plenty of options in Korea Craft Brewery’s taproom including pizza, and German fares like sausages and fried potatoes. 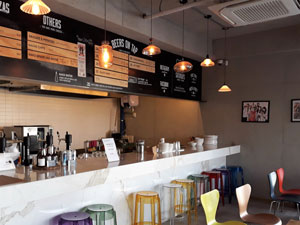 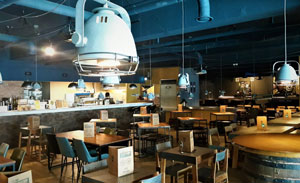 Near Busan, Levee Brewery has been putting an industrial spin on its craft beer since 2002, while at the same time producing beer in Suwon with local ingredients starting in 2004. The Suwon beers are insanely popular and there is a high demand in Seoul and Gyeonggi area for the beer they’re putting out.

Built on a historic levee dating back to the Joseon Era (1392-1897), the brewery gets its name from there as well as the names of some of their flagship beers. Night hunting for their stout, Red Ghost for the IPA, and Grey Wind is what they named their wheat. These flagship beers are the result of the years Levee Brewery has spent developing their signature beer taste.

Being one of the more accessible breweries on this list, stop by to sample these concoctions or the brewery’s impressive seasonal malt beer ($6-7) with trusted favorites and yummy food. On my next visit, I’m definitely going to take advantage of the unlimited beer tasting service which is a steal at about $23 for a 3-hour session.

We sampled Levee Brewing’s specialty beer, a German-style Kolsch. It was crisp, delicate and surprisingly drinkable. The light and refreshing ale-lager hybrid was perfect! If you can’t choose between an ale and a lager, grab the Kolsch, it might just be your beer of choice.

Check out their vast menu with good eats perfect for pairing. Some of these plates include seasoned spicy chicken, honey garlic chicken, meatballs with mashed potato and cranberry sauce, fruit and cheese platter, gorgonzola pizza and more.  ($7-12) 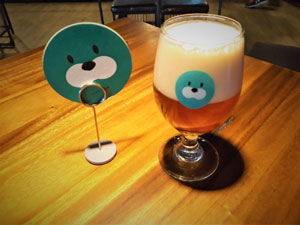 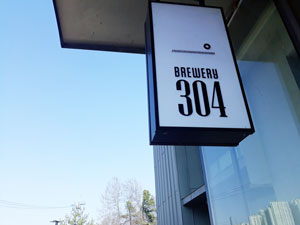 Launched in 2016, Brewery 304 has quickly risen to the top of Asan’s craft beer scene. Visit the brewery on Asan’s east side where Jaesung Lee, a former seminary student, is bringing experimental craft ale beer. The small space looks like a laboratory and uses advanced water treatment facilities to purify the underground water creating the perfect condition for brewing. The name Brewery 304 came from its lot number in Asan district.

Reach for PLUTO their specialty blonde ale with great fruity flavors. Lee is a big fan of experimentation and releasing ‘limited seasonal’ editions of his brews. On Saturdays, Brewery 304 is open to the public for beer-tasting and the occasional brewing class. Their beers are meant to connect locals, so go on and find another beer enthusiast at their free brewery tours and tastings.

We sampled the PANGPANG IPA, an ale beer, which will soon be available for purchase at taprooms in Seoul, Gyeonggi-do-area and on-premise. The beer delivered an exquisite taste with every sip and had a slightly hoppy profile with bright, citrusy notes. We also sampled the mildly thick, dark stout which is still under development. Its smooth texture, with light hints of raspberry had me wondering when I could get my hands on this again, but Lee said it might not be released until sometime this winter.

Brewery 304 doesn’t offer tours of the brewery, but you can get a breakdown of their brews and even sample the different ones they make on-premise.

No food. They sell a limited number of bottled beers to take home after your visit. They plan to open a direct management taproom in Seoul in June. 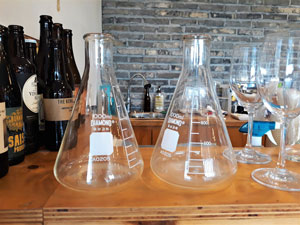 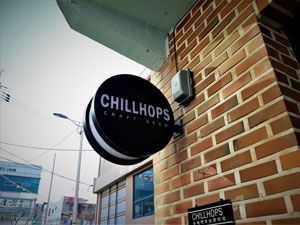 In the mood for an authentic Aussie-inspired ale using a variety of local ingredients? Head over to Chungcheongnam-do and pop into Chillhops Brewing Co. How about a New Zealand-inspired brew? Chillhops has that, too. The Seosan brewery, which opened in 2017, prides itself on crafting Australian ale in South Korea. The owner focuses a bit more on hop flavor and aroma to demonstrate the strengths of his native Australia while using local ingredients like ginger and Seosan-bay salt.

Unlike other brewers who import hops and malt from Europe or the U.S., Chillhops imports ingredients from New Zealand to offer a unique style and taste. In the taproom, grab the Down Under, a golden ale, which is the perfect choice for a beer novice as it offers a lovely golden color and clean bitter finish. Chillhops has a well-rounded beer menu ranging from easy-to-drink ale beers (5% ABV) to a strong porter with a high alcohol content (10.8% ABV). The rotating tap selection and warm and friendly service will keep you coming back to the Chillhops taproom.

We sampled SWEET AS GOSE. The initial taste is sharp and slightly sour, but this fascinating red-tinted beer has a triple berry finish to balance it out. It was the most unique and interesting beer that I’ve ever tried! The other beer we sampled was Chur Bro (IIPA, ABV 8.3%), with a strong malty ale base and ripe sweet peach and apricot layers. The well-roasted malt in this one gave it a caramel body and overall made it a surprisingly pleasant brew.

Chillhops brewery doesn’t offer tours of the brewery but you can get a breakdown of their brews and even sample the different ones they make on-premise.

In the taproom, they offer some of the old standbys Americans love to have when they’re drinking: nachos, cheese sticks, chicken quesadillas, beef jerky, sausages and salami. 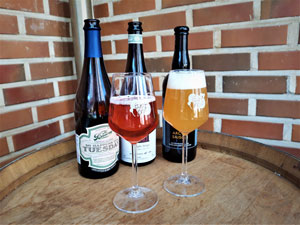 The Journey of Your Beer

The brewing process is made up of about eight to ten production steps from the fresh barley to the finished beer. Although depending on who makes the beer it will be made differently, the basic brewing process is not that complicated like the type of the beer. Let’s look at the process to make the freshest beer. 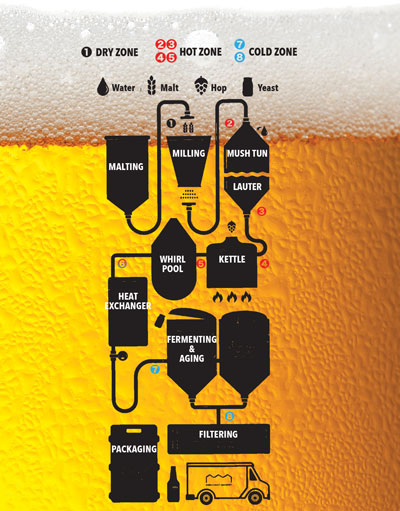 According to the US Brewers Association, microbreweries produce less than 15,000 barrels of beer per year with 75 percent or more of its beer sold off-site. Most of the breweries in Korea fall under this category. 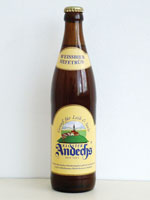 Weissbier is a wheat beer, which is brewed with a special strain of yeast that lends some pretty unique flavors to the finished beer. These vary depending on the style. Flavors will range from malty and bready to fruity, with few noticeable hop characteristics (especially bitterness). 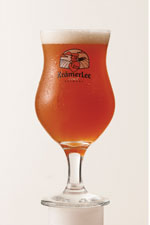 Weizenbocks are winter wheat beers. The color can be pale gold to brown. They are of higher alcohol content with flavors of bready malt and dark fruits like plum, raisin, and grape. This style is low on bitterness and high on carbonation. 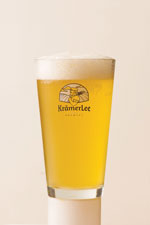 Lager is a type of beer conditioned at low temperatures. It can be pale, amber, or dark. Crisp and refreshing with a smooth finish from longer aging. Pale lagers are the world’s most widely-consumed and commercially-available style of beer. 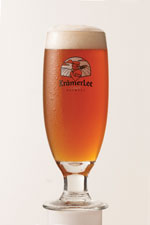 IPA stands for India Pale Ale. It was allegedly invented by the British during their efforts to colonize India as the name hints. But the beer British sent failed to endure the sea voyage all the way to India. Extreme temperatures and prolonged storage spoiled the beers. So, to prevent it from happening, more alcohol and hops which work as preservatives were added, consequently, making it a highly bitter and alcoholic brew hearty enough to make the long ocean trip. 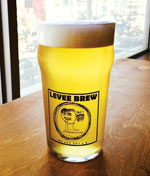 Kolsch is a unique style beer in that it is fermented with ale yeast but then finished with lagering. 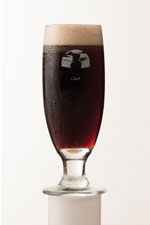 Modern English porters come in two styles: Brown and Robust. Brown Porter is more malty than hoppy, with flavors like bittersweet chocolate, caramel, or toffee, without any significant quantity of roasted barley (the stuff that gives stout its coffee depth).

AVB:The number of milliliters of ethyl alcohol present in every 100 ml of an alcoholic beverage.
(Info from vinepair.com, allaboutbeer.com, foodandwine.com)

Gorilla Brewing to open a new location this Saturday night