Located near the entrance to the Namgu Sports Center after the roundabout, Oryukdo Gawon features a great view and atmosphere. On entering, you would be amazed by the breathtaking scenery, modern-artistic construction and the surrounding beautiful countryside. 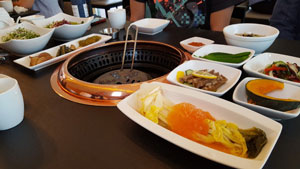 The fresh and homemade-style side dishes will stimulate your eyes and taste, and of course, the hanu is fresh, which you cook on a charcoal grill yourself.

There is also a café attached to the restaurant, so if you do not want a big meal but just want some coffee, beer or ice cream, you can just go to the Café Gawon. They have draft (Arcobrau Weissbier Hell or Guinness) and bottled (Asahi, Heineken Lanche De Bruxelles) beer from 7,000 won.

Both the restaurant and café have outdoor tables where you can enjoy the surrounding nature during a meal or over a cup of coffee. 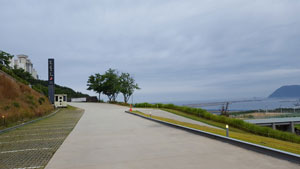 Parking is available. Reservations are recommended.

Match made in heaven: Pairing Korean food with tasty wine

VIDEO| Turn up the heat with some kimchi pancakes