Bon Juk serves Korean 'porridge', and you can find numerous locations of this chain all over the city. One of the Seomyeon locations is reviewed below.

I’d never tried this dish before coming to Korea, but now I love it. It’s so warm and filling, sweet or savory depending on your taste and can also be a respite from the constant bombardment of five-alarm chili meals. 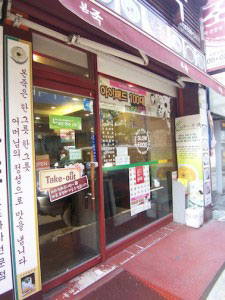 Bon Juk in Seomyeon is dedicated to the tasty, lumpy stuff. The English sign, which is on the front window just next to the Take Out sign on the door, professes that they’re followers of the slow food movement. I slid into a booth and decided to take some time out to really savor my meal, a la slow food movement. The well padded seats and generous table size really make you feel like you’re a world away from the normal hustle and bustle of Seomyeon.

Flipping through the menu you’re given a plethora of juk options. The more exotic choices include: abalone juk, small freshwater snail juk, octopus kimchi juk, black sesame juk and  mushroom oyster juk. The classics include vegetable juk, sweet potato juk, shrimp juk and crab meat juk. The menu  is in both English and Korean. I was after something spicy, so I went for the spicy beef and lentil juk for 9,000 won. The dishes are on average 8,000 won. The cheapest on the menu, vegetable juk, is 6 500 won and the abalone is the top end, with a large serving breaking the bank for 20,000 won.

It arrives at the table with the usual assortment of sides, I had kimchi, shredded beef and chili sesame paste along with a refreshing, cool radish soup. The juk comes in a large bowl that you ladle into a smaller one. Sharing a big bowl between two is frowned upon, but you can probably have a taste of your friend’s dish. At first glance I didn’t think I could empty the entire serving but ladle after ladle of the savory, spicy health food, interspersed with the radish soup and sides was heavenly. I found myself scraping the bottom of the bowl all too soon. They will let you take home a doggy bag, if you are able to leave any on your plate!

The staff were polite and actually quite speedy for a slow food place. With more seating downstairs, Bon Juk is a great retreat for a quiet meal. It can be especially handy if you have a friend who doesn’t want anything spicy, a challenge at times.

Directions to the Seomyeon location that was reviewed: in Seomyeon station, head to exit 1, but continue through the underground mall until you find gate 4 (it should be the second set of exits that you come to on your right).  This brings you aboveground outside a Woori Bank. Turn left and Bon Juk is the second shop on your right hand side.

Reviewed by Melissa Tait by way of Busan Awesome.

A good reason to go to Songdo, Korea: Beer, pizza at the CAVE