Hidden on a nondescript side street just minutes from Hongdae’s bustling shopping district is Gusto Taco, the neighborhood’s top spot for Mexican food. 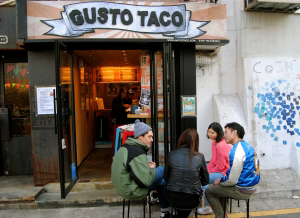 Décor is minimal; six mismatched stools tucked under a counter, wood paneling and some framed magazine articles make up the entirety of the interior. Food is cheap and filling (at 3,500 won for an order, their tacos might be the cheapest in the city), while staff are relaxed.

Like your favorite childhood pizza joint, Gusto Taco is a place that feels instantly familiar — a Hongdae “Cheers,” complete with its very own hipster Ted Danson, Gusto’s owner and head chef Aaron Allen.

The restaurant’s homespun simplicity belies a depth of flavor and dedication to craft. In fact, after two years of searching for good Mexican food, I can say Gusto just may have the finest tacos in the country.

For Allen, who co-owns the eatery with his wife Hye-jin, less is more. “A great taco is simplicity and time,” he said. “It means not putting in anything that doesn’t belong there.” 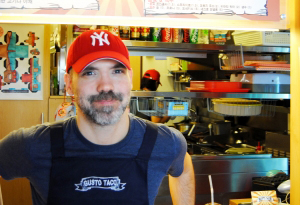 Tall and sinewy with short, cropped hair and a salt-and-pepper beard, he’s the kind of guy you can’t help but get comfortable with right away. The type you end up talking to about new music, string theory or relationship problems without ever realizing you’ve entered into conversation. He is the restaurant’s gracious, intelligent and empathetic core.

Since leaving his job as chief technology officer for a hedge fund on Wall Street (he previously lived in the U.S. taco capitals of Austin and San Francisco as well) and moving to Seoul to have a child in 2010, Allen has quietly built up a legion of devoted followers with his quality-first approach.

For eight hours each day he slow-cooks whole slabs of chicken, pork and beef from a local butcher. Tortilla dough is ground from whole corn and also slow-cooked on the premises. Essential items that cannot be found in Korea (peppers and hot sauces from the States, cheeses from Italy) are imported. The result: high-quality, consistent food.

Throughout the five-item menu, meats are tender and flavorful (stew-like in the case of the pork and beef, yet slightly crispy). The tortillas are cornier than average.

Gusto has a wide selection of reasonably-priced Mexican beer, and vegetarian options are available. While the burrito and quesadilla are both worth a try, the restaurant’s signature item is pork tacos. Each order is served on two soft, lightly fried corn tortillas with bare bones pico de gallo (tomatoes, onions, lime and fresh cilantro), full-fat sour cream, smooth avocado crema, a sprinkling of cheddar and hot sauce.

“They’re spicy and they’re greasy, but the right kind of greasy … like a little bit of heaven on crack,” Allen said of his prized creation.

I call it Mexican traditionalism done right: an efficient balance of flavor and texture.

Whatever the description, everything at Gusto feels expertly constructed. The right amount of saltiness, the right amount of greasiness, acidity and spice; when Allen or his wife make the food (and they always do), there is no need to add anything else. Extra sauces are conspicuously absent from the dining area (too many extra sauces lying around is a telltale sign of low flavor confidence).

For Aaron Choe, a Hongdae-based DJ, foodie and Gusto fanatic, nowhere else compares. “I purposely get hung over, just to eat there,” he told Groove Korea. “But seriously, the tacos are transcendent.”

As Allen said, “These tacos are some of the best that I’ve ever tasted. I’m pretty proud of them in that sense. Once you have the best of something in a category, you can go anywhere with that. But you’ve got to get to that point and it takes a couple years.”

For every Allen there are plenty of confused restaurateurs out there — men and women who lack clarity of purpose. They have huge menus and try to turn fast food into upscale sit-down dining. The reality is that a taco is one of the simplest foods in the world (the word taco originally comes from “wad” in Spanish). Mess with it too much, and it becomes convoluted.

At a time when new Korean-Mexican fusion eateries are proliferating in Seoul, each one trying to follow the same, tired blueprint, Gusto is a refreshingly unpretentious alternative.

Sure, it may not be much to look at, but they make one hell of a taco.

Directions: Gusto Taco is open from 12 p.m. to 9 p.m., or until they sell out, and closed on Mondays. As seating is limited, customers are encouraged to call ahead.

On The Border and Shake Shack open in Busan

Los Amigos Mexican Kitchen to be opened up in Haeundae