Sugar cravings are extremely common and hard to resist, especially when you’re on a diet.

My New Year’s plan to avoid sugar was going quite well until I opened a box full of sweets. Thanks to social media, I saw a post featuring beautifully glazed doughnuts in Pyeongtaek. Since then, my sugar cravings took hold and I had to try one of these fluffy rings of perfection.

Cosmic Cat Donuts, down a narrow alley at the Pyeongtaek International Central Market, always has a long line outside. I arrived 15 minutes before it opened at noon, and there were already many people waiting for doughnuts. As soon as the shop’s doors opened, their delicious creations were flying off the shelves. 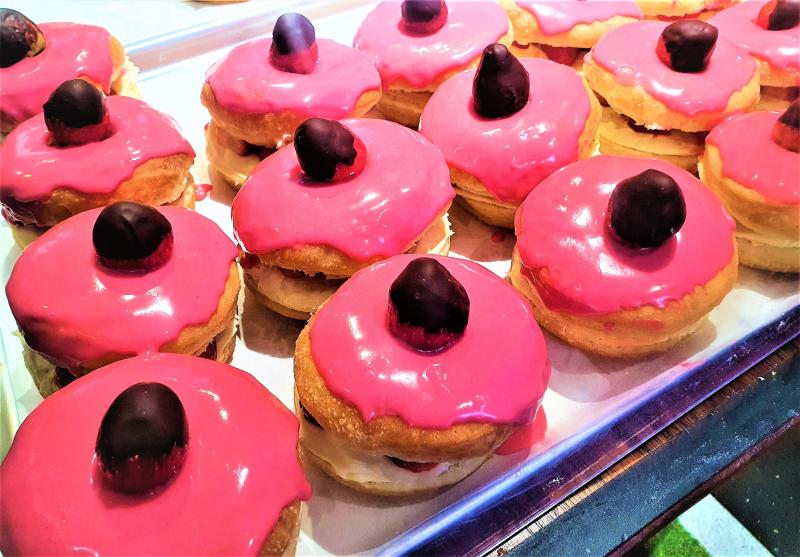 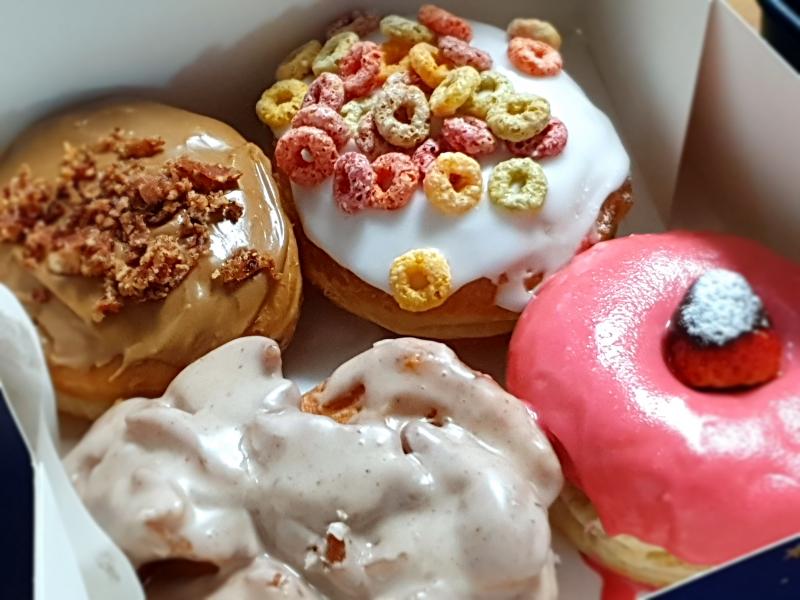 The small doughnut joint opened in February and is run by Jegal Goeun and her fiancé, Sunny. Jegal is a bread-lover, but decided to learn how to make doughnuts and open her shop when she realized there was no one else in Pyeongtaek selling these sweet treats.

Its purple color interior and exterior made me easily distinguish the shop from other businesses in the same alley. Cosmic Cat Donuts also has a fun space cat logo which adds to the hip, cool atmosphere. Jegal said she owns four cats, so the logo and name make sense.

Every morning, when most of us are still sleeping, the delicious doughnuts are baked fresh. Make plans to get there earlier than opening time; as Jegal said, they usually sellout within an hour. You’ll be lucky to find a seat inside, so grab some doughnuts to go and take advantage of their pre-order option.

Check their Instagram account to see what special flavors Jegal has in store for you that day.

At this place, doughnuts are treated like they’re art in a gallery and displayed in a case fit for jewels. They all looked too delicious to eat during my visit, but I opted for a strawberry cream cheese, Jupiter Fritter, Space Rainbow, and Maple Bacon doughnuts.

I felt guilty for breaking my three-month sugar detox, but I promised myself I would enjoy these treats in moderation. I opened the box carefully and bit into the strawberry cream cheese first. I was lured by this doughnut (6,000 won or $5.29) because its pink glaze reminded me of the doughnuts Homer Simpson loves in the animated show. This doughnut was stuffed with cream cheese, glazed with strawberry frosting and topped with a fresh chocolate-dipped strawberry. The sweet and salty combination was delightful.

I kept the rest of the fluffy rounds in the refrigerator and kept my promise. I don't know why, but the doughnuts from the freezer were more delicious.

The next day, I indulged in maple bacon doughnut (4,500 won) and I quickly realized why this is the shop's most popular doughnut. Its maple cream frosting and bacon bit sprinkles blew my mind. I swear this doughnut should be illegal— they’re that good!

The next sacrifice was the Space Rainbow doughnut (3,500 won). The sugar-glazed doughnut is infused with generous blueberry cream cheese for the most interesting and pleasing texture. Then, it is topped off with rainbow cereal for an impressive and photogenic finish. This colorful doughnut was so fluffy and tasty.

If you visit, the old-fashioned Jupiter Fritter (3,500 won) is a must! It is a simple doughnut with a delicious crunch on the outside and fluffiness on the inside.

The inexpensive coffee will give you one more reason to visit this place. You can grab a warm cup of drip coffee for just 1,000 won to pair with your delicious doughnuts. The menu also offers various teas, boozy coffee drinks and banana bread pudding that is made with doughnuts.

My trip to Cosmic Cat Donuts was definitely sweet and gave me an incredible doughnut experience. Though I broke my sugar fast, it was definitely worth it! If you’re like me, this will probably be your new favorite place to get your sweets fix. 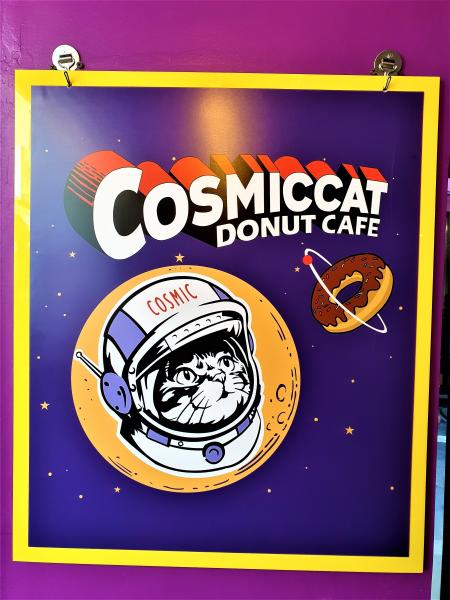 VIDEO| Let's make our own Okinawan donuts at home!