Enjoy Shabu Shabu with a Stunning View at Shabu Maxim

Enjoy Shabu Shabu with a Stunning View at Shabu Maxim

As winter has started settling in, what better way to warm up than with a hot dish of shabu shabu?

Shabu shabu is a classic Japanese hotpot dish cooked in an onomatopoeic-style with thinly sliced meat and a variety of sliced vegetables served with dipping sauces that has always been quite popular amongst the locals in Busan.

The name of the dish derives from the Japanese for “swish swish” from the sound the meat makes when simmering in the broth.

Shabu Maxim in Songjeong is one of many popular places around the city specializing in the dish. A great thing about this place is that you can enjoy as many vegetables within 100 minutes if your order includes the salad bar.

With its clean and inviting atmosphere and with stunning views of the ocean, you can heal the winter blues while enjoying a delicious meal at an affordable price.

Sets run from 16,900 to 25,900 won and if you don’t need any other special kinds of mushrooms other than the ones offered in the salad bar, you’ll be fine just ordering one of the two cheaper sets.

My dining companion and I ordered the most expensive set menu, which was the “mushroom+beef+Vietmanese rice paper+salad bar” for two served for 25,900 won per person.

The taste of shabu shabu mostly depends on how you make it, so the most important thing is the ingredients and the freshness of the vegetables.

A nice variety of veggies were on offer here which mixed with their kombu dashi, or broth, really brought out the flavors when we added meat and mushrooms and wrapped them in the Vietnamese rice paper.

Be warned — come with an appetite, as with most shabu shabu restaurants, there is a lot of food on offer.

Reservations are recommended for tables by the window or for bigger groups. Parking is limited but possible.

Shabu Maxim is part of a chain and the Songjeong location is their flagship restaurant.

There are three more Shabu Maxim in Busan in Millak-dong, Centum, and Dadaepo, and the prices can be slightly different.

There is also another location in Gimhae as well. 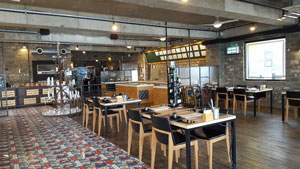 More fruits, veggies: Adding color to the menu can help improve your health