Frankly, not the meal I expected from Seoul-favorite Frank Burger

Frankly, not the meal I expected from Seoul-favorite Frank Burger

Every once in a while, an overwhelming desire for a juicy burger hits me. This time my craving brought me to a burger joint in Yongi-dong that’s garnered a lot of attention from the food blogger scene.

Frank Burger, a chain from Seoul’s hippest neighborhood Hongdae, has a location near Yongjuk Elementary School in Yongi-dong. Its signage looks similar to Shake Shack, so I was curious to see if this burger would also match up to the American chain.

Inside the small restaurant, most of the customers were opting to take-out rather than dine-in, but there was enough seating for a few people. At the digital screen kiosk, I ordered the double cheeseburger for 6,900 won (or $5.60) to enjoy the deep meaty flavor and a side of cheese fries for 3,500 won.

The Frank Burger menu offers various options including spicy chicken tenders, cheeseballs, cheese sticks, milk shakes and more. One of the benefits of dining in— they offer drink refills, a rarity in South Korean restaurants.

My burger arrived topped with buttery potato buns. They looked great but after a few bites, turned a bit soggy. The meat patties also weren’t the best, so I was a little disappointed by this burger. The thin fries were under seasoned and grew cold pretty quickly. I ordered a vanilla milk shake (3,500 won) to dip my fries in but even that trick did not work. The milk shake was neither milky nor did it have much vanilla flavor.

To be frank, despite the hype, Frank Burger was not what I expected. If you find yourself in the neighborhood, give it a try but don’t be fooled by the familiar logo or the buttery buns, this place wasn’t worth the trip for me. Maybe you’ll have better luck. 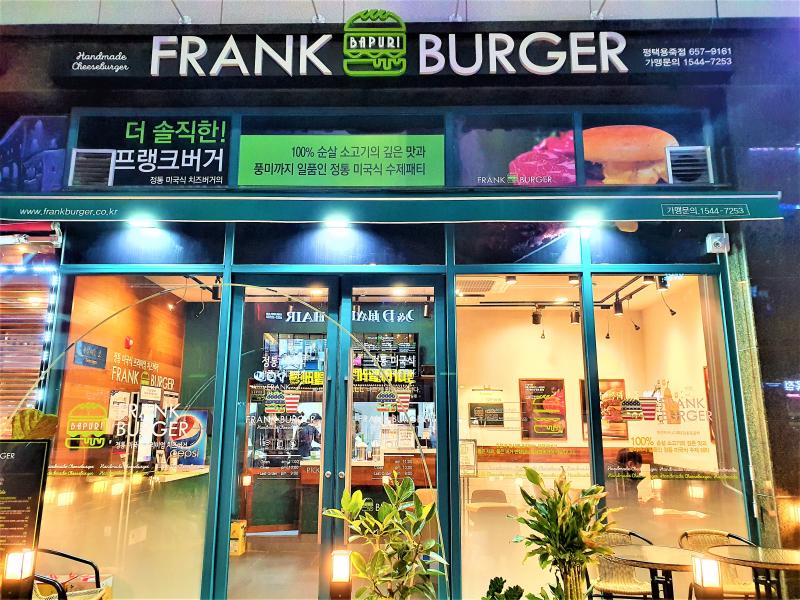 No Brand Burger opens its first store in Busan