Raw fish is a favorite dish for locals, prepared in slices and served as-is, as far away from the grill as possible. Though it’s known as food that originates from Japanese sashimi, Koreans have actually enjoyed sliced raw fish since the days of the Goryeo and Joseon Dynasty eras.

The most distinct feature of raw fish dishes in Busan is the preparation, the slicing of live fish right before serving. Whereas the Japanese store fish to tenderize it, Koreans prefer the firm texture and flavor of the freshest possible fish. Raw fish is usually eaten with chojang (red chili-pepper with vinegar) or soy sauce with wasabi, and to truly let the flavors shine, paired with lettuce, perilla leaves and garlic.

White fish such as flatfish, rockfish and bass have a sticky and somewhat chewy texture raw. Red fish such as mackerel, one of the symbols of the city, must be eaten immediately after being caught for the optimal aromatic flavor without smell.

Where to go eat 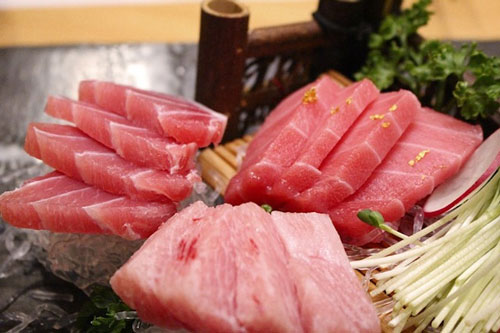 Located in Millak-dong, close to Gwangalli Beach, the Millak quay area is one of the city’s hubs for raw fish, complete with a large-scale building for receiving the fresh fish, surrounded by restaurants able to prepare it.

Once you’ve arrived at the Millak Raw Fish Center, take a seat somewhere inside Millak Waterfront Park. Frequented by couples, families and friends in search of a night view of the Gwangan Bridge, the park is the perfect place for a cold drink and a plate of fresh fish.

How to get there: Get off at Gwangan Station (Metro line 2) and go out exit 5. Walk toward the beach to find the Gwangalli Entrance bus stop. Take bus No. 83-1 and get off at the Millak Waterfront Park bus stop, or take bus No. 210 out of exit 1 at Millak Station. 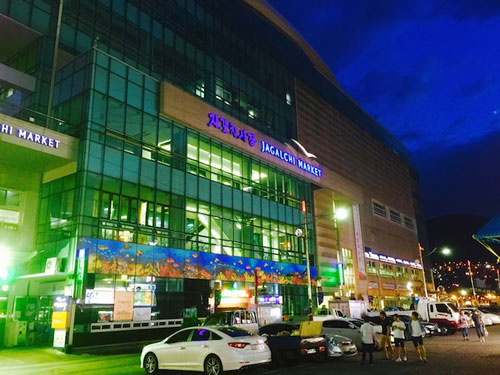 Busan’s iconic Jagalchi Market is the face of Korean fish markets and hands-down the best place around to eat fresh fish. Anyone who has been to Jagalchi has likely felt the power of the notorious ajummas, middle-aged women, merchants’ vibrant calls as they serve their daily offerings.

Fish stalls line each alley of the market while more than 100 raw fish restaurants are concentrated in a single central building. Step inside this raw fish center to choose fish from plentiful aquariums and take the selection to a restaurant of choice.

Outside, the ajummas, voices thick with Busan accents, call out to prospective customers from beneath parasols. Jagalchi is just as much a feast for the eyes as it is for the taste buds.

How to get there: Get off at Jagalchi Station (Metro line 1) and go out exit 10. Walk straight and take the first alley on the right to find Jagalchi Market.