Among hundreds of options of tsumami dishes, the following are extremely popular and are standard at most izakaya in Japan. Memorize a few or take this handy guide with you so you can drink and eat like a local on your next night out. 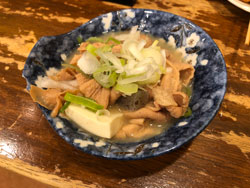 Nikomi: Pork or beef offal stew with vegetables such as carrots and radish in a miso-based soup. We usually sample it with shichimi spice powder (mixed with Japanese chili pepper, ground sansho and hemp seed), which gives it a little kick. 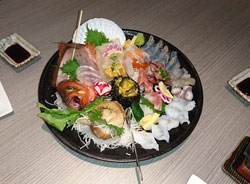 Sashimi: This is one of the most popular tsumami dishes consisting of sliced fish, usually tuna, yellowtail, squid, horse mackerel or salmon. We usually sample them by dipping in soy sauce with wasabi. 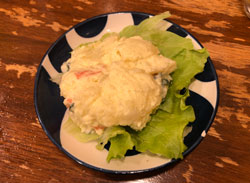 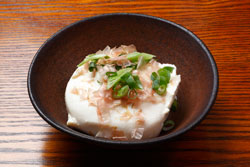 Tofu: There are several variations. Hiyayakko, chilled tofu with grated ginger, green onion and bonito flakes, is known as a great tsumami to cool you down on the hot summer night. Yudofu, warmed tofu with mustard, green onion and sour soy sauce, is great to sample with warm sake on a cold night. 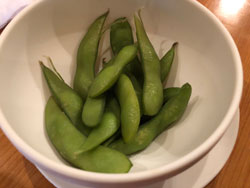 Edamame: Boiled or steamed green soybean pods usually served with salt. We push the beans out of pods when we sample one. This tsumami dish can go along with virtually any type of liquor and is considered as a standard starter for any party. 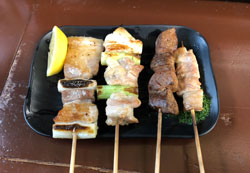 Yakitori: Despite literally meaning “grilled chicken,” yakitori is used as the general term for all skewered and grilled items. They include negima (a skewer of small pieces of chicken thigh), sasami (a skewer of minced chicken) and butabara (a skewer of pork rib). When you order one, you usually can choose to have them grilled with salt or soy-sauce based broth (tare). 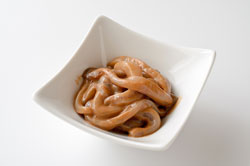 Shiokara: Salted and fermented squid guts. It has a chewy texture and a fishy and salty taste. The squid is thinly sliced so you can eat just a little bit at a time. 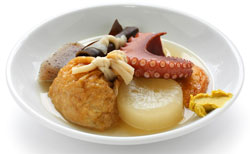 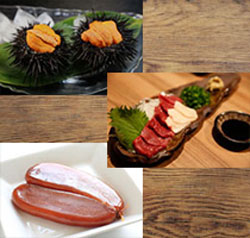 You may consider them weird, but they pair well with traditional Japanese liquors (sake and shochu). Don’t hesitate to try one when they are available!

Paying homage to a Japanese classic