Healthy Korean greens you should know

Healthy Korean greens you should know

For those of us who’ve grown up abroad, shopping at Korean grocery stores can be both a beautiful and bewildering experience. What is this root? This tangle of leaves? How can I make it delicious?

Unfortunately, marts and markets don’t make it easy to taste the ingredients, or buy small amounts for recipe testing. This season especially, the markets are full of bom-namul, or spring greens, which are inexpensive, delicious and healthy ingredients that you’ll definitely want in your kitchen. So we hope that this short guide to ten basic bom-namul will help get you started (if you haven’t already). There are so many more, but this is just the start! Let us know in the comments how you cook with your bom-namul.

1. Naengi (냉이): Commonly known as shepherd’s purse in English, this spring green is the first to appear at the end of winter and has a unique fragrance. Keep the roots (they’re nutty and delicious) but make sure to scrub off all the dirt. Don’t eat these raw: Blanch until the roots are tender and mix with doenjang or add to soups. Naengi also makes a great pesto and pizza topping. In season usually from late winter to mid-spring. 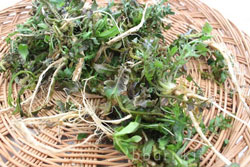 2. Dallae (달래): Also called Korean wild chive in English. Another early spring namul, dallae has a similar flavor profile to chives but is slightly milder, which makes it great for eating raw, mixed with a soy sauce dressing. You can also chop and add it to soy sauce, soups and stews, or mix it in with your jeon (savory pancake) batter. Add it to your doenjang soups at the last minute so dallae keeps its nice aroma. 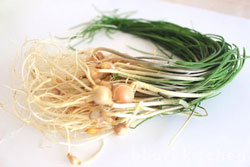 3. Ssuk (쑥): Translating “ssuk” is tricky, but it’s often called mugwort in English. When ssuk arrives in the markets, you know spring is here. It has a very herbal, almost eucalyptus-like fragrance and it best in mid-spring, before Dano (the 5th of May on the lunar calendar). Ssuk is most commonly eaten in doenjang-based soups or made into rice cakes. You can also deep fry your ssuk for something nice and crisp. 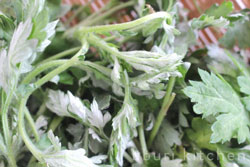 4. Cham-namul (참나물): There’s no good English translation for cham-namul, and that’s probably because it’s not widely known outside of Asia. Its smooth, bright green leaves and crunchy have a fresh, grassy aroma, and it can be eaten raw or blanched. Blanch and season with Joseon ganjang (original soy sauce) or even just with salt for a nice spring banchan. Try adding it to your salads or using it as a garnish. 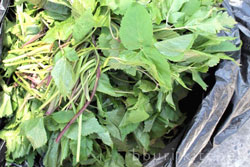 5. Chui-namul (취나물): Though it bears a passing resemblance to cham-namul, chui-namul leaves are somewhat furry and have a slightly thicker, tougher texture. For the reason, it’s not usually eaten un-cooked. Blanch and season with Joseon ganjang to make another popular spring banchan. 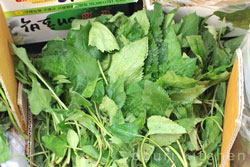 6. Saebal-namul (세발나물): This namul is a kind of saltmarsh sand-spurry, a pleasantly crunchy, thin, segmented plant that grows (as the name suggests) in brackish marsh areas.

Saebal namul is great when eaten raw, use it in salads or even as a garnish. Koreans like to mix it with a soy sauce dressing. Don’t over-salt—this plant has a naturally salty aftertaste. 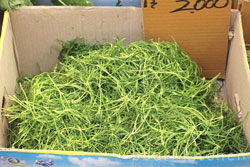 7. Dol-namul (돌나물): Dol-namul, or stringy stonecrop, is a leafy succulent that grows well (surprise, surprise) on rocky soil—you may sometimes come across a stone wall covered in dol-namul in the spring.

It has a somewhat mineral flavor, and some say it has almost no flavor at all, so it’s an easy green to toss into all kinds of salads. It pairs particularly well with sweet citrus fruits like oranges or tangerines. Koreans love to use dol-namul in mul-kimchi (water kimchi),especially in the spring. 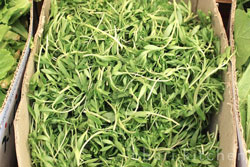 8. Gomchwi (곰취): Some say this namul was named for the bears (gom) who like to eat it. Gomchwi has a lovely fan-shaped leaf and a pungent, bittersweet flavor. It’s also pricier than most other bom-namul, especially since these days it’s pretty trendy and is said to be loaded with beta carotene. Steam and use it for ssam (wraps), pickle it in soy sauce, add it fresh to salads, or blanch and mix with seasonings as a banchan. 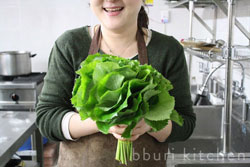 9. Bireum-namul (비름나물): Bireum-namul is in the amaranth family, and can be thought of as a summer spinach. It’s a wild green that grows abundantly in the countryside and tends to be foraged rather than planted and harvested. It’s one of the last bom-namul of spring, so you know that summer is right around the corner when it begins to grow. Bireum-namul has a fairly earthy and nutty flavor, and goes well with both gochujang and Joseon ganjang. Simply blanch and season for a tasty banchan dish. 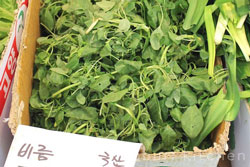 10. Dureup (두릅): This is the only bom-namul on this list that comes from a tree. The young shoots of Aralia elata (a kind of angelica tree) are trimmed and brought to market in late spring. 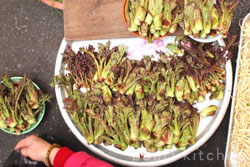 Like many bom-namul, dureup has a very nice, slightly bitter flavor. It is often eaten blanched and served with cho-gochujang (vinegared gochujang for dipping). Skewer with beef and lightly batter and fry to make a nice main dish.

Grill up these 5 healthy foods for an epic summer BBQ

Get your greens!: Try a healthy spin on a breakfast favorite

How we eat in South Korea

Korea Kitchen: Easy recipe to make your own tasty Bulgogi