How to throw a dinner party for friends in Korea

How to throw a dinner party for friends in Korea

My dad recently gave me some pears he brought from my uncle’s pear farm. Have you ever tried Korean pears? They are big, sweet and juicy. Their skin glows a bright yellow. Korean pears are unlike most fruit in North America, so there is no way to explain how amazing they taste. I love them a lot, but I couldn’t eat all of them alone. So, I thought I’d share them with my friends. But since I was going to have people over anyway, I decided to have a dinner party.
My good friend Abraham, an airman in the U.S. Air Force that I have known for years, just returned to Korea so it was a great excuse for a party. Along with Abraham, I invited Brian, a good friend and a U.S. soldier, and my sister. To me, cooking for your favorite people is a great way to show how much you care about them.
This time of the year, my family always takes a daytrip near the sea to eat a bunch of shrimp. Most Koreans believe the best way to cook shrimp is to roast them in coarse salt. Jumbo shrimp is the perfect seasonal food for a fall dinner party. I also decided to make a couple of other easy and fantastic dishes that would impress my American friends. The dinner party was a lot of fun, but so was the preparation. Give this a read, then plan your own dinner party!

Everyone, please pay attention! With this simple lesson, you’ll be able to buy anything you want by speaking Korean, which will improve your quality of life here! 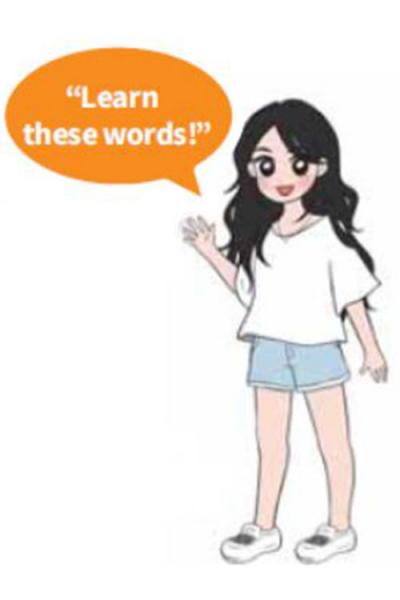 *Adding yo at end of a sentence makes it more formal.

At a fish shop 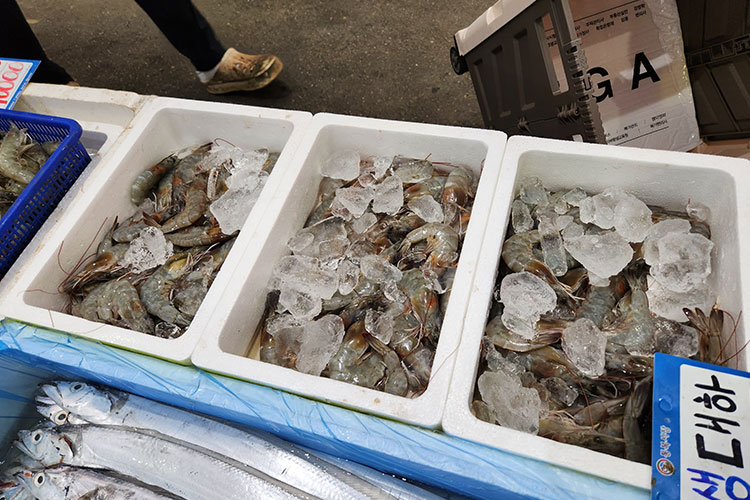 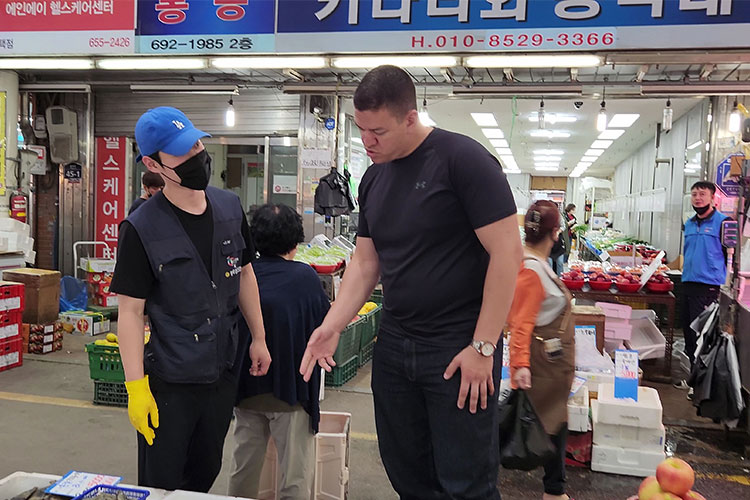 He bought three boxes of jumbo shrimp at a discounted price since the vendor wanted to get rid of everything. It was total 30,000 won. He’s off to a great start!

At a salt shop 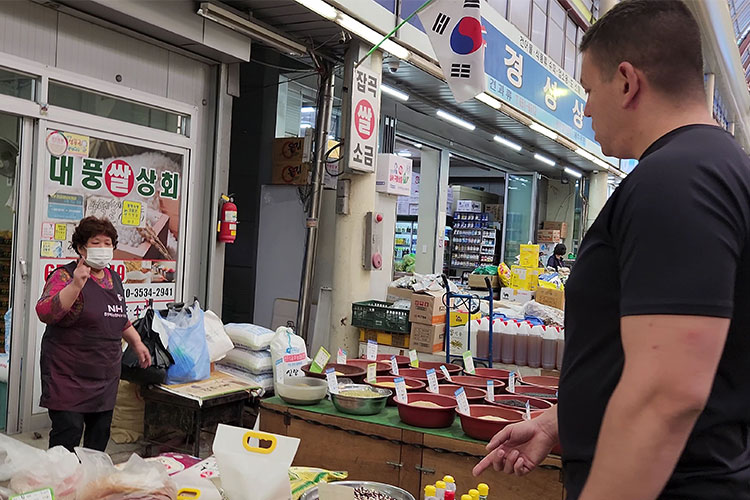 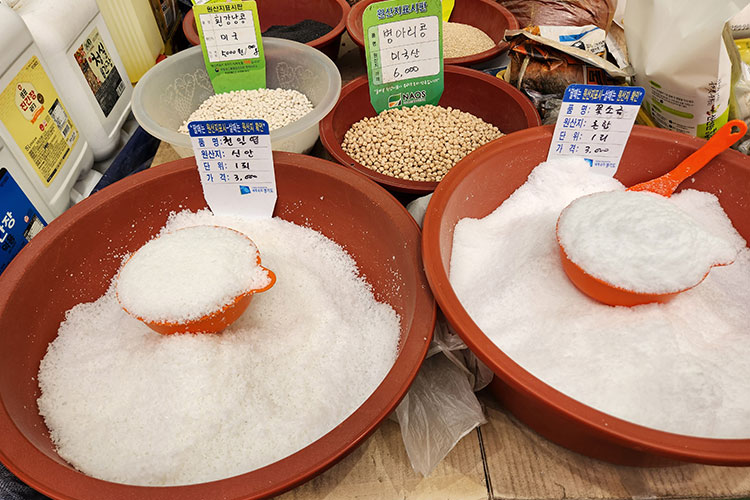 He forgot how to say “Eolmayeyo?” (How much is it?)

Brian and vendor: “Gamsahapnida” (Thank you) 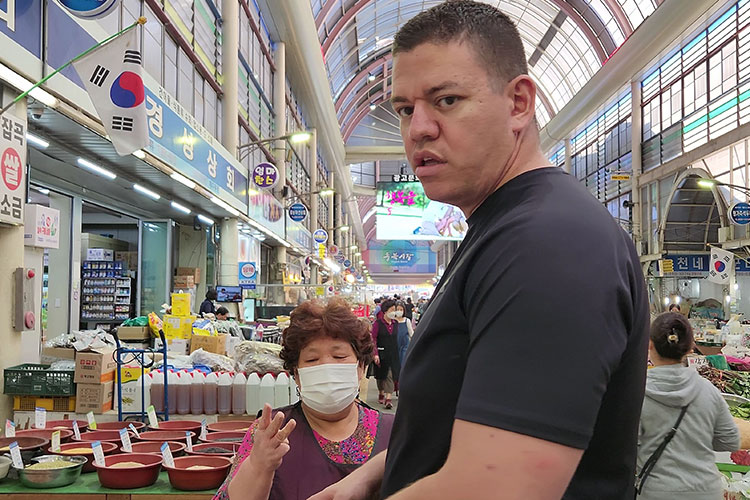 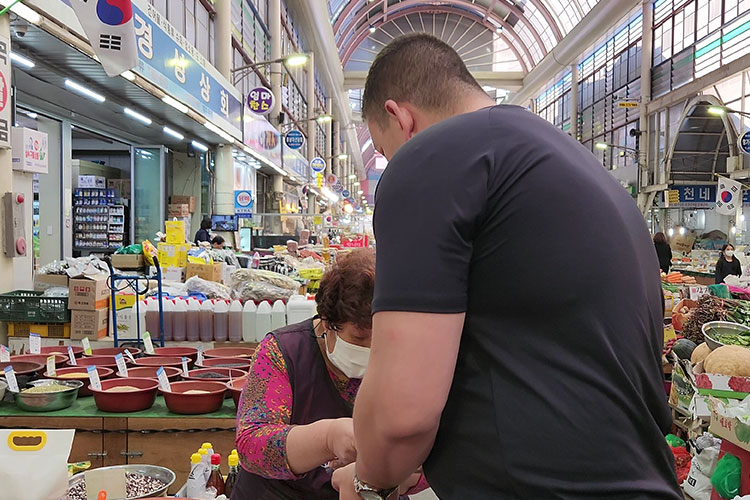 Brian successfully completed his mission! He looked a bit tired, but said he felt great about his improvement in speaking Korean. I was very proud of him, too. I understand it’s not easy shopping in a foreign country, but let’s focus on positive. The experience of living abroad will give you many challenges (and achievements), which will broaden your horizons.

Once you start using even a little bit of Korean, your life in Korea will be completely different. I recommend you try the simple words and phrases Brian used while you are at convenience stores, markets and restaurants. Believe me, once we try speaking Korean when you are out and about, it will be one of your favorite parts of your journey in Korea! Just ask Brian!

Fun in the kitchen!

However, when we all met up, I quickly realized there was nothing to worry about. The three of us have many things in common. Both of my friends are from a Mexican family and I used to live in South America, so we love Latin music, shrimp, and spicy food. We had a great time cooking and listening to Latin music together! 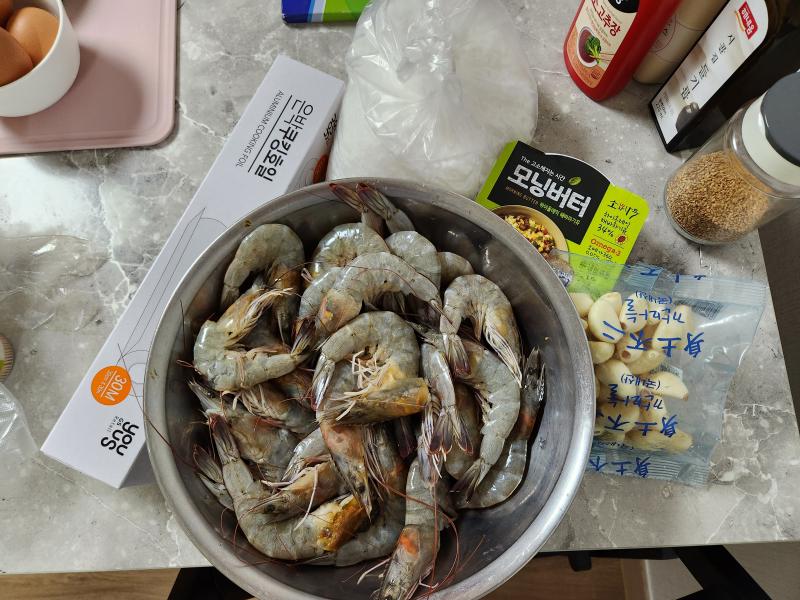 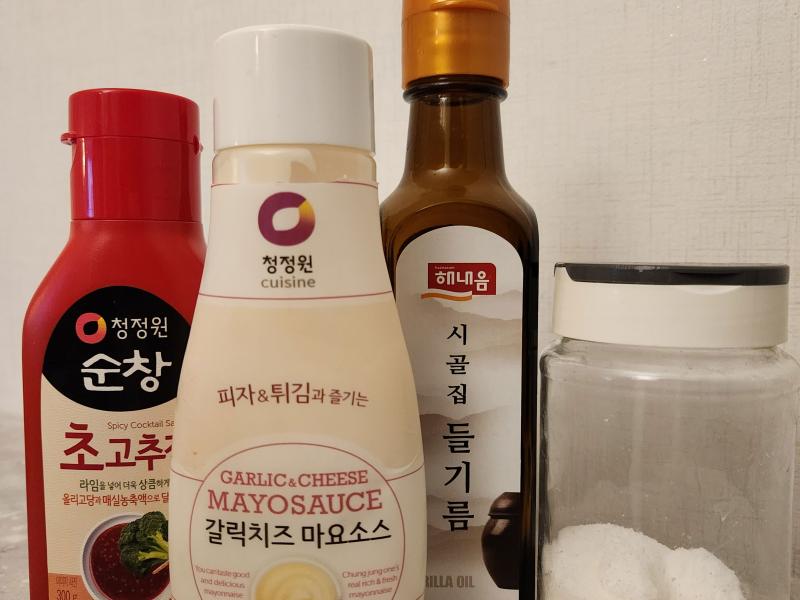 Koreans usually roast shrimp only with salt but I added garlic and butter. Also, this food usually comes with a Korean dipping sauce made of chili pepper paste and vinegar or sesame oil, but I prepared a garlic and cheese mayo sauce for my American friends.

❶ Wash shrimp and remove vein if you don’t like them. You can use a knife or toothpick to pull out the vein.

❷ Wash garlic and cut the butter into pieces.

❸ Lay one or two pieces of aluminum foil on a pan then put coarse salt, shrimp, garlic and butter on it. 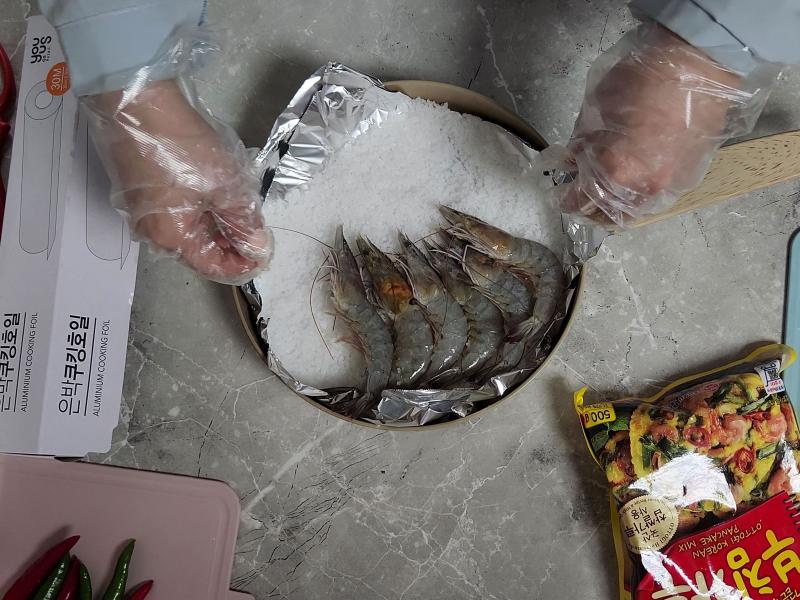 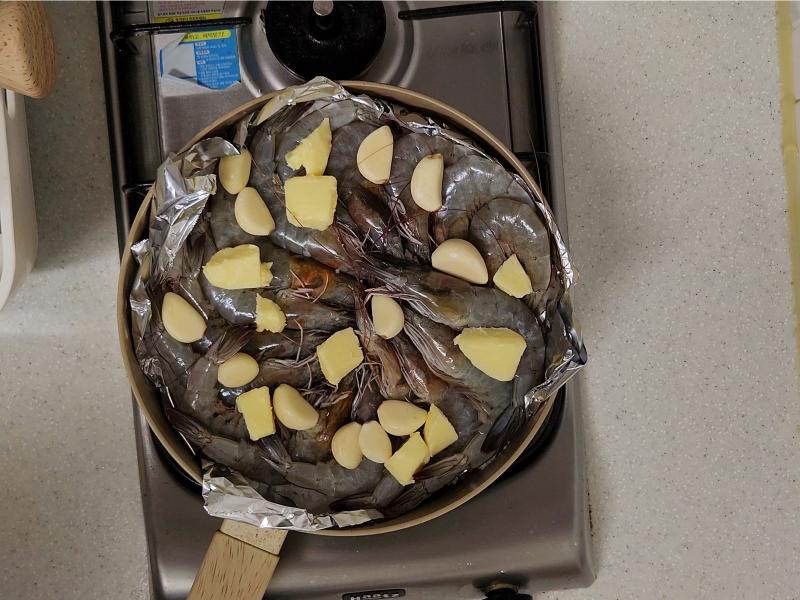 ❹ Put the lid on the pan and cook over a medium heat for 8-10 minutes. 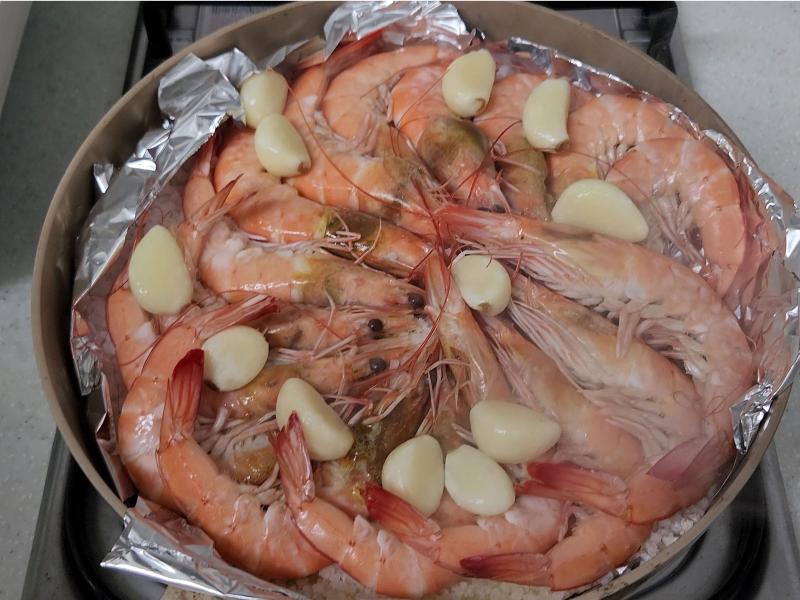 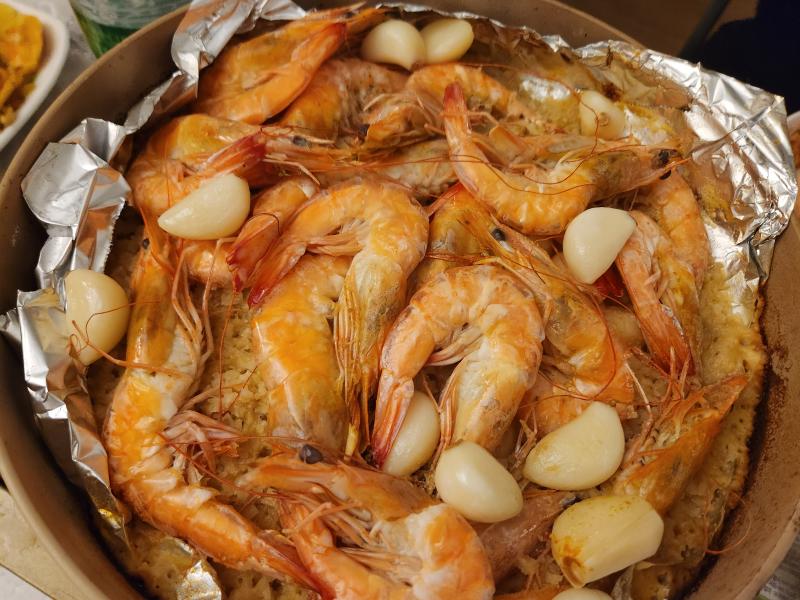 Korean pankcake with shrimp and pepper

I was trying to feed 4 people, including myself, so I used one bag (500g) of Korean pancake mix. 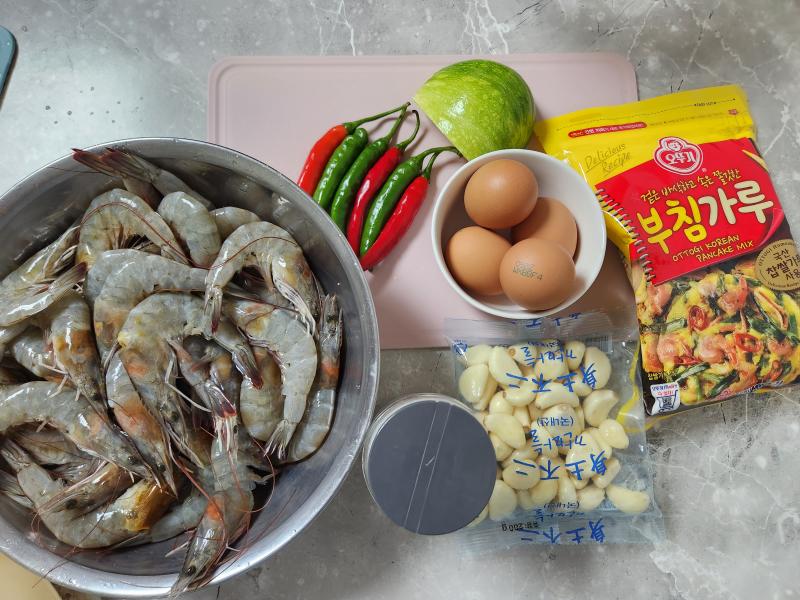 ❶ Remove the shell, head, tail and vein from shrimp.

❺ Put all ingredients together and add one tablespoon of salt. Stir until it’s all mixed. 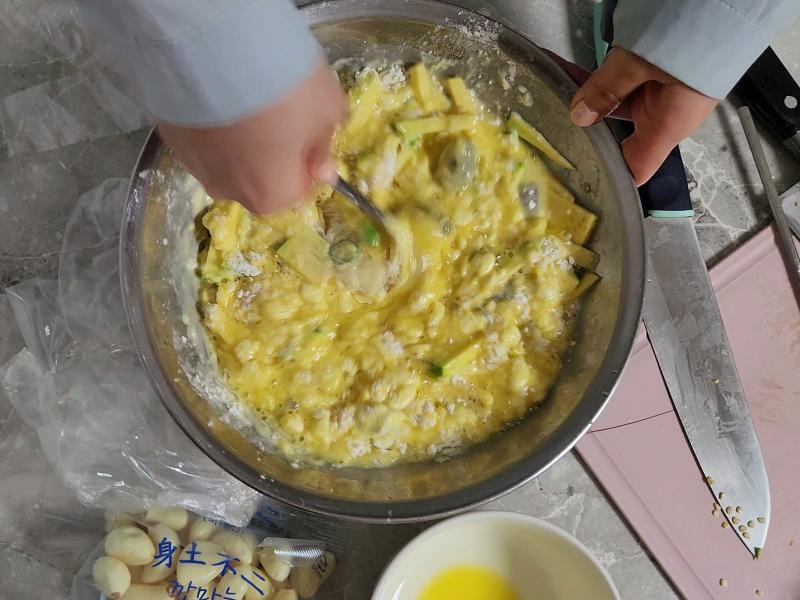 ❻ Heat a pan on medium coat it with the oil. Make sure to pour enough oil.

❼ Pour batter to coat the bottom of the pan and add more shrimp! 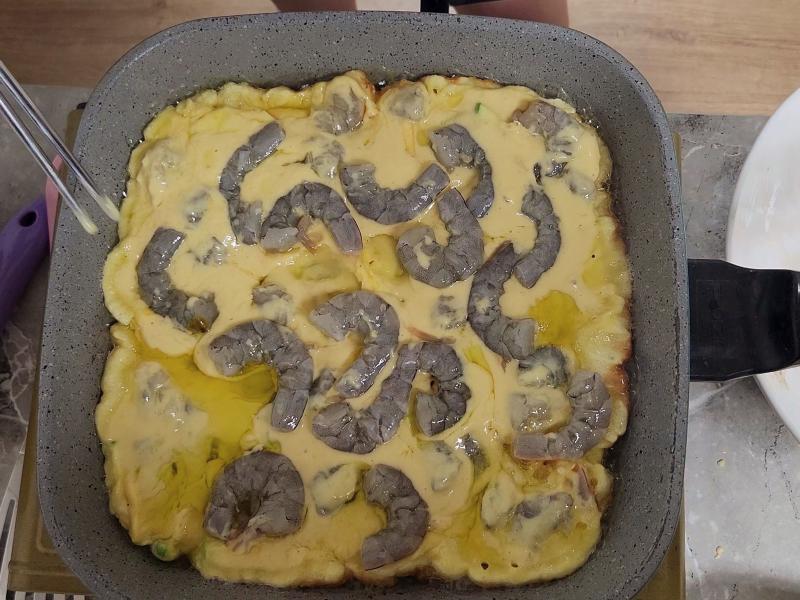 ❽ Cook for 4-5 minutes until the bottom turns golden brown.

❾ Flip the pancake and add more oil. Then heat another 3-4 minutes. 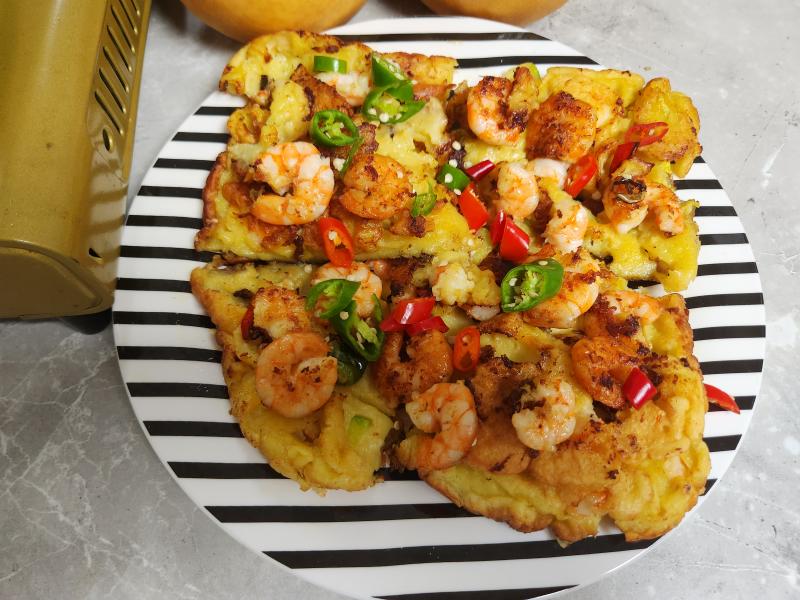 Oh, no! I burned the bottom while chatting with my friends.

“I can’t show this burned pancake to our readers!” I screamed.

Brian tried to calm me down. “If an Army guy tries your recipe, he’ll burn it, too,” he said assuredly. “It’s a real lesson, so don’t worry!”

“Yes, the troops won’t care as long as it tastes good,” Abraham chimed in.

“But what if some military spouses who love cooking want to try my recipe?” I worried out loud.

My two good friends helped me hide the ugly part of the pancake. The colorful chili peppers were definitely helpful.

This joint operation of the U.S. Army, U.S. Air Force and a Korean to cook Korean dishes was a success! 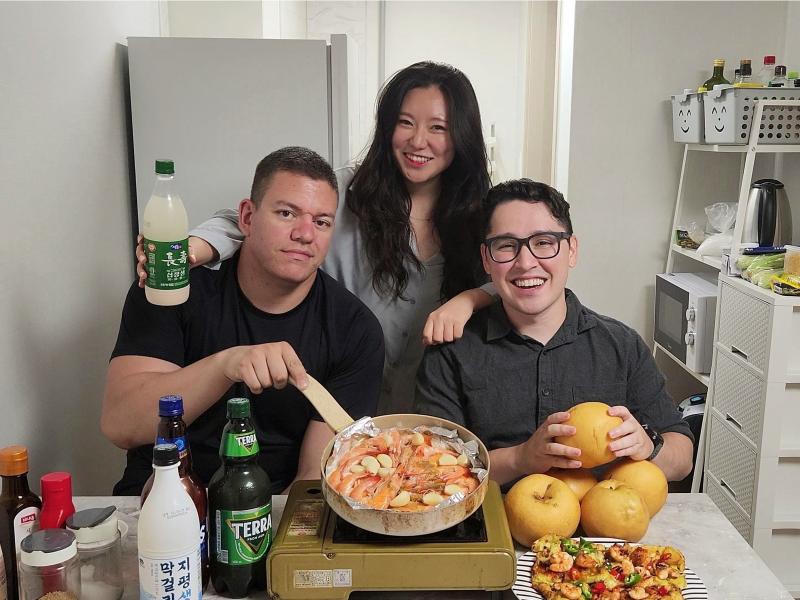 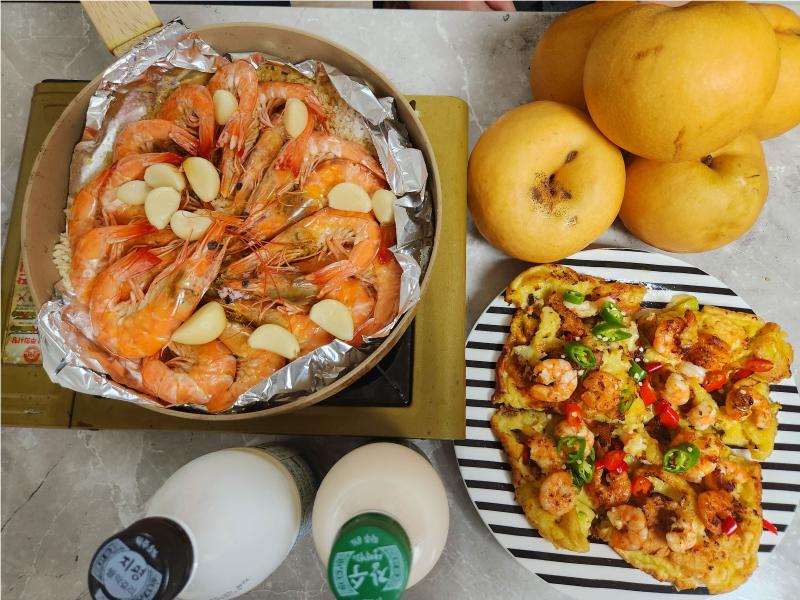 We raised our glasses and enthusiastically toasted in Korean: “Geonbae (cheers)!”

And then it was time to eat. I was so happy when my guests said they were amazed how delicious the roasted shrimp were. The garlic, salt, and butter really brought out the flavor of the shrimp.

The shrimp was delicious as it was, but we also had the option of two sauces.

“What is this sauce? It makes the shrimp even more delicious!” Abraham asked as he pointed to the garlic and cheese mayo sauce I had bought. Honestly, it paired even better than the Korean sauce we also had. I’d recommend getting the mayo sauce if you plan to try roasted shrimp with salt.

My favorite part of the dinner was drinking makgeolli with the shrimp and hot pepper pancakes we made. The sweet, sour and soft flavors of the Makgeolli stunningly paired well with the crispy and spicy pancake. Makgeolli is known as a traditional drink that goes well with all Korean foods, but especially pancakes. That’s the reason I chose it as the dinner drink. I was happy my guests enjoyed all the Korean food we cooked, as it was their first time eating a Korean feast like this.

We devoured all the food. I kept making pancakes until all the ingredients were gone. And the shrimp? Those three boxes Brian purchased at the store were empty. And our stomachs were full.

Great food. Tasty drinks. Lots of laughs. It was the perfect dinner party! 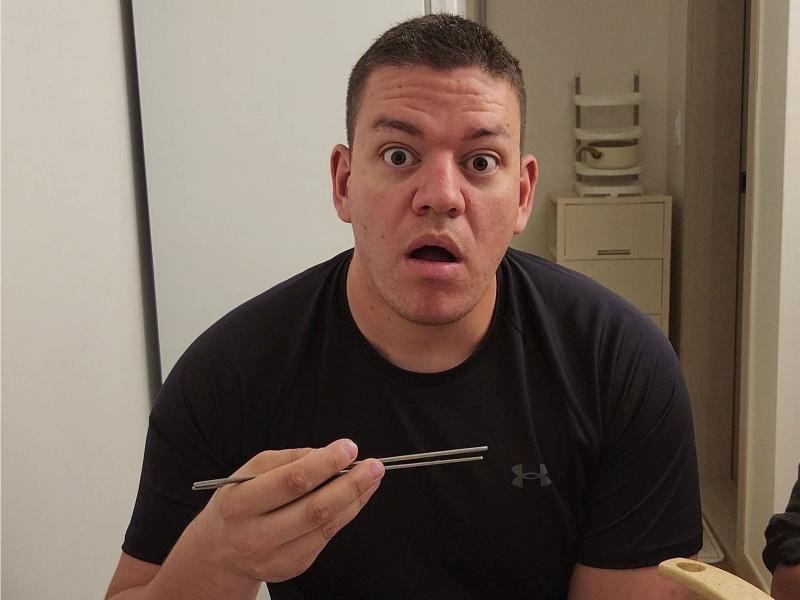 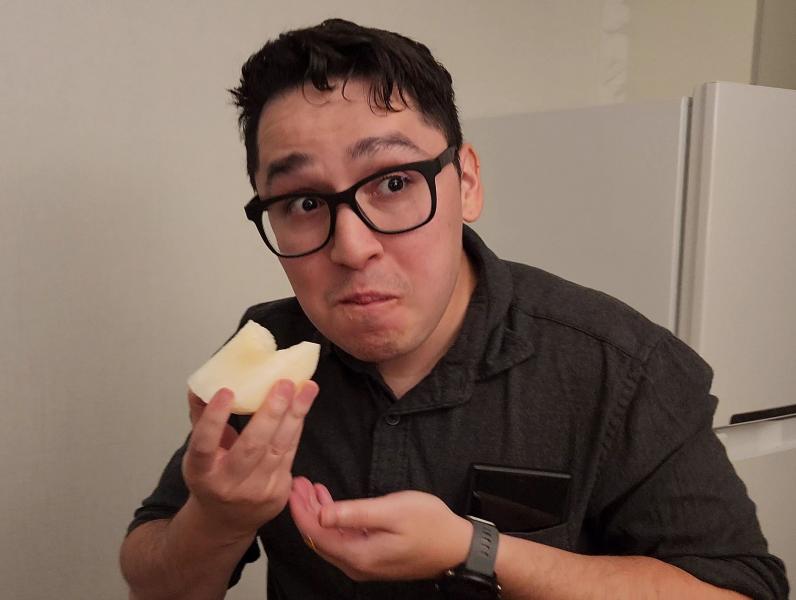 Comments from the guests