If you’re American, all things pumpkin might be your go-to for fall and the holiday. But in Korea, pears, apples, tangerines and persimmons reign king. For me, the persimmon is the definite representation that fall has arrived in Korea. Sweet persimmons are beloved in Korea and the bright orange fruit is considered a jewel of the season.

This time of year, you will find these gems everywhere, from traditional markets, small grocery stores to big shopping malls at varying prices.

Korea has two major varieties of persimmon: dan-gam (fuyu persimmons) and ddeolbeun-gam (hachiya persimmons). More than a few Koreans get the two confused and even use them interchangeably since the delicious and prevalent persimmons can be a bit of a tricky fruit.

Both persimmons can range from light yellow-orange to a deeper, richer carrot-like hue, however, dan-gam and ddeolbeun-gam have distinct differences in their astringency, the way they are prepared and how they are eaten.

The dan-gam, which literally means “sweet persimmon,” was introduced to Korea in 1920 by a Japanese botanist during the Japanese colonial rule. They are a very different texture from their close relative, the ddeolbeun-gam.

Featuring its squat-shaped figure, the dan-gam variety can be eaten while still hard or soft like watermelon. Its flavor profile is sweet and crisp. Similar to apples, Koreans enjoy the fruit by itself or adding slices to their salads.

Known as hachiya persimmons in English, ddeolbeun-gam, on the other hand, are mostly acorn-shaped, but you will find some similar in shape and size to dan-gam. These, however, should not be consumed until they are soft and completely ripe or else suffer the extremely bitter consequences.

Eventually, the fruit sweetens as it ripens and is the basis for almost all of the persimmon treat and pastry recipes. Ddeolbeun-gam’s sweetness is preferred over dan-gams for this very reason.

Hongsi is the ripest version of ddeolbeun-gam. Many Koreans also refer to this one as “yeonsi.” Both are soft, but the hongsi typically ripens on the branch and yeonsi is picked and put through an artificial after-ripening process.  Despite how they get there, the sweet and rich tastes of the soft persimmons remains unchanged. 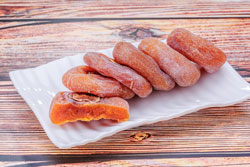 The dried persimmon, a traditional fruit snack called a got-gam, was my favorite when I was a child. Traditionally the dried persimmon was one of the key foods for the ancestral rite ceremony, and my mother used to set aside the sweet snack for me after ancestral rites on Seollal, the Lunar New Year’s Day, and Chuseok, Korean Thanksgiving Day. For me, Seollal and Chuseok are also days to enjoy got-gam, not just for greeting relatives and memorial services.

This is my new favorite fruit snack. Gam mallaeng-I is a specialty of Cheongdo, a city known for its flat persimmon. The persimmon is cut into bite-sized pieces which makes it an optimal snack for munching. Gam mallaeng-I is not prepared in a traditional process and requires a longer drying time than got-gam or other varieties, thus making the pieces a little chewier. Gam mallaeng-I first appeared in Cheongdo in 1996 and this delicacy is now available throughout the country.

Even if pumpkin is your favorite flavor of the holiday season, you just may find a new favorite in Korea’s fall fruit variety. Visit your local grocery store for all the different persimmon snacks and try them all!

Stationed in Korea? 14 dishes you should try

More fruits, veggies: Adding color to the menu can help improve your health

Strawberry Buffet with a variety of desserts at Lotte Hotel in Seomyeon, Busan

The benefits of colorful fruits and vegetables