Sub-par sushi, bulgogi, and sweet and sour pork — it’s everywhere. In your local supermarket, at the mall and in the dozens of buffet restaurants scattered throughout Seoul. And it’s not cheap, either. So what’s a foodie to do? To find the best sushi, bulgogi, and sweet and sour pork, Groove Korea tagged along with foodies from Japan, Korea and China as they scoured Seoul for their respective country’s best eats.

This month we’re on the hunt for Seoul’s best sushi.

Our judges on this outing were Naomi Sonobe from Sapporo, Japan, Hong Weiwei from Xiamen, China, Claire Lee from Seoul, and Jung Sun-ran from Seoul.

Our first stop was Kappa Sushi in Gangnam. 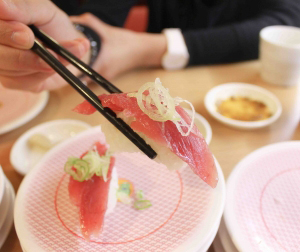 Kappa Sushi is a popular chain restaurant that originated in Japan. It has two locations in Seoul — Guro and Gangnam. We visited the Gangnam location.

People come here for two reasons: It’s very cheap and the sushi is actually pretty good. A plate of honmaguro (tuna belly nigiri) goes for 2,500 won and other sushi plates were available for 1,500 won apiece.

There’s a lot to choose from. The “sushi train” is packed with 54 selections of sushi, 19 different rolls, eight sashimi choices and 18 desserts.

Of note is the localized sushi. Samgyeopsal sushi, anyone? Hoemuchim sushi is another interesting choice (it’s sea bass with Korean spicy sauce). These were not our judges’ top choices.

Naomi, our Japanese judge, liked the atmosphere at Kappa Sushi. “This is more than a sushi restaurant, it is ‘sushi entertainment’ to some extent.” Indeed, Kappa Sushi made a name for itself in Japan by being a place for both sushi and entertainment.

Criticism: While we busily stuffed our faces with this exorbitantly cheap sushi, some problems did stand out. Not all the fish was thoroughly defrosted, and some didn’t look very fresh. However, it’s easy to overlook that when you factor in the price.

Praise: The sushi is good — easily above average in Seoul. As a bonus, free soft drinks are included with your order. The place is bustling, entertaining and high-tech.

Who: Overall, Kappa Sushi is a great place for those looking for value. It’s popular with students. 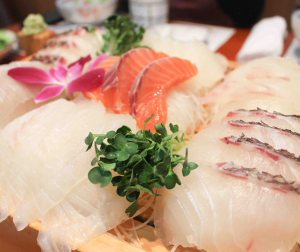 Mine Sushi is a renowned Japanese restaurant in the Yeoksam area of Seoul. The atmosphere is more refined than Kappa Sushi.

We ordered the lunch set for 25,000 won per person. Appetizers came at a steady pace: seaweed salad, porridge, grilled marrow, sashimi and vegetable tempura. But it was the sushi we were after, and it finally arrived after about 30 minutes. In front of us was a gorgeous compilation of sushi — sea bass nigiri, three rolls with avocado, crab meat, salmon, halibut nigiri and honmaguro.

The fish pieces were large, with the fish falling far over the edge of the rice. Points for scale. Interestingly, Naomi docked points for authenticity because of the order in which the food came out: According to her, sushi should come at the end of the meal in Japan, but Mine Sushi delivers it mid-course.

Criticism: It was pretty clear that presentation was prized over taste. “The fish-rice ratio was good, but the taste wasn’t impressive,” said Naomi. The customer service failed to meet our expectations. Waitresses simply had too much to do to give each private room the attention it deserved.

Praise: 25,000 won may sound pricy, but it is a fair price for the amount of food that is served.

Who: Mine Sushi is highly recommended for businessmen and middle-aged people with cash to burn on mediocre, but filling sushi. 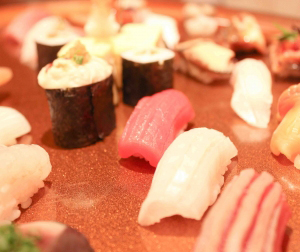 Kiyomizu is a high-end Japanese restaurant in the Sheraton Grande Walkerhill. Expectations for service and food are obviously sky-high.

As we walk through the doors at Kiyomizu, we’re greeted warmly by the staff before being led to our table. This place isn’t grand in scale, but it’s quiet and classy. Our window seat gave us a good view of the Han River. No disappointments so far.

We ordered the Sushi Set for lunch, which goes for 60,000 won per person — which comes as no surprise as this restaurant is located within a five-star hotel.

The sushi table faces chef Lee Gang-wook. I, being a sometimes-vegan, was pleased when he presented me with vegan sushi. It was fantastic, melt-in-your-mouth sushi. The chef is very accommodating and is known to create a number of vegan sushi options. He explained in detail every dish he served us. Lee also suggested sipping ocha — Japanese green tea — rather than the usual miso sup, saying that miso isn’t a good pair with high quality sushi, because it casts a shadow over the freshness of the fish. Perfect sushi, he said, needs to be fermented for six to seven hours.

At Kiyomizu, you get what you pay for. “Kiyomizu is the best sushi restaurant I have ever experienced in Korea,” said Naomi.

Criticism: Let’s face it, not everyone can afford to spend 60,000 won on a lunch set.

Praise: That said, this is some of the best sushi you’ll get outside of Japan. The customer service is superb and the atmosphere decadent.

Who: Kiyomizu is highly recommended if you’re looking to get your hands on some “real” sushi. (Or if you can get your fingers on your boss’ company card.) 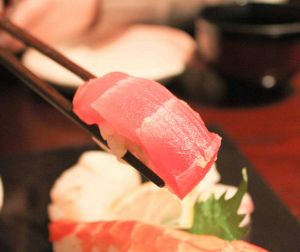 Shari-den, located in Gangnam, is famous because it has a Japanese executive chef. This, however, isn’t exclusively a sushi restaurant. It’s more of a high-end izakaya.

We began by ordering a plate of sushi and tofu salad. I wasn’t impressed with the sushi when it arrived; there was way too much rice, I thought. Shari-den gets points for presentation and quantity. Ten pieces of sushi were placed nicely on a black-stone plate.

“The taste and quality are fair. I would say it is quite high for Korea. It would pass in Japan,” said Naomi.

The price for the Sushi Moriawase set was a reasonable 27,000 won for 10 pieces.

There were many Japanese customers on the day we visited — so it must be doing something right. The wait staff speak Japanese, too, so it truly takes on the atmosphere of a Japanese restaurant, especially when the sake starts flowing.

“This restaurant is famous among Japanese residents in Korea,” said Naomi. “As an Izakaya, Shari-den is nice to come to, but considering only the sushi, it’s not up to snuff when compared to Kiyomizu and Ogawa.”

Praise: The head chef was very kind and no one will ever claim that this is a boring restaurant.

Who: Shari-den is a great place to go to experience a truly Japanese atmosphere in the heart of Seoul. Enjoy some sake and brush up on your Japanese.

Ogawa Sushi is a cozy restaurant located in a basement behind the Sejong Center for Performing Arts. Only 15 diners can occupy it at once, freeing the chef to spend more time focusing on each customer.

Ordering here doesn’t take much time or thought, as there are just three set menus — one for lunch, one for dinner and one for takeout. In terms of taste, it’s comparable to Kiyomizu, but differentiates itself with a less commercial, more intimate, feeling.

Interestingly, most of the sushi we ate here was half cooked. This cooking method is said to bring out the “true” taste of the fish. Naomi, however, was suspicious that it was a scheme to disguise the freshness of the ingredients.

I liked the simplicity and quality of the menu. The small dining room is made for a more relaxing, even fun ambiance. This is still a place that maintains an air of class.

Cost-wise, we spent more money here than anywhere else, with the only exception being Kiyomizu.

Criticism: Naomi still wasn’t impressed with the fish-rice ratio; “They serve a very small amount of rice, so I felt like it was more like a fish wrap.”

Praise: We all agreed that Ogawa Sushi is an elegant restaurant with a high-quality menu and professional service. As long as price isn’t an object, you will enjoy yourself thoroughly.

Who: Ogawa Sushi is for you if you’re willing to spend big on a cozy restaurant with professional service and excellent food. 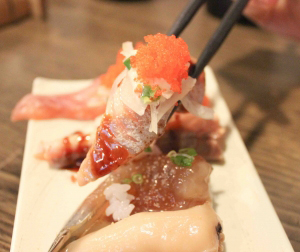 Gida Sushi is tucked into a small alley opposite Cheil Worldwide in Itaewon. The restaurant is always packed, owing mainly to its affordability. The first impression is that it is a lively and chatty place.

After finding our seats we scanned the menu. I understood immediately why Gida Sushi is famous in this area. A 10-piece sushi lunch box — not as easy to find in Seoul as in days past — will run you just 9,000 won. And I heard it’s pretty good, too.

We met for dinner, so ordered the Sushi Collection, which cost 18,000 won.

The atmosphere was alive and the food was cheap. I made a decision to return with some friends. It is very casual and affordable.

Criticism: All things considered, what do you expect for sushi under 1,000 won? We can’t complain.

Who: If you’re after a cheap night out with friends and want some booze to go with your sushi, then Gida Sushi won’t disappoint.

The opinions expressed here are those of the authors and do not necessarily represent Groove Korea. Did we overlook your favourite sushi restaurant? Send us an email and we'll pencil it in for a review! — josh@groovekorea.com