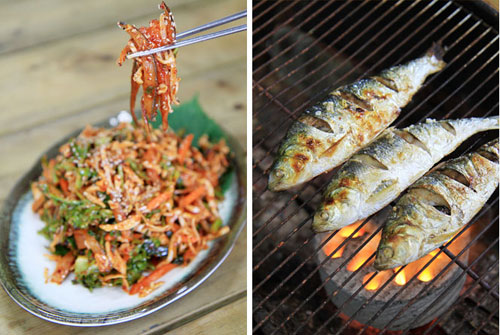 Top producers of sea-caught gizzard shad
Fall gizzard shads are caught in large quantities off the west coast and southern coasts. In the fall, gizzard shads are more popular than blue crabs and prawns due to their widely enjoyed flavors. The catch in 2013 has also been bountiful, so local and international tourists have been traveling in crowds to fish markets and beaches in areas where the fish is caught.

Top producers of pine mushroom
Pine mushrooms are primarily picked in mountainous areas in the Taebaek Mountain Range and Sobaek Mountain Range. Those thickest in size are considered the best, and are picked in the county of Yangyang-gun in Gangwon-do. Next are those picked in the counties of Uljin-gun, Bonghwa-gun, and Cheongdo-gun in Gyeongsangbuk-do. Other well-known pine mushroom-producing regions include Inje-gun in Gangwon-do, the cities of Andong-si and Yeongju-si in Gyeongsangbuk-do, and Danyang-gun in Chungcheongbuk-do. Pine mushrooms can be kept for an extended period of time after they are harvested. These pine mushroom-producing areas also have many restaurants specializing in pine mushroom dishes.