When the cold weather hits, many of us turn to comforting warm foods and drinks. In Korea, one our go-to favorites when the signs of winter appear is hot pot.

At Bu-heung Garden near Pyeongtaek City Hall, the specialty is dumplings which they also incorporate into their excellent bowl of hot pot soup. Owner Kim Seoung Geun opened this spot over 10 years ago after traveling the peninsula sampling different regional dumplings.

When I entered the restaurant, the lovely braised dumpling scent enveloped me like a warm hug on a cold autumn day. The restaurant itself wasn’t anything fancy, but if the food tastes as good as it smells, then nothing else matters!

My friend and I ordered a small mandu jeongol dumpling hot pot with seafood for 19,000 won (or $13.38) and we ordered fried dumplings stuffed with pork and chives on the side for 7,000 won. If you’re really hungry or have a bigger party, don’t worry because Bu-heung Garden also offers a medium and large-sized portion of their hot pot. For the two of us, the small-sized hot pot was enough. 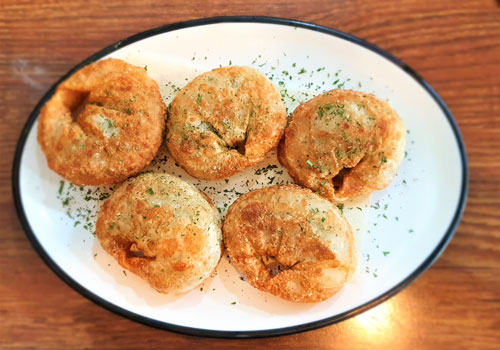 Our hot pot came with kimchi dumplings, savory meat dumplings, tofu, enoki mushrooms, vegetables, clams, shrimp and live abalone. During the winter season, this hot pot is topped with a small octopus instead of the abalone.

While waiting for our main dish, we dug into the fried dumplings made by Kim’s mother. We devoured these dumplings, which were perfectly crisp on the outside and soft on the inside with a perfect ratio of vinegar and soy sauce.

Soon, our hot pot arrived and I could smell the ocean. I first tried the broth which was clean and had a deeply rich flavor (Pro tip: If you run out of broth, remember that you can always ask for a refill). Next, I spooned one of the kimchi dumplings floating in hot pot. I bit into the soft dumpling and the well-fermented kimchi inside gave me a burst of flavor which did not overwhelm thanks to the subtle outer portion. The meat dumplings were also delicious and gave depth to the hot pot.

Though Bu-heung Garden is well-known for its dumplings, for me, the best part of the meal was the fried rice at the end of the meal. As we reached the end of our hot pot, our server offered us nalchial-bokkeumbap fried rice with flying fish roe for an additional 3,000 won per person.

To enjoy this side dish, remember to leave some veggies and broth in the pot. I added these to my fried rice for a delicious combination of soft rice, flavorful broth and the crunch of the roe— one last flavor explosion to end the meal right!

Other menu items at Bu-heung Garden include seafood kalgulsu jeongol, or dried Pollak dumpling soup, braised short ribs with seafood and a variety of dumplings with different fillings. They also have a kids menu featuring rice balls with flying fish roe and a giant pork cutlet.

Add this neighborhood spot to your list when you’re looking for a good place to warm up with a dumpling hot pot. Its casual setting and delicious food easily made Bu-heung Garden one you’ll want to visit multiple times as the winter weather ramps up.

Eat like a Korean local: Enjoy noodles and dumplings at Songjeongjip