As an alternative to a fancy restaurant that serves expensive beef ribs (galbi), you can easily find many Korean BBQ restaurants where you can get your meat fix at an affordable price. Due to the old economic recession, the Korean restaurant industry is full of BBQ chain stores that serve up inexpensive BBQ. 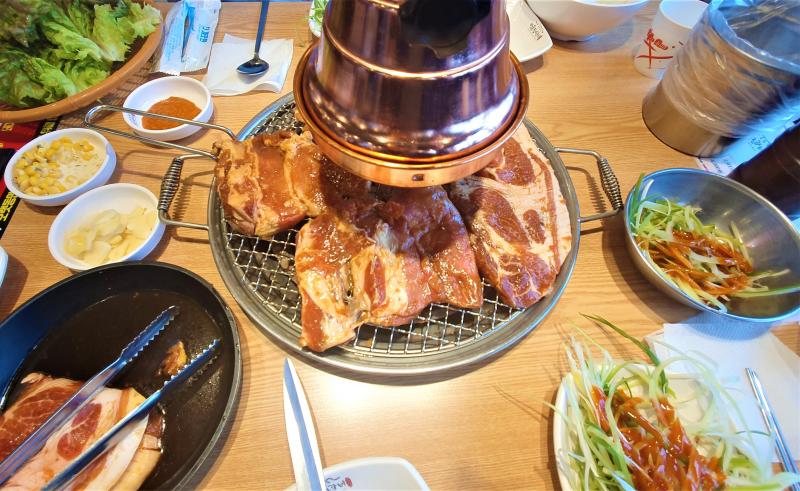 Myeongryun jinsa galbi is one of the chains that has recently attracted attention among the all-you-can-eat Korean BBQ joints. The restaurant, which first started in Seoul in 2017, now has 500 stores nationwide and is known for its seasoned pork ribs.

This all-you-can-eat restaurant has a time limit of two hours on weekdays and an hour and 40 minutes on weekends. My friend and I went on the weekend and didn’t know there was a time limit. But we had more than enough time to fill up our bellies.

Myeongnyun has a neat and general dining interior. Unfortunately, the narrow space between tables made it a bit boisterously. However, it didn’t bother me because I was busy devouring meat.

The flavor of the marinated pork was rather sweet. Children will definitely like it. Maybe that’s why most of the diners brought their kids. I also like meat marinated with sweet soy sauce, so I gobbled up five servings with my friend who came with me.

The method of ordering additional meat varies from chain to chain. In the case of the one in Sangyo-dong, you can grab the meat yourself from a refrigerator, while at others you need to ask the servers for mores. Each plate in the meat refrigerator had a note saying how many servings it was, which helped me from taking too much.

Another great thing about this restaurant is rice, soda, and side dishes are all free. They offer fresh vegetables such as lettuce, small green onions, garlic, and more. Welsh onions seasoned with vinegar, sugar and red pepper sauce really goes well with the greasy pork meat. I ordered soybean paste stew for an extra 2,000 won. Given that most restaurants charge 5,000-6,000 won for this stew, I was happy. In addition to soybean paste stew, they have spicy kimchi stew and soft steamed eggs that you can order for extra.

To round out my lunch, I ordered a cold noodle dish to wash down the oily texture that was still left on my mouth. As soon as the cold noodles were served on my table, I gulped down the icy cold bowl in a flash. I can’t imagine a Korean BBQ without cold noodles.

Although there is somewhat of a dispute on some websites over the quality of the meat served, it was not obviously cheap meat that is normally found at your average buffet. I was really satisfied with the restaurant’s juicy ribs, friendly service and irresistible prices.

It’s not a place for a special day, but one to head to fill your stomach with good food. If I have to choose one place to enjoy Korean BBQ that I can afford anytime, I’ll definitely to go this restaurant again. 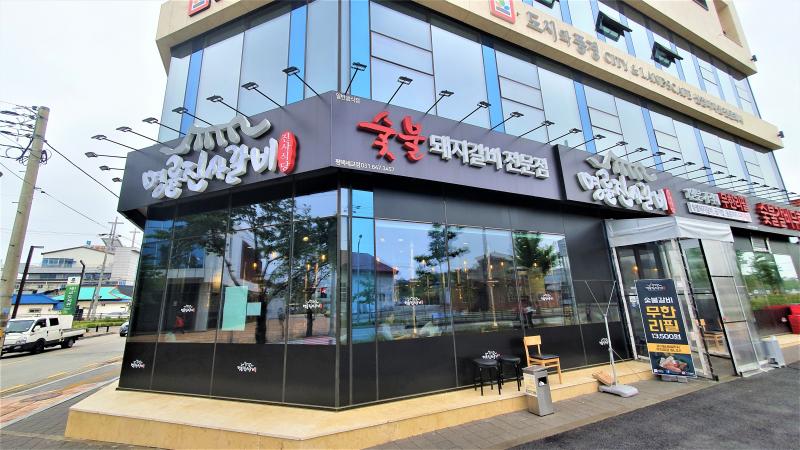 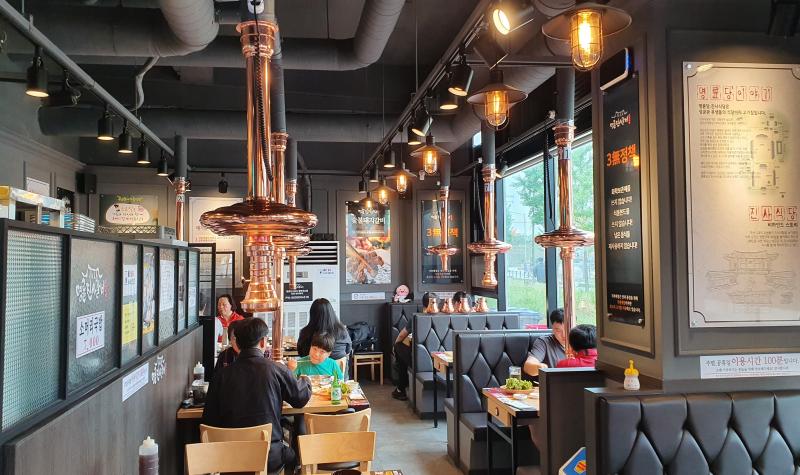 Shopping and more at Korea's Starfield Anseong Mall near Humphreys

A hidden burger joint in Korea near Camp Humphreys

Did someone say BBQ salmon?

A hidden burger joint in Korea near Camp Humphreys