VIDEO| Slurp up bulgogi udon at Murimmyeonga near Osan AB

VIDEO| Slurp up bulgogi udon at Murimmyeonga near Osan AB

A few months ago, I had my first taste of Hong Kong-style beef noodle soup at Starfield Mall in Anseong and have been hooked ever since. I’ve been on the hunt for a place nearby my home to save me gas money and ensure I could get my fix sooner. After weeks of searching, I found Moorimmyeonga(무림면가) just a short walk from Seojoeng-ri Station near Osan Air Base.

Though this joint serves up Japanese-style beef noodle soup, they use bulgogi in this fusion-style bowl with rich, savory broth made of dried horse mackerel, sea tangle, anchovy, bonito, and chicken.

To avoid crowds, my friend and I visited Moorimmyeonga on a weekday afternoon. Unlike normal Japanese ramen joints, this noodle shop's dining room is relatively big and has spacious distance between the tables. We both ordered bulgogi udon for 9,000 won each, a side of yubu chobap (fried tofu rice balls) for 3,000 won and a side of Subuta (or Japanese style sweet and sour pork) for 13,000 won.

While waiting for my noodles, I peeked into the open kitchen next to the tables. The chef with 10 years of cooking experience masterfully handled the medium-rare beef before transferring it to a grilling pot to hand-torch it. The cooking technique adds a smoky flavor to the beef. 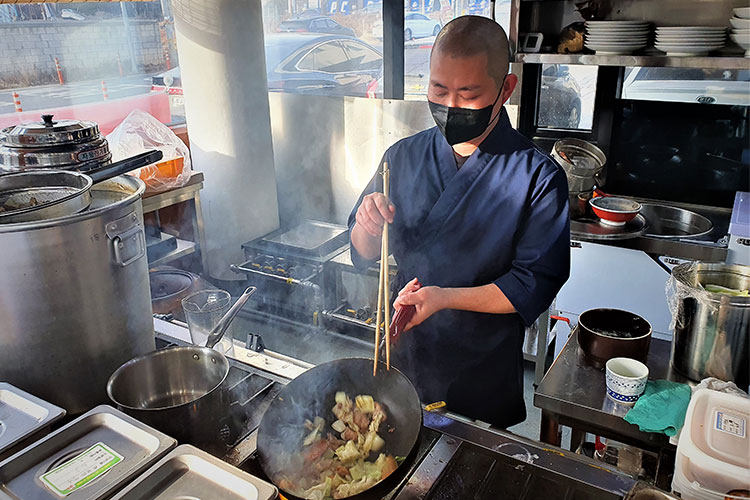 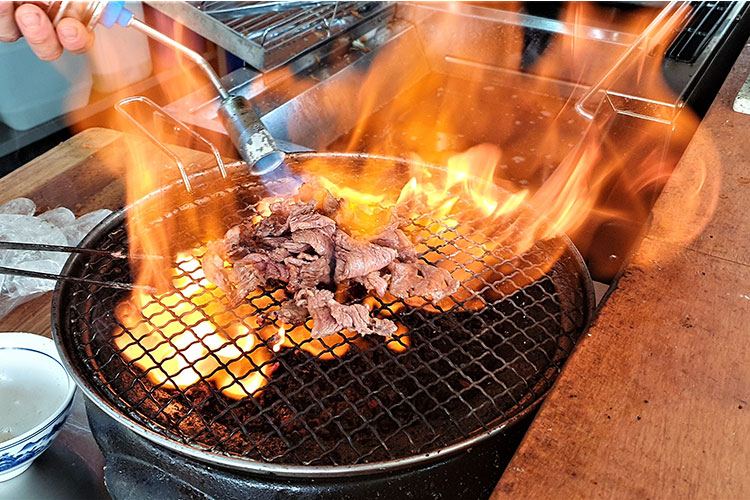 After this fire show, my beef noodle soup arrived quickly. The smoky scent of the bulgogi and the plump noodles looked like a harmonic treat ready to be devoured. I took my first spoonful and the chewy, handmade noodles had a firm bite. I loved the savory broth and the juicy bulgogi.

I added the yubu chobap to my soup and let it steep. The chobap will absorb the savory soup for a magical combination.

The chef’s skills were in every aspect of this delicious meal. But it was especially present in the noodles which are made with a recipe handed down three generations. If you’re lucky, you can catch the process of hand-pulled noodle making in the kitchen from the dining area. 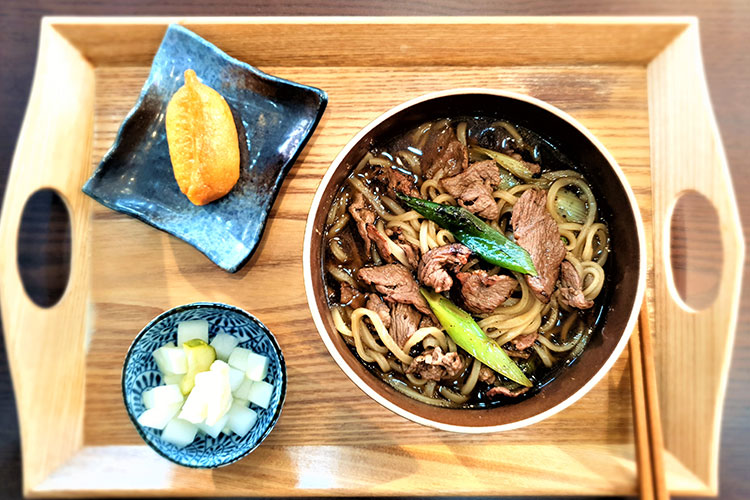 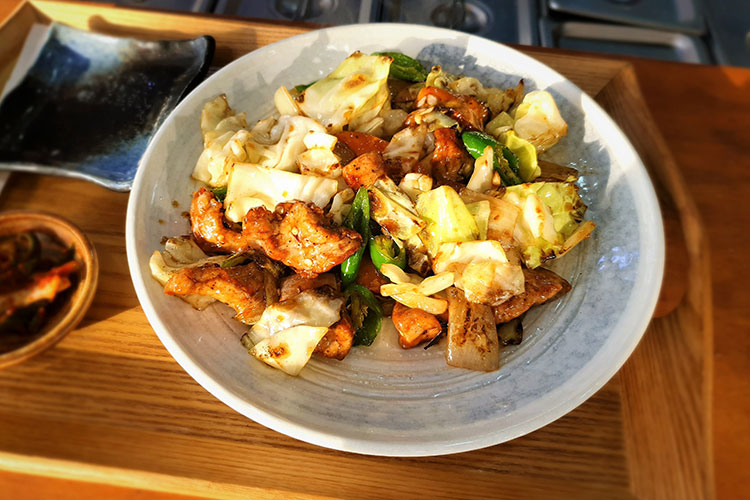 When I ate about half of the noodles, the sweet and sour pork we ordered arrived. To make subuta, pork tenderloin and veggies are sauteed in a wok with their secret sauce. Don't expect the typically crunchy-thick batter of the Korean-style sweet and sour pork (or tangsuyuk) from this shop. The texture of the pork dish was kind of soft and was coated in sauce. It was more on the savory side rather than sweet and sour. It was delicious and made me want to have some soju or sake, but it was 3 p.m. on a weekday afternoon, so we didn’t partake.

Apart from the bulgogi udon, Moorimmyeonga’s fried pork loin cutlet, is also particularly popular among the restaurant’s many fans. Another plus is the 1TALENT café inside the dining area serves up a strong Americano for just 1,000 won.

If you're living in Pyeongtaek or around its neighboring town and feel like eating some good and proper noodles, Moorimmyeonga certainly is the right place to go! 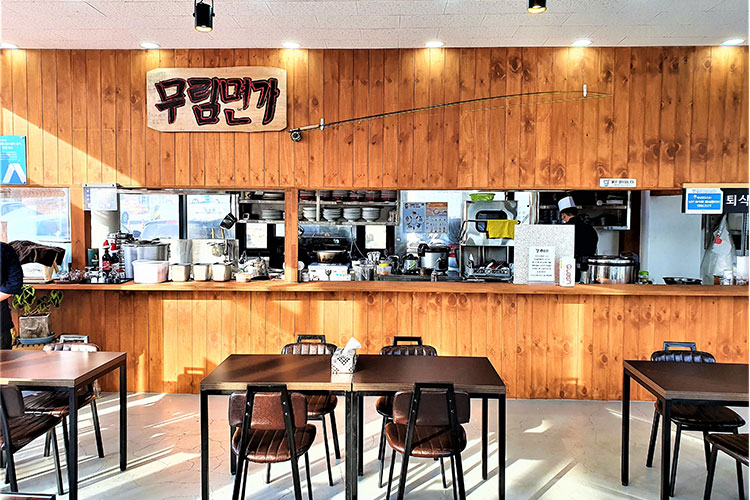 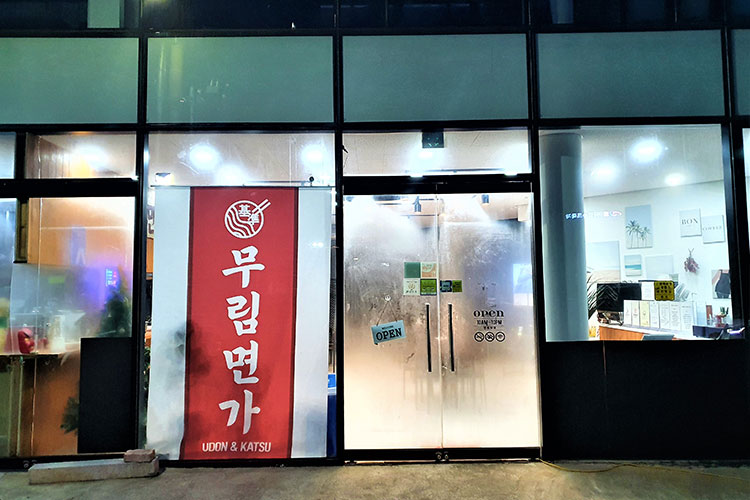 Warm up with noodles at Ramen Gwanghoon near Osan AB

Warm up with noodles at Ramen Gwanghoon near Osan AB