The sacrifices of Gen. Van Fleet and his son

The sacrifices of Gen. Van Fleet and his son

In the late evening of April 4, 1952, news was delivered to U.S. Army Gen. James Alward Van Fleet, commander of the U.S. Eighth Army and United Nations forces in Korea, that his only son, U.S. Air Force Capt. James Alward Van Fleet Jr., went missing with his crew during a B-26 bombing mission in Korea. Gen. Van Fleet called off the official search for his son and crew because he felt it could cost more lives to save his son behind enemy lines. Capt. Van Fleet Jr. was officially put on the MIA/KIA list on April 5, 1952.

Before the fatal bombing mission, Capt. Van Fleet Jr. held a Korean-style 60th birthday party for his father on March 19, 1952. The black and white photos taken during the party are the last pictures of the two together.

Gen. Van Fleet’s only son did not have to participate in the Korean War, but the bomber pilot volunteered to help in the war effort. A letter written to his mother during the war still inspires many people today. “Dear Mom, I hope this letter will not be wet with your tears. My father is fighting for the rights of human beings to live without fear. It is only natural that I have joined him in this fight,” Capt. Van Fleet wrote. “Please pray not for me, but for my crew in the B-26 bomber. They have young wives or girlfriends anxiously waiting for their safe return.”

Many don’t remember, but like Capt. Van Fleet Jr., a total of 142 soldiers whose fathers were active generals participated in the Korean War. Thirty-five were killed or injured during the war. The son of Gen. Walton Harris Walker, another hero of the Korean War, and the son of U.S. President Eisenhower also served in the Korean War.

Even after his son’s death, Gen. Van Fleet devoted himself to the reconstruction of the Korean Armed Forces. After being discharged from the military service, he also made such a great achievement for the true friendship between Korea and the United States. In 1957, Van Fleet helped establish in New York, The Korea Society, a nonprofit organization dedicated to promoting friendly relations between U.S. and Korea “through mutual understanding and appreciation of their respective cultures, aims, ideals, arts, sciences and industries.”

In a speech to the U.S. Congress, the Republic of Korea’s first president, Syngman Rhee, praised the general, saying, “General Van Fleet is the father of the Korean military.” Van Fleet’s expression “Let’s go together” is still today used as a symbol of friendship between U.S. and Korean forces.

The  Republic of Korea remains the only country in the world to be in a state of truce, and many U.S. military members are dedicated to maintaining peace on the penninsula.

Although the Korean government has been engaged in various activities over the years to grow the friendship with the U.S. military, there have been not many opportunities to properly express gratitude for the U.S. military’s dedication at the private level.

Along with some volunteers, the Korean Health News and U-MEDI are trying to remember the sacrifices of General Van Fleet and his son, as well as others who have served unselfishly and devoted their live to better the world they lived. We believe discovering and sharing heroic stories of U.S. soldiers in Korea will promote closer friendship between the U.S. and South Korea.

Korean Health News and U-MEDI plan to continue to remember our heroes, with hopes of creating a website that chronicles their legacy. 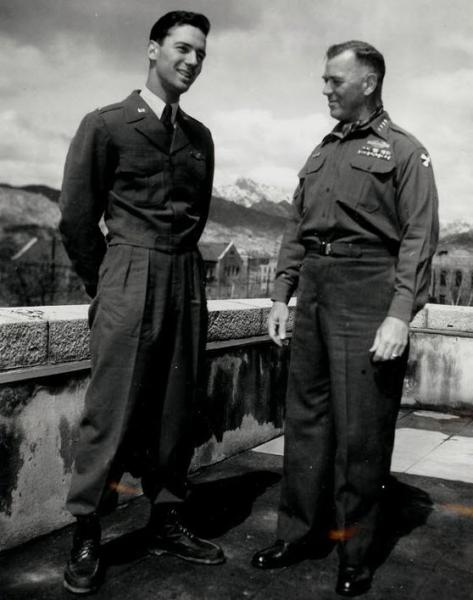 Suicide prevention resources that can help