Hannah McCormick (second from the right) Photos by Jaime Waterbury

Hannah McCormick grew up in the great state of Wyoming. Right out of high school, Hannah joined the Navy as an inflight technician, where she managed communications for nuclear deterrence. After serving five years, Hannah began working for an eye surgeon in Oklahoma, where she met her now husband, Josh.

Unfortunately, Hannah’s father got sick. While visiting him so often in the hospital, she began to grow an interest in the nutrition field. Knowing her father would disapprove of this choice, she expanded her education and decided to go to culinary school. She completed an associate’s degree in culinary arts and is currently working on a master’s degree in nutrition. 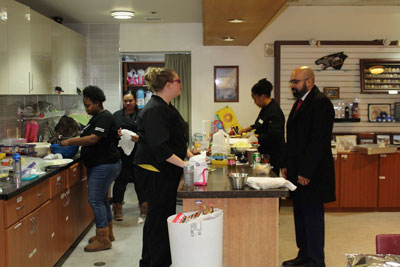 Happily, Hannah was offered to be an action cook at the children’s hospital! She was able to work on special projects for terminally ill children. Baking theme cakes and other meals requested by the children. Here, Hannah had a lot of freedom to cook and bake what ever she wanted. She then began to pursue a job in molecular gastronomy. She was able to study under some amazing and talented chefs. This was more of a challenge for her. But it pushed her to become better!

Later, Josh, was stationed here, at Osan Air Base in South Korea and Hannah followed. At first it was hard for her to find a place that she could really fit in. One day, Hannah stumbled upon the Osan Red Cross decided she wanted to help the community and began volunteering as a CPR instructor. Soon after joining, she found her place as the Hospital Volunteer Manager. She also was offered the opportunity to cater for the Asia Pacific Division Conference held her at Osan. Hannah says, “Everything is easier on a full belly”.

Getting to cook for high ranking military members has really helped her to know what it takes to impress and satisfy important people and to understand what it takes to tackle a big conference like the Asia Pacific Division conference. Overseeing the food for this conference was an amazing privilege and given the responsibility of feeding all of them members attending the conference, healthy solid, energetic foods and putting people’s minds at ease was a great task, but hard work pays off!

Hannah was personally recognized by National Head Quarter level staff, Koby Langley, Sr Vice President to Service to the Armed Forces, and Harvey Johnson, President of Service to the Armed Forces for her excellence and determination. Hannah was handed one of the most important and difficult roles for the conference and she handled it miraculously.

51st Medical Group Change of Command at Osan Air Base

Too scared of jumping out of an airplane? There is indoor skydiving in Korea!

Sisters in Arms on the Korean Peninsula