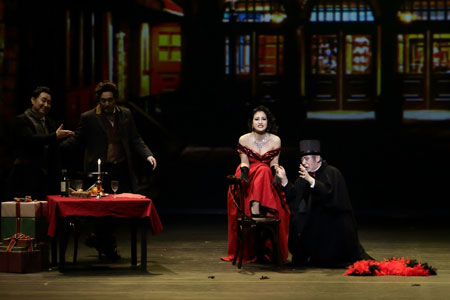 Synopsis
Around 1830, in Paris, France, there are four Bohemians, the poet Rodolfo, the painter Marcello, the musician Schaunard, and the philosopher Colline in an old attic. They are poor, but happy. On the night of Christmas Eve, they all intend to go to a bar, but Rodolfo has not finished writing his poem yet. Rodolfo promises to join them soon, and the others leave. A neighbor, Mimi, knocks on Rodolfo’s door, and she asks him to light her candle for her. But, Rodolfo’s candle goes out, too. At the moment, Mimi accidentally drops her key. When the two search for it in the dark, they touch each other’s hand. They fall in love then. At the Cafe Momus, Rodolfo introduces Mimi to his friends. And, Musetta who has been Marcello’s lover arrives. Six members enjoy thier Christmas Eve. The next year, Mimi visits Marcello. Mimi consults him about Rodolfo who is recently cold to her. Then, Rodolfo visits Marcello. Mimi hides at once. Rodolfo says to Marcello that he loves Mimi, but he is so poor that can’t buy any medicine for her who has tuberculosis. Then, Rodolfo notices Mimi. They love each other, but they decide to choose to live separately. After some time, Musetta runs into bohemian’s room with the dying Mimi who really wants to die at Rodolfo’s side. His friends go out to come up with the money to buy medicine for her. But when their friends come back, Mimi takes her last breath. Rodolfo shouts Mimi’s name, and breaks down crying. 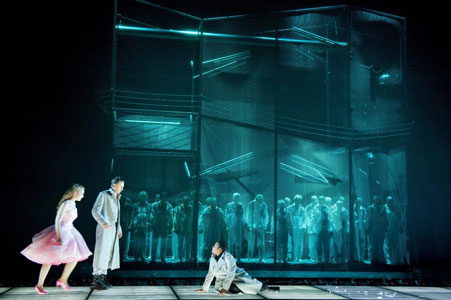 Synopsis
In the 16th century, in Seville, Spain, the governor of the prison, Don Pizarro, puts Florestan, who is a politician, attempted to expose Pizarro’s injustice into prison on a false charge. Florestan’s wife, Leonore, tries to rescue him. She uses the male name, “Fidelio,” and dresses in men’s clothes. And, she works as an errand boy of the jailer, Rocco. She works faithfully for two years, so she gains Rocco’s confidence. Then, Pizarro heard that the Minister of Justice, Don Fernando, will come to the prison in order to inspect injustice of the prison. Pizarro decides to kill Florestan in secret. Pizarro orders the jailer, Rocco, to dig a grave, so Rocco orders Fidelio to help him. Fidelio has watched for an opportunity to rescue Florestan, and she only now notices that the physically and emotionally worn out man in the dungeon is her husband. Pizarro appears in the dungeon. When he attempts to stab Florestan to death with a sword, Fidelio interrupts him. She discloses her true character, she is Florestan’s wife. Then, the Minister of Justice, Don Fernando, arrives at the prison. He is pleased to meet his sworn friend, Florestan, again. He had thought that Florestan died. Pizarro is arrested by the Minister. The Minister blesses Leonore and Florestan with love and justice. 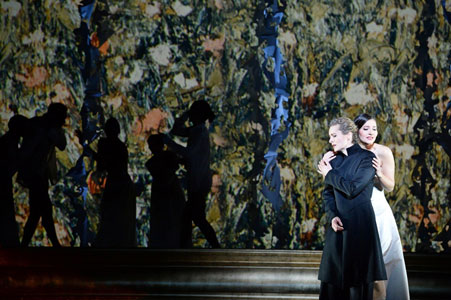 Synopsis
In the mythological age, Orfeo grieves before the grave of his dear wife, Euridice, in the forest. Orfeo appeals to the Gods for her to come alive again. Then, the god of love, Amor, appears and tells him that the god of almighty, Jupiter, sympathizes with him and admits him to go to Hades, the god of death. In addition, she also says to Orfeo, “You must not look at her before you arrive in this world.” In front of the gate of Hades, Orfeo is surrounded by the spirits of many dead people. When Orfeo plays the harp and expresses his sorrow, the spirits of many dead people make way for him. In Hades, Orfeo waits for his wife in the beautiful sky and the brilliant sunshine. Euridice appears there. Orfeo leads her by the hand back to earth. On the way back to earth, Euridice worries about losing Orfeo’s affection, because he doesn’t look at her. Euridice sits down on a rock, and she appeals to him to remember his love for her. Orfeo can’t deny her request. When he looks back at her, she dies once more. Orfeo regrets it, and he tries to die. Then, Amor appears again and tells him that he has endured a lot. Amor gives Euridice her life as an exception. Orfeo and Euridice are pleased, and they give thanks to the Gods. 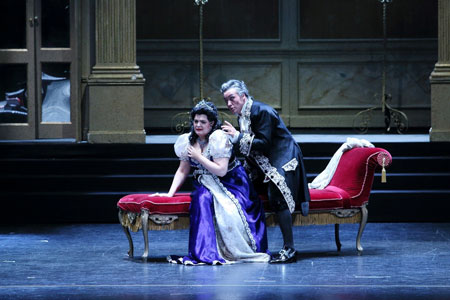 Synopsis
On 17th June, 1800, Rome is ruled by fear, that is, republicanism collapses, and shifts to royalism. One of the republicans, Angelotti, succeeds in breaking out of prison, rushes into the church and meets up with Cavaradossi, his friend. Cavaradossi harbors Angelotti in his secret hideout. After the two left the church, Scarpia who gives chase to Angelotti enters the church. Scarpia meets Tosca, who is the singer and Cavaradossi’s lover there. Scarpia tricks Tosca into going to Cavaradossi’s house, and he arrested Cavaradossi. Scarpia tortures Cavaradossi, but he doesn’t confess Angelotti’s whereabouts. Scarpia calls Tosca, and shows her her lover’s tortured state. Tosca gives up the route to the secret hideout to Scarpia. Then, word comes that Napoleon has won the Battle of Marengo, that is, a defeat for royalism. Cavaradossi exclaims with delight. Scarpia is furious with him, and condemns Cavaradossi to death. Tosca begs Scarpia to save her lover's life. Scarpia demands that Tosca yield herself to him in exchange for her lover's life. As Scarpia goes to touch Tosca, she stabs him to death with a knife from the table. Tosca runs to Cavaradossi who is confined to the prison at the castle of Sant'Angelo. But, the firing squad carry out their orders to shoot Cavaradossi. When Scarpia’s subordinates rush to arrest Tosca for Scarpia's murder, she kills herself by leaping from the castle. 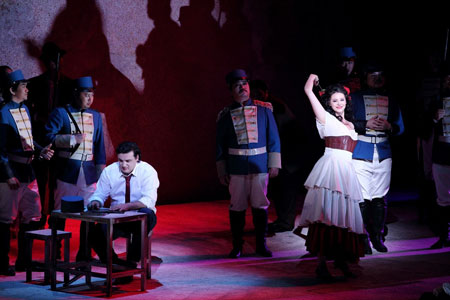 Synopsis
Around 1820, in Seville, Spain, the most provocative gypsy, Carmen, is of all the girls at a place near a cigarette factory. There are a lot of men and women. She sings ‘Habanera’ and fascinates the young soldier Don Jose, isn’t interested in her. After that, Carmen arrested because of a quarrel. However Carmen seduces the guard, Jose, and runs away. A month later, Jose who was imprisoned for letting Carmen slip away, has just been released, and he goes to meet her at a tavern. With that flower in his hand, He tells her his feelings. Jose decides to stay with Carmen and her group members, are smugglers. Jose later regrets his choice. Carmen is already in love another man, Escamillo who is a bullfighter. Then, Jose’s childhood friend, Micaela, visits him. She informs him that his mother is seriously ill. Jose decides to go home. The following month, at the square in front of the bullfight arena, Escamillo who is Carmen’s lover, is welcomed by spectators. He enters the arena. Carmen remains at the square, then, Jose appears. He demands she leave with him, but she refuses to. In rejection to his persistence, Carmen throws away the ring that Jose once gave her. Jose stabs her to death with a dagger, and he is then dumbfounded by his actions.

Festivals around Korea in May