Art and culture collide in these six complexes that were once garbage incinerators, coal mines, and more. After becoming dilapidated and unused, these crazy cool sites were renewed and regenerated to become spaces for community events and artistic appreciation. From bunkers that once housed war tanks to paper factories, sites around Korea are receiving new life and you need to see them in person to believe what they look like today. 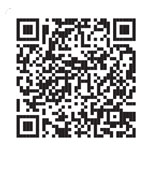 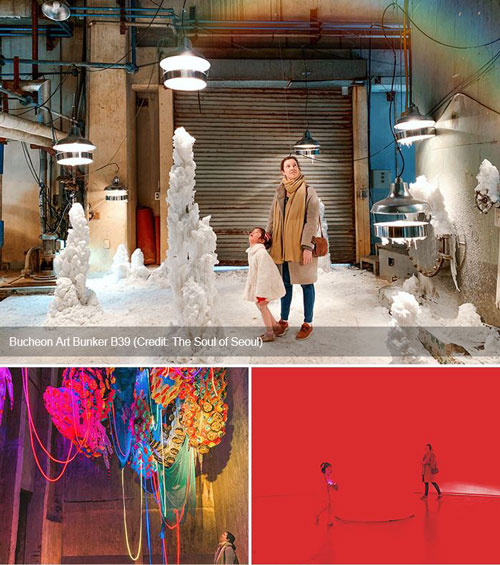 Bucheon Art Bunker B39 (부천아트벙커 B39) just opened in 2018 and was formerly an old garbage incinerator plant that began operations in 1995. After operating for 15 years, the government shut down the plant in 2010 and the Ministry of Culture, Sports, and Tourism together with Bucheon City created a fund to renovate the dilapidated space. Today, it is a multidisciplinary culture and arts space that acts as a community space for local citizens and features some amazing artistic exhibits. The designer, Kim Kwang Soo, sought to preserve the incineration spaces while also adding an opportunity for artistic education so areas like the 39 meter Bunker, Ash Bunker, Induced Draft Fan Room, and Main Control Room were all left intact. Visitors can walk through the numerous rooms and spaces at their leisure and then stop into a cool café and restaurant on the first floor before departing.

Bucheon Art Bunker B39
Address: 53, Samjak-ro, Bucheon-si, Gyeonggi-do (경기도 부천시 삼작로 53 부천아트벙커B39)
Directions: Head to Sangdong Station on Seoul Subway Line 7 and take exit 7. Directly out of the exit is a bus stop. Catch Bus No. 50-1 and travel for 12 minutes and get off at the eleventh stop “Samjung Intersection (13025).” Walk straight in the same direction the bus was headed and turn right on the second major street. You’ll find the art center on the left side of the street.
Operating hours: Tuesday – Sunday 11:00 – 18:00
Admission: Free
Inquiries: +82-32-321-3901 (Korean only)
Website: b39.space 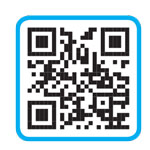 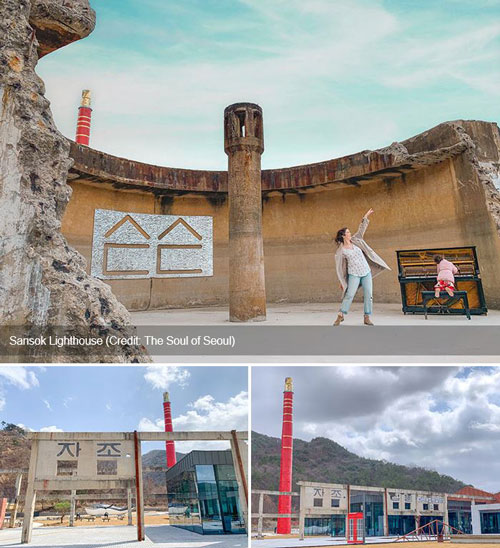 Sansok Lighthouse (산속등대) sits in Wanju-gun just outside of the more popular city of Jeonju in Jeollabuk-do. This collection of buildings was previously used as a paper manufacturing site that was eventually neglected for 40 years until it was re-opened in 2019 as a community and arts space. There are outdoor exhibitions including a 33 meter long whale that visitors can climb inside. The neglected wastewater treatment facility is now an outdoor amphitheater and the central feature of the complex is a tall red lighthouse. Another fun aspect of this complex are the randomly placed public telephone booths from the ‘80s that are now like mini karaoke booths. Step inside and sing for all to hear. Yes, everyone in the area will be able to hear your artistic rendition. There is a café, gallery, and an immersive learning space for children too. 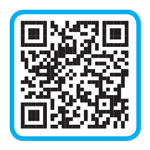 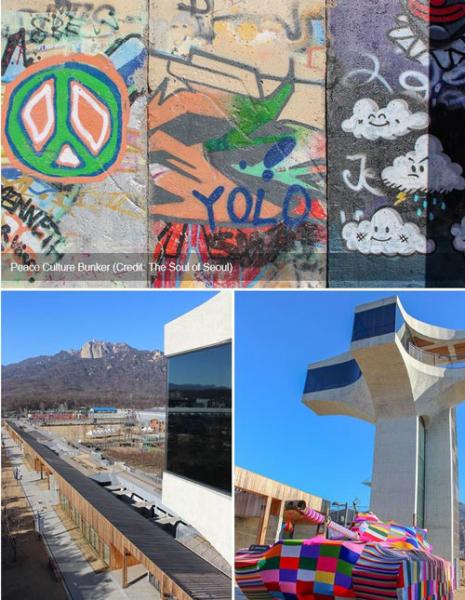 The Peace Culture Bunker (평화문화진지) was originally constructed between 1968 and 1970 in a strategically important area north of Seoul. The structure which looked like any normal apartment complex actually concealed tanks in the ground floor. The apartment houses were gradually destroyed over time and were removed all together in 2004, and in 2009 it was determined the bunker should become a communal space in keeping with the public park that was built beside it. There are now five industrial units that use concrete, steel, and timber beams to create spaces for workshops and local events. There is also an observatory at one end to overlook the entire structure and the mountains beyond. It’s an interesting regeneration project that has taken a building meant for war and made it for peace. 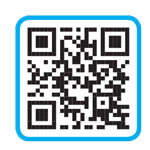 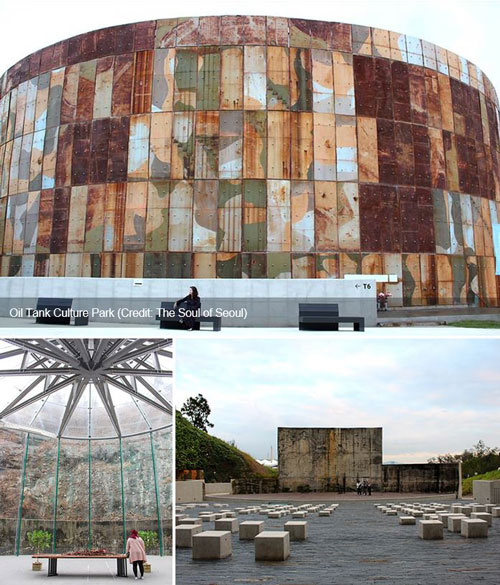 The Oil Tank Culture Park (문화비축기지) sits across from the popular World Cup Park and stadium in Mapo-gu, Seoul. The site is for any urban renewal fan and features the former Mapo Oil Depot which housed petroleum from 1976 until 2000 in six tanks that could hold a total of 69.07 million liters of oil. Today, each tank has been opened up and features a different interesting site for visitors. Industrial façades surround the “Culture Yard” where events and exhibitions are held. Inside of the massive tanks, one can find a museum that details the history of the site, an echo space, a Culture Complex, a café, a “Glass Pavilion” which visitors will recognize from the drama “A Korean Odyssey (2017),” a community center, and an outdoor amphitheater. The entire site has been designed to maximize energy in an efficient manner and uses geothermal energy for cooling and heating and also has a 30 ton water processing facility in the basement to purify water from the restrooms and rainwater. It’s urban renewal at its eco-friendliest.

Oil Tank Culture Park
Address: 661, Seongsan-dong Mapo-gu, Seoul, Korea (서울특별시 마포구 성산동 661)
Directions: Head to World Cup Stadium Subway Station and go out of either exit 2 or 3. You’ll see the massive stadium when you go up the escalators. Stay to the north side of the stadium and walk around the west side where you’ll see a basketball court. Keep walking to the road just beyond it and the cross walk which will take you right to the Oil Tank Culture Park.
Operating Hours - Park: Open 24 hours a day
- Buildings: Tuesday – Sunday 10:00 – 18:00
Admission: Free
Inquiries: +82-2-376-8737
Website: parks.seoul.go.kr/culturetank 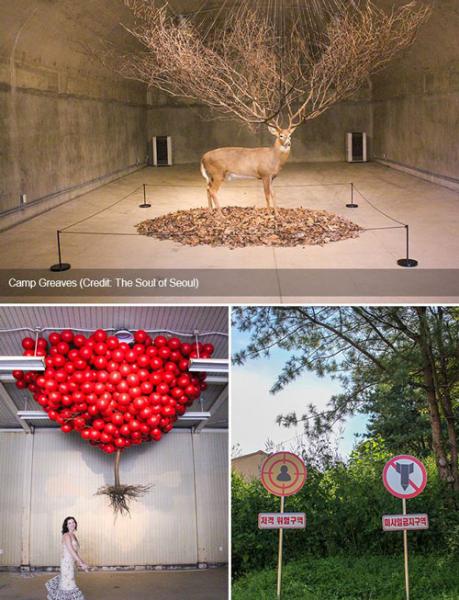 Formerly an American military base for the 506th US Second Infantry Division that was used for fifty years in the DMZ, Camp Greaves (캠프 그리브스) has been converted into an arts and culture complex to promote peace and educate visitors on the Korean War. It’s unique in that it sits in the Paju Civilian Control Zone just two kilometers from the DMZ South Limit Line. The base contains various American style structures from the 1950’s to the 1990’s and inside are artistic installations with the theme of promoting peace. Visiting is like entering a time capsule and visitors that watched the drama “Descendants of the Sun (2016)” will immediately recognize the surroundings. Today, there is even a hostel on the grounds where visitors can stay the night.

Camp Greaves
Address: 137, Jeoksibja-ro, Paju-si, Gyeonggi-do (경기 파주시 군내면 적십자로 137)
Directions: You cannot enter the Paju Civilian Control Zone on your own but must go with a tour that departs from the Imjingak Resort Area. Passports/ARCs are required for entrance.
Operating Hours: Check for updated programs as the DMZ area is subject to change often depending on the political climate among other things.
Admission: Tours are free but there are longer multi-day tours available that range from 12,000 – 30,000 won
Inquiries: +82-31-953-6970
Website: dmzcamp131.or.kr 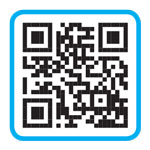 The Samtan Art Mine (삼탄아트마인) is another arts and culture complex but built on the site of the abandoned Samcheok Mine that was run for 38 years from 1964. At one time there were 3,000 people working on the site but as demand for coal waned, so did the work. The site features industrial remnants and machines from the past mixed with artistic works from artists today. There is a collection of art works, ceramics, and sculptures from 150 countries on site and they are displayed at different times throughout the year. This is another filming location that visitors will recognize from the earthquake episodes in “Descendants of the Sun (2016)” and from the drama “My Absolute Boyfriend (2019).”

Samtan Art Mine
Address: 1445-44, Hambaeksan-ro, Jeongseon-gun, Gangwon-do
Directions: From Dong Seoul Bus Terminal, take an intercity bus bound for Gohan/Sabuk Intercity Bus Terminal. Transfer to a Nongeochon Bus bound for Sanggallae and Manhang and get off at Motgol Bus Stop. (8 bus stop away) Samtan Art Mine will be located on the right-handed road in the back side for about 466 m.
Operating hours: Tuesday – Sunday 09:00 – 18:00
Admission: 10,000 – 15,000 won
Inquiries: +82-33-591-3001
Website:  samtanartmine.com 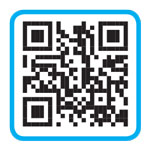 7 best parks for a spring picnic in Korea

Pedal your way through Korea's nature on Railbikes!