During scorching hot summer days, it’s difficult to resist the temptation to crank the A/C or plant yourself in front of the nearest fan. Luckily, there is another, more energy-efficient way to keep cool this summer.

Gwangmyeong Cave, on the far southwestern outskirts of Seoul, a man-made cave dating back to Japanese colonial rule, is one of those spots for a little cooling down and a Korean history lesson. Built in 1912, the cave holds traces of the country’s colonial exploitation and subsequent history post-liberation.

Up until 1931, weapons were produced during World War II with minerals from the cave like gold, silver, and iron. Later, during the Korean War, it was used as a shelter for refugees. Mining operations were stopped in 1972 due to flooding, which led to the cave becoming a storage area for salted shrimp for nearly 40 years. In 2011, the cave was opened to the public as a cultural attraction.

Unlike natural caverns that have limited lighting, Gwangmyeong cave, an artificial cave that spans 7.8 kilometers in length and 275 meters in depth, is divided into some 20 sections, each decorated with colorful lights.

In July, when temperatures in Korea soared well above the 80-degree Fahrenheit mark, I fled to Gwaygmyeong. The so-called “natural refrigerator” is a little over an hour drive from Pyeongtaek.

The workspace where miners used to sort minerals was visible from the steep stairs leading up to the cave, a clear reminder of its storied past. The chilly air came over me when I reached the entrance of the cave. At first, it was really freezing cold!

“Because of the temperature difference, the wind continues to come out from the inside,” one guide wearing thick coat explained.

“The cave is not affected by the sun or radiation, so it stays between 12 to 13 degrees Celsius throughout the year. It’s cool in summer and warm in winter,” he added.

The sweat I had shed and heat I felt as I’d climbed the steep stairs to the cave entrance quickly diminished and pretty soon I was chilly. Luckily, I had brought a long-sleeve shirt with me, but I was surprised that I was wearing it considering how hot it was outside. 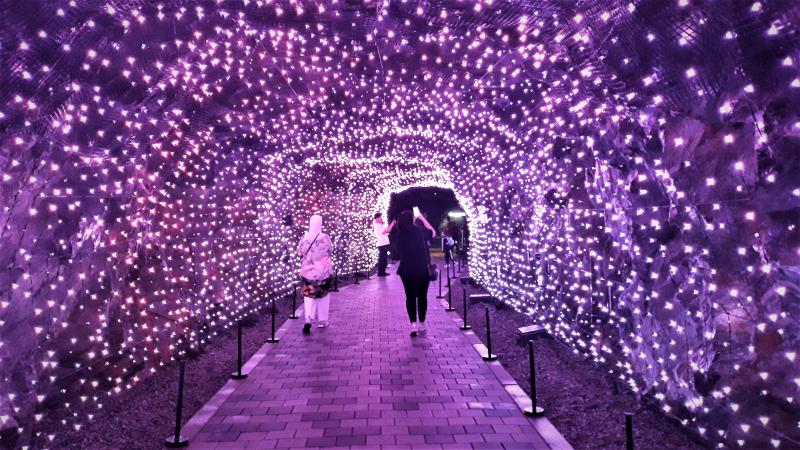 Though Gwangmyeong Cave had no stalactites or stalagmites to look at, there was plenty to enjoy inside this cold sanctuary.
We entered the “Light Space,” an area connected to Wormhole Square, the starting point of the cave. Thousands of colorful illuminations decorate the walls of this Instagram-able space, making it too beautiful to pass without a couple of snaps. Another section, the Cave Art Center, is a concert hall, minus a stage. This is because the walls of the cave become the stage with a fantastic laser show projecting all around.

I entered the “Lord of the Rings”-themed room, another great place for cool pics, and saw the giant dragon created by the Weta Workshop team that produced the actual film.

Stop at the Miner’s Spring for a refreshing break over a glass of first-class spring water once used to quench miners’ thirst on their tough shifts.

Other sections include the Cave Aqua World, for a look at some of Koreas native fish and a modern history section dedicated to laborers of the Japanese colonial period. Here, you can also see the displays of the refugees that hid here during the Korean War.
The area used to store salted shrimp is now a sophisticated wine warehouse, as the low temperature and high humidity are optimal conditions for wine aging.

This area holds over 230 kinds of wine produced from 43 wineries across South Korea. If you have a designated driver, sample the wines in the tasting room before purchasing.

Experts estimate that the cave still contains a sizable deposit of gold. You might not discover any gold, but you will have a refreshing time in a chill cave with many great activities to keep you out of this unbearable summer heat!

Within walking distance of je-i-juchajang, the cave’s second parking lot, the Upcycle Art Center features beautiful exhibits made literally made from trash. The gallery was previously a public information hall, but three years ago it was transformed into an exhibit area to display creative sculptures submitted for a local contest. Every year, they change the exhibits with the art submitted to the annual contest.

But before you even get to the gallery, you can check out all the strange sculptures surrounding the building. Some are of animals and others, well, you can decide what they are.

On the second floor of the gallery, there is a restaurant. For my take, the size and the quality of food served at the restaurant does not justify the prices.

Near the cave entrance’s ticket booth, visitors will find four or five food trucks selling a variety of Korean favorites. Grab some SeoSeo steak, a juicy flat iron steak with a side of baked onions, green beans and wasabi for a decent price (9,900 won or about $8.30). Or try So-tteok so-tteok, a tourist favorite of skewered rice cake and sausage and brushed with two different sauces (4,000 won). The chewy texture of the tteok worked brilliantly with the sausage and the sauce I chose. It was delicious! Another skewer you’ll want to try is the grilled shrimp (6,000 won), which is glazed with tons of butter. Grab this skewer if you are a seafood lover and check out the offerings all the trucks have to offer.

Whenever I find myself in a new place, I make a stop at a traditional market a must. I like to see what the area’s specialty is, which in itself makes me feel like I’m on a treasure hunt. Although the Gwangmyeong Traditional Market is not as big as some of other traditional markets I’ve been to, this one had its own gems around every corner. The healthy Chlorella Hamburger (2,000 won), with its unique flavor, is the most iconic food in the market. Served on a moist and chewy bun made of tofu and glutinous rice, the burger was topped with chopped cabbage, ketchup, sliced cucumbers, pickles, and lettuce. It was delightful.

Not full from my burger, I grabbed some grilled short rib patties (1,000 won each). Jang-leung-wang-tteog-gal-bi, a spot which boasts 20 years in business, serves up greasy patties made of ground pork mixed with vegetables and fruit. It wasn’t that great, but it was edible considering its price. The market also sells cheap grilled chicken wings (5,000 won for 7 pieces) and drum sticks (1,000 won each).