Angle Magazine and Busan Indiens have combined to create the largest Big Day South to date, with stages in the Gwangan, KSU, and PNU areas. The festival continues to expand, with the first international performer joining this year, making a thrilling celebration of the creative scenes beyond the capital.

Tickets are available for purchase at anglemagazine.co.kr. Full day passes are 25,000 won in advance, or 30,000 won at the door and single entry tickets to each stage are 15,000 won. All Friday and Sunday performances are free.

The action kicks off with an outdoor stage at Gwangan Beach featuring the punk sounds of Smoking Goose and Gukryeol alongside the swinging brass of Wink Child Tappers and Bust Orchestra with live painting by Gyeongju artist Narae, and Ulsan artist Red Eyes adding visual work. The first night ends with an opening party at HQ bar, with Daegu band Hon’z joining Banana Monkey Spanner, and hip hop acts Masstige and Kritik 24 7 from 9:30 pm.

This is also the first time Big Day South has invited an international performer with avant-garde, experimental folk project Bye Bye Fish traveling from Beijing. The project was formed by founding members of Beijing’s beloved punk outfit, SUBS, and is a fusion of dark extremes, electronics, experiment, and nursery rhyme.

Roots Redeem will blend their traditional instruments and electronic beats with the hypnotic performance art of Hong Seungyi, who was a stand-out performer at the 2016 festival in Gwangju. The festival also welcomes back past performers Park Jihyoung, Cindi L’Abbe, and Ruth Minnikin – who will collaborate with Busan artist Kim Kyungdeok — while new face Amy Rose brings her unique form of storytelling and spoken word.

Busan-based artist Michael Melson has been commissioned to create a unique digital exhibition for this year’s festival. Nine images will be hosted online, with QR code posters scattered around the KSU area on Saturday afternoon from 1 pm – 4 pm. Guests can scan the QR code to find the image, save to their phones, and bring all nine images to Node to receive a free commemorative poster from Mini Print. The first 10 people to share the collection on Instagram using the #bigdaysouth hashtag will also be invited to a secret show in Busan at a later date.

Liquid Arts, a local poetry and performance group run by long-time Busan resident Kenneth May, will host a Wordz Only stage at Ol’ 55 from 4 until 6 pm on Saturday. Entrance for this stage is free and will feature a collection of poets and story-tellers from around the south.

This year’s main music stages will take place across three venues on Saturday, with acts performing between Ovantgarde and Club Realize from 4 pm, before returning to Node for the headline performers. Alongside much-loved local acts such as Bosudong Cooler, Platform Stereo, The Vastards, and Soumbalgwang, you can catch Pakk, Airy, M.B. Jones, and 57.

The headline stage at Node opens from 8:30 pm, and will bring a triumphant homecoming performance for Say Sue Me, who will be just back from their UK and Ireland tour, organized by their UK label Damnably. The band has had a blistering few years of new music, international tours, and glowing reviews from critics around the world, and it’s remarkable to see how far they’ve come since they performed at the first Big Day South in Daegu in 2014.

They’re joined by another much-traveled act, Tengger, who release new album Spiritual 2 on Brooklyn-based label Beyond Beyond is Beyond. Busan skate punk legends Sidecar and the new synth kids on the scene, 88, will make up the rest of the stage.

Sunday performances start from 4 pm, to allow for plenty of recovery from Saturday’s exertions. There will be a mixture of performance art, acoustic music, and industry seminars at Cafe Merge in PNU with current darlings of the music scene Wussami being joined by the iconic musical stylings of Danpyunsun. Ulsan’s Kim Yi-hwa will perform a solo piece a day after returning from her exhibition in Australia, while Busan Open Performance Project will showcase the results of a series of performance workshops arranged by Cindi L’Abbe. The closing party will start at Basement from 8 pm, with DJs and hip hop acts keeping everything moving until late.

Big Day South provides a space for community, collaboration, and appreciation. There’s a truly wonderful line up of artists and performers this year, and audience engagement remains as important as ever with a number of opportunities for the audience to interact and create as part of the festivities. 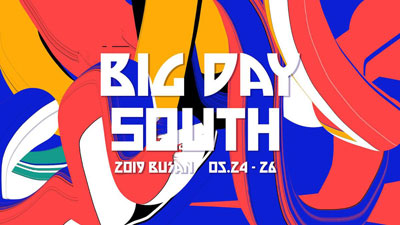