Courting the classic in Turkey

Courting the classic in Turkey

I recently had the chance to fulfil a lingering wish to explore the ruins of the classic civilizations nestled in beautiful Turkey. By hijacking a few days from a trip to the family in Cape Town, I could make this a reality – although on a tight schedule and a limited budget.

In antiquity, the cities of Asia Minor functioned as melting pots of culture as the Lydian, Persian, Hellenistic and Roman empires marched through, infusing these cities with their cultural imprint. As much as I wanted to survey the whole of this vast territory, I only had ten days to see as much as I could. My wish list included Nicaea, Pergamum, Sardis, Ephesus, Hierapolis (now known as Pamukkale), Priene, Miletus, Didyma and Halicarnassus (now known as Bodrum). This sketchy itinerary was borne out of a romantic fascination with the region that had its origins in a stopover in Istanbul in 2012. I was so taken with this exotic city that I consumed various books about its history and promptly dragged my wife there for our anniversary the next year. A short escape to Assos brought us face to face with the beauty of a remarkable Athenian temple. This perplexed me. I knew nothing about Turkey except for the history of Istanbul and yet here in front of me stood a Roman relic that rivalled those in Europe. Thus started an obsession that periodically went into hibernation as the daily grind eroded those amazing moments of discovery in ancient Byzantium. 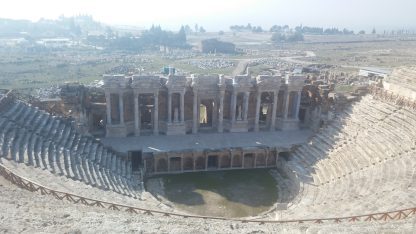 The Turkey affliction resurfaced after I read two books of historical fiction written by the inimitable Gore Vidal. In Julian, he recreates the life of Emperor Julian, the last apologist of the ancient gods, and in Creation he surveys the cultural landscape of the ancient civilizations (Greek, Persian, Indian and Chinese) through the eyes of Cyrus Spitama, grandson of the prophet Zoroaster and lifelong friend of Xerxes. As I travelled with his characters through these ancient lands, I knew I had to find my way back to the cities where these colourful figures nurtured greatness.

So when the opportunity presented itself, I promptly embarked on a ten-day whirlwind trip to discover the ancient world. Circumstances forced me to make interesting choices as I ventured into the past. I could only go in winter but, being an inhabitant of Seoul, I reckoned 15 degree days would be like spring. I had to do it on a tight budget, so public transport became my friend. I also had a very specific purpose; I wanted to explore in blissful, solitary peace, so no travel agent or tour could be involved. Lastly, to reach these classic cities, I constantly had to adjust my itinerary to optimize my time.

The ten days turned out every bit as amazing as I hoped they would be. My first major city was Pergamum, situated high on a hilltop in the modern day city of Bergama. As the cable car hoisted me up to the ruins of the city known as a centre of knowledge in ancient times, my anticipation grew with every broken wall spotted below. I was rewarded with all the splendour I could wish for and all the solitude I wanted. Here I got to see my first real Roman theatre, a vast structure capable of housing 10,000 spectators and built at an angle of 54 degrees, one of the steepest in the Roman Empire. Further up, the ruins of the temple of Trajan shined bright on its purposefully built platform, supported by vast arches that put modern architecture to shame.

Each archaeological site had its own appeal. At Sardis, I could marvel at the reconstructed Roman gymnasium complex, the colorful mosaics of the Jewish synagogue and the silent pillars of the temple of Artemis. Ephesus, the most well-known city of the Ionian League, was overrun by tourists, but an early start gave me the pleasure of taking in the majesty of the Library of Celsus undisturbed before the buses arrived. I also had the pleasure of meeting Bilam, one of the caretakers of the grounds and popularly known as the Cat Papa. This kindly soul takes care of the 50-60 cats that now rule the ancient city. At Hierapolis (Pamukkale), the travertines (calcium stone) cascading down the mountain have made this Roman spa town a popular destination for tourists, ancient and modern alike. Apart from this novel attraction, the old city itself is impressive in its stature, especially its theatre, which boasts a reconstructed stage and orchestra that epitomize the achievements of Roman art.

In Priene I realized that what made ancient architecture so extraordinary and these cities so special was the unique synthesis between natural and man-made beauty which the Persians, Greeks and Romans carefully weaved into their public spaces. Whether the location of a city or the backdrop of a temple, nature was not something to be used or discarded; rather, it was the pivot, the reference point from which architectural lines could be deduced – not in order to supersede what was found in nature, but to complement and enhance.

Despite my ascetic travel arrangements, which involved quiet evenings reading up on and planning the next day’s excursion, getting up at six in the morning and travelling 3-5 hours daily on buses in various states of crowdedness, I was touched by the friendliness of the people that surrounded me. Don’t have a bus pass in a new city? Expect the bus driver to allow you to hop on for free or an innocent bystander to sponsor you on his card, with a stoic nod of the head and a thin, moustached smile. At Bergama, Zafar dished up a beautiful meal in his two-table restaurant, adding extra yogurt, biscuits, tea and an engaging conversation at no cost. Similarly, my landlady at the Pamukkale Hotel invited me, the only guest for the night, into their living room for dinner as the restaurant was apparently too cold. Over olives, zucchini, cheese, yogurt, bread, beer and the seven o’clock news, I enjoyed the company of her and her husband as they colored in the spectacle on TV with grunts, gestures and frank opinions.  Only once was I forced to make use of an agent to organize a day trip, as no organized tours went to Priene, Miletus and Dydema in the winter. In Kusadasi, after trying several other agencies, Jimmy – the owner of Tour Altinkum – promptly worked out a very reasonable price for me for a private tour. I was indeed surprised the next day when Jimmy himself took me around, bought me a traditional breakfast, shared his insights on the country and the archaeological sites and generally just made the day comfortable and fun.

Getting to the cities on my wish list was not difficult, but it required some planning and a great degree of flexibility, as I discovered on my first day. The idea was to travel to Bursa via Nicaea (Iznik), the location of the first Ecumenical Council held in 325. I considered this reasonable as my plane landed at 5am and I could catch the first ferry at Yeni Kapi at 7.45am. As the Sea of Marmara slid by under the enormous ferry, I decided that such a detour with a heavy pack would be a risky and somewhat uncomfortable affair. Taking the bus from the ferry straight to Bursa’s metro turned out to be a good adjustment, as the city is fairly big and it took me a while to get to the area where I planned to stay. By the time I’d booked into the hotel it was past lunchtime – a task that would have been difficult to accomplish at night in the snow.

The next day I planned to take a bus from Bursa to Bergama, but the direct bus to Bergama only departed at 4pm. I took the 9 am to Izmir instead. I realized that it would be better to work from a central point and do day trips instead of trying to traverse new routes and find new hotels every day. This turned out to be a sound strategy as it reduced the amount of stress inherent in relocating hotels and saved valuable time that I couldn’t afford to lose. Loud, bustling Izmir (ancient Smyrna) was a good host, but not the ideal companion for a gracious stay-over. But then I chose to make Basame my base, as it was an excellent transport hub. The seaside promenade was beautiful and Konak Meydani was a pleasant respite from the dynamism of the city. If I had more time during the day to explore further afield or stay in the more upmarket areas, I might have discovered hidden treasure in the city’s crowded bazaars and parks. Still, day tripping from Izmir made my trips comfortable and hassle-free.

In nine days I saw all but one of the archaeological sights on my wish list. In fitting fashion, I ended my “courting of the classic” in Bodrum (once known as Halicarnassus). This beautiful seaside town was a delight to behold. The grand crusader castle of St. Peter stands guard over millions of Turkish lira worth of modern day nautical equipment. A summer playground for the rich of Europe and Turkey, the marina boasts some of the most extravagant yachts in the Mediterranean, the promenade aspires to be a catwalk for model wannabes and the bars, restaurants and discos promise a nightlife that would be difficult to forget. Well, as you know, I was there in February, in winter, so none of this materialized. After a delicious meal in a completely empty restaurant on the deserted promenade, I headed back to my pensyon for a solitary beer to celebrate the end of a wonderful trip. And that was the perfect ending I had wished for.

Ten magical days to remember, to cherish, to nurture. Ten days to craft a new wish list and populate it with exotic names such as Cappadocia, the Lydian Way, and Aphrodisias. Although I purposefully explored the ancient history of Turkey, what always fascinates me about the country is the rich tapestry of its cultural fabric. Here, the prominence of the Ottomans effortlessly mingles with the legacy of the Romans and the Greeks. Whether it is the food, music, people or art, Turkey delivers on a multitude of levels. So I will be back soon, but that will have to wait a while.  First I need to follow the ancients to their origins in Greece and Rome.

The experience of a lifetime

Jeongwol Daeboreum Celebrations to be canceled due to coronavirus concerns