Discover Tongyeong, the 'Naples' of Korea

Discover Tongyeong, the 'Naples' of Korea

Off the southern coast lies a port city with views so beautiful, it has earned the title of Korea’s “Naples.” Tongyeong is a small city but it is a great starting point when exploring the peninsula’s many islands by ferry. This “Naples,” has many great eats, local culture and mural villages to pique the interest of foodies and art lovers alike. 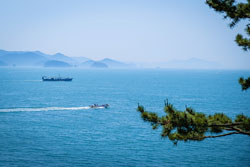 My family chose Tongyeong as our destination for the rare opportunity to go on holiday together. Unfortunately, there would be a few complications because of one of our furry family members also joined. Toto, our Maltese, came along for this adventure, but finding a pet-friendly hotel proved difficult. When I did find a room, it was only available for one night. So, our family vacation went from a long weekend to a short stay.

Take note, Tongyeong has no offseason, but it is especially busy in the summer. The streets around many of the city’s attractions are narrow, thus heavy traffic might prevent you from enjoying a relaxed coastal vacation. Either way, if you’re heading off to other islands on your trip, stay closer to the port for easier access to the ferry.

Since we did, in fact, choose to head to Tongyeong during the summer holiday, most of our quality time was spent in our Hyundai sedan stuck in traffic. Eventually, we made it to our first destination, Gangguan Port.

As soon as I stepped out of the car, I saw Geobukseon, a turtle ship which contributed greatly to the Joseon Dynasty’s victory during Japanese invasions in 1592 and 1597. History buffs and curious visitors can enter the turtle ship for free and check out the various attractions dedicated to Admiral Yi Sun-shin, who designed the battleship.

The odor of fish from the half-century-old seaport that hauls tons of seafood every morning led us to the Jungang Fish Market. My father and I walked through the narrow alleys of the open-air market filled with grannies selling fish out of plastic tubs. It was a challenge to pick one amongst the dozens of fresh catches for our dinner. I loved the old, rustic atmosphere of the market and enjoyed haggling for the best prices. We bought flat fish, rock fish, red sea-bream, clams and conches to have later. 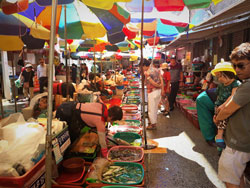 The merchants’ Gyeongsangnam-do dialect was amusing to me, probably because the area is not far from Jinhae, where I served in the Korean Navy 15 years ago.

If you purchase seafood from the market, you can grab a table for 3,000 won (or $2.47) per person in the eateries nearby and enjoy a raw fish meal.

They’ll also cook up your purchase if you’d like. The price includes sauces and greens for veggie wraps. It was a nice spot for a good lunch on the way to our next activity. 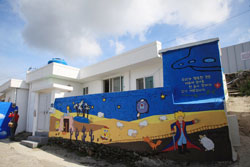 Our next stop, Dongpirang Mural Village, is a 10-minute walk from the fish market. The working-class village is a lovely place to take photos as it is covered in colorful murals. In 2007, the village was set to be torn down, but local students stepped in to protect it by painting the walls and changing the city officials’ minds. The village was preserved for the residents and converted into a beautiful attraction with colorful alleyways, amusing murals and sculptures. Don’t miss the snow-white angel wings mural, a great photo op. Although the village is a tourist attraction that is open to the public, it is also a residential area. Be mindful, keep your voice down and keep an eye on your children. 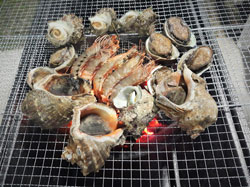 Nestled in the surrounding area of Mount Mireuksan, we stayed the night at the Tongyeong-Guest Pension with a great view of the ocean. It was a lovely place and only a 10-minute drive from Tongyeong Jungang Market. The pension has a beautiful fenced garden where Toto had plenty of space to run.

Though not a fancy place, my family was happy that we were able to have Toto with us and that he could enjoy the room freely without a leash. I also liked that my dog was able to socialize with other guests’ pets as well.

For 20,000 won (for four people), we used the pension’s BBQ grill service, which includes charcoal and tongs. We grilled the seafood we picked up at the market earlier and spent a nice evening dining al fresco together. The clams and conches were overcooked because of my poor cooking skill, but it was a pleasure to share this meal with my family.

After dinner, my brother and I enjoyed riding electric kickboards along the beach near our hotel. We rented these from EI MAR, a café near our hotel offering rentals for 10,000 won per hour. This is a great way to explore the city quickly and efficiently.

Order a drink at EI MAR, like coffee, and save 1,000 won off your rental. We really enjoyed the kickboards as we explored the area.

Though it was a short trip, my family and I enjoyed the time we spent together. Even our dog had a good time. Next time, we’ll definitely plan ahead to make sure we get to see more of Korea’s Naples.

Toto is an 8-year-old maltese. He is pretty independent and will not listen to me unless there is a dog snack involved. 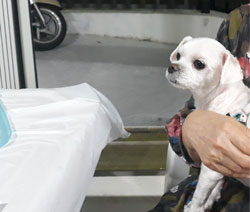 I adopted Toto when he was a puppy, and he is one of the reasons why I am often at my parent’s house. I miss him a lot when I’m away.

This trip was my first time traveling with Toto and since it went so well, I’m thinking of taking him on more trips in the future. Toto had never seen the ocean before and he seemed to enjoy it. As for my family and I, we really enjoyed creating some nice memories with Toto. 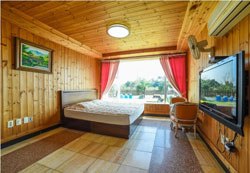 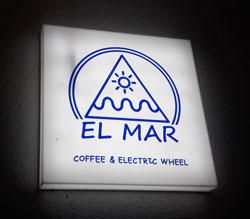 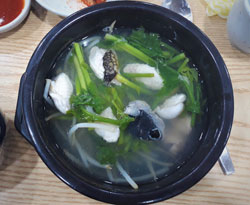 For bibimbap, we chose Wonjo-milmul-sikdang because the cooks aren’t heavy-handed on the red pepper paste, allowing diners to appreciate the flavors of the native ingredients used in every dish.

Sea squirt bibimbap is made up of bright orange sea squirt, veggies, seaweed, and sesame oil all mixed together with rice in a bowl. With every bite of the sea squirt, the fresh taste of the ocean filled my mouth.  t was delicious!

Next, we went to Buil-sikdang to try jol bokguk, which has over 40 years of history behind it and is considered a local hangover cure. At 12,000 won for the bowl, it was a good-sized serving. It came with rice and various side dishes, including a few slices of fresh raw fish. The soup was light, and the boneless pufferfish had a wonderful silky texture.

Buil-sikdang is the kind of place you go to after a long night of drinking on the port and a way to relieve a hangover the Teongyeong-way.

What the heck is a sea squirt? 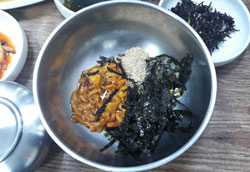 Sea squirt, or sea pineapple, is a marine invertebrate filter feeder permanently attached to a surface (i.e. rocks, crabs) at the bottom of the sea, according to Encyclopedia Brittanica. Known as meongge in South Korea, sea pineapple is a type of edible sea squirt mostly consumed in the country.

Although they do not look too appetizing, meongge have proven to be quite a tasty delicacy. The rubbery red sea squirt resembles a red rubber balloon with tiny bumps. More than 70 percent of meongge in South Korea are caught around Tongyeong and Geojedo island.

It is commonly served in thin slices with red chili sauce. Only the watery golden flesh is consumed, and its texture is soft and slippery with a unique marine fragrance. The taste is strong with a hint of bitterness and an aftertaste which lingers on the palate. 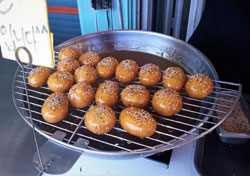 Born after the Korean War and made to calm fishermen’s hunger, ggul bbang is similar to doughnut holes popular in the States. Here, however, the soft dough balls are filled with mashed red beans, fried, and then generously glazed with plenty of honey. The bread itself is quite sweet, so I prefer it without the honey. Almost all of the food stands near the entrance of Tongyeong Jungang Market sell this sweet snack.

Explore Korea and bring your pet, too

Stationed in Korea? Tongyeong a terrific trip to take

VIDEO| Catch a wave without traveling to Seoul

Tongyeong, Korea selected as the best in Smart City Tourism

Exploring Korea: Boryeong anything but boring