Gongju is a historic city in Chungcheongnam-do. Formerly named Ungjin, the area was the capital of the Baekje Kingdom. Gongju is a major tourist destination in the South Chungcheong area. It is full of attractions that tell the history of Baekje and the struggles during the Three Kingdoms Era as well as some awe-inspiring juxtaposition of historical sites and nature.

You’ll be able to visit some of Baekje Historic Areas which are eight archaeological sites, recognized as UNESCO World Cultural Heritage Sites, spread over Gongju, Buyeo, and Iksan. 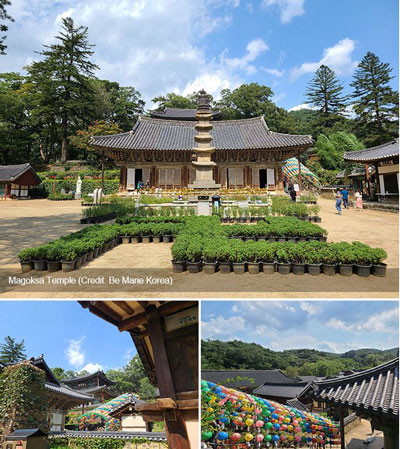 Magoksa Temple is one of the seven famous mountain monasteries, sansa, in Korea. The temple was built in the 9th century when Seon Buddhism began to spread in the peninsula and has been an important center for Korean Buddhism.

The temple has a unique layout with a stream dividing it into the northern and southern sections. The northern compound of Magoksa Temple houses the famous Daegwangbojeon, the temple’s main hall as well as a five-story stone pagoda adorned with a Tibetan-style top that was built during the 14th century.

Later on, the temple gave refuge to the famous Korean independence leader Kim Gu (Baekbeom) in Baengnyeongam Hermitage after he escaped from prison. Today, you can find a juniper tree between Daegwangbojeon Hall and Eungjinjeon Hall of Magoksa Temple which is believed to have been planted by Kim Gu in 1946 when Korea was liberated from Japanese colonial rule.

Gongju Hanok Village (also known as Gongju Traditional Korean Village) was opened for the World Baekje Exhibition which was held in September 2010. The village was constructed between the Tomb of King Muryeong and Gongju National Museum.

Here you can find group accommodations, individual accommodations, additional facilities, and a shopping center built using the traditional Korean architecture, hanok. The buildings are made of pine trees and Japanese cedar trees, which are reliable and safe construction materials. You’ll be able to find a number of traditional cultural activities around the village, including a traditional Korean wedding ceremony in the tradition of the aristocratic families. 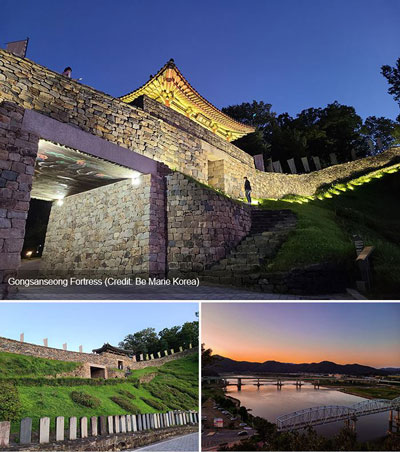 Gongsanseong Fortress is an ancient fortress built during the Ungjin period (475-538). The remaining heritage sites give us a glimpse into the era’s construction techniques. The excavations have revealed valuable insight into Baekje’s civil engineering and the techniques and advancements gained through exchanges with ancient China and Japan.

The fortress wall is roughly 2.5 kilometers long. You can explore the area in two different ways. You can start in the parking lot, head to the west gate, Geumseoru, and then walk along the available trail. Or, at the beginning of the cement road turn left and head to the top of the fortress. The area contains around 80 building sites, roads, drain channels, reservoir facilities, and more. 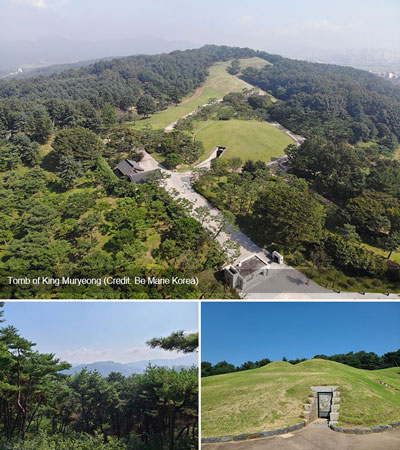 The Tomb of King Muryeong is the only identified royal tomb from the Three Kingdoms Period. It held the bodies of King Muryeong (r. 462-523) and his queen as well as over 2,900 artifact pieces. The discovered artifacts include the royal crown ornaments and other types of accessories that offer a valuable glimpse into the royal traditions of its time. If you’re interested in viewing these relics and artifacts, you can find them in the exhibition halls of Songsan-ri Ancient Tombs and at the Gongju National Museum.

King Muryeong was Baekje's 25th king. The tomb was discovered by accident while pipes were being installed to prevent the other areas from being flooded. To preserve these important cultural heritage sites, the excavation sites are currently closed. However, you can take a look at the recreations of the interior of Tomb No. 6 and the Royal Tomb of King Muryeong. The area is believed to contain 17 graves from the era. To this day, seven graves have been discovered.

Gongju National Museum is dedicated to displaying and providing knowledge on the history of Gongju. It has a number of exhibits such as King Muryeong’s Royal Tomb Hall, and Prehistoric and Ancient Culture Hall which focus on the historical findings from the area during different eras, starting from the Stone Age.

You can find different artifacts and national treasures on display, such as artifacts excavated from King Muryeong’s Tomb and Buddhist artifacts (including some stone structures) from Daetongsa Temple and Seohyeolsa Temple. At the back of the museum, you’ll find the Jeongjisan Historical site where memorial services and rituals were performed during the Ungjin Baekje Period.

Gomanaru Dolssambap offers a wide range of Korean traditional dishes prepared with the customer’s health in mind. The restaurant has a nice view of the Gongju Gongsanseong Fortress and is a nice place for visitors to relax and enjoy Korean traditional health food.

Edge is a cafe in a hanok style building where the visitors can take a break and recuperate. They offer drinks and pastries which are both delicious and come beautifully prepared. The cafe’s interior is a mixture of modern and traditional Korean design elements and the space is comfortable and cozy. Edge is located close to Gongju Gongsanseong Fortress so you can take a break here during your trip.