Enjoy makgeolli inspired by the white lotus at Sinpyeong Brewery

Enjoy makgeolli inspired by the white lotus at Sinpyeong Brewery

Makgeolli has a deep history in Korea as a farmer’s tonic meant to give them energy to continue their hard day’s work. 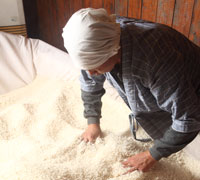 The rice wine is also pretty inexpensive and, thus, hit its peak in the 70s and 80s as an affordable libation. Soon, however, the alcoholic beverage with a milky consistency which once assuaged Korean’s hunger and sorrow, was replaced by soju and beers as the country entered the Industrial Age.

Recently, the drink is experiencing a bit of a revival due to clever marketing as a health tonic. In an effort to keep the pace of the rise of makgeolli, even the Korean government is taking notice, offering support for brewers in different regions who are producing the liquor and thus helping to reduce the stigma of old and low-grade alcohol it once had.

One of these brewers is the Sinpyeong Brewery in Dangjin on the south shore of Bay of Asan. Established in 1933, Sinpyeong Brewery is the city’s only dedicated traditional brewery and is run by Kim Dong-gyo and his father, Kim Yong-se, a designated Korean liquor brewing grandmaster.

As a family business spanning three generations, the brewery uses high-quality rice produced on the fertile granary as the key ingredient for the brewing of the rice wine. They have kept their own brewing skills and heritage despite the downturn during the Japanese colonial rule and the industrialization period, which saw a departure in the market away from makgeolli towards imported wines and beer.

Visitors to Sinpyeong Brewery can get a hands-on brewing experience for parties of 15 people or more. This tour includes brewing rice wine, a makgeolli sommelier course, making distilled water, making a pancake with yeast, and more.

I recently visited this place, which is filled with aroma of makgeolli, with a few friends. When we arrived, an old wooden fermentation bucket taller than me overwhelmed us. Though the rustic giant bucket from Japan is no longer used, the wear on this thing made its long history obvious.

Since my group didn’t meet the 15 person-minimum for liquor brewing, we instead enjoyed a tasting. Sinpyeong brews four different variations of the rice wine, yet they all have a distinct white lotus fragrance unique to this brewery.

Among the four, the first liquor we tasted was Snow (1,200 won or about $1.03) with an alcohol content of about 6 percent in a white plastic bottle. Though it’s an entry-level of makgeolli, Snow was once served at a celebratory dinner party hosted at the Blue House, South Korea’s presidential residence. Snow has a crisp texture and was surprisingly clean like its name with a sweet after-taste.

The Misty (ABV 7%) which is high-grade makgeolli (3,500 won), has a deeper flavor than Snow and a very mellow texture. It had a great, slightly tangy sparkling flavor which I really liked. Others thought it was great, too, as it won the grand prize in the Korea traditional competitive exhibition in 2014. 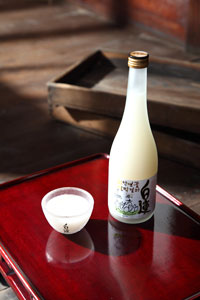 They also have a pasteurized version of Misty, which contains no gas-forming yeast, making it less heavy for export. The feeling of refreshment is a bit weak due to the lack of carbonic acid, but it can be stored for up to one year. Misty is a good offering as a gift considering the regular makgeolli is highly perishable, is sensitive to temperatures and has a short shelf life.

The finale of our tasting was Baekryeon Malgeunsul (ABV 12%), a real alcohol lover’s rice wine. The brewery’s prolonged fermentation and elaborate filtration process give this liquor a heavy flavor and adds to the depth at the same time.

During the tasting, my mind kept thinking about kimchi. Makgeolli is made of rice, so banchan, Korean side dishes of rice, kimchi and other appetizers, also makes for a good pairing.

Makgeolli is a great refreshment after a long days’ work, especially in the heat of the summer. Head over with some friends to Sinpyeong and learn about this traditional Korean liquor. And, hey, don’t forget to say, “gun bae!” (cheers!).

Near Sinpyeong Brewery, the tiny AMI Art museum is a must-see repurposed school building with many great photo ops sure to please your Instagram followers.

I’ve seen many photos of this privately-owned art gallery on social media, so I decided to stop in. The corridor, with colorful art hanging from the ceiling, is especially popular online, so make sure to snap a pic.

The building served as the rural town’s school until its closure in 1993, but then was redeveloped by a couple of installation artists. The building became an experimental museum, hosting humanities and art classes for locals, and even a permanent exhibition space.

Much of the building’s style was preserved, including the classroom and small schoolyard out front. Walk through the building’s old classrooms for a look at the many artworks on display. When I was there, a group of people were taking an art class, while outside many visitors were busy posing for photos.

Behind the museum, a nice and cozy café serves hot coffee and a variety of delicious sweets. After you enjoy the coffee, stop by the old Korean-style house.

According to the museum’s webpage, the old house is used as lodging for residing artists. For me, the shabby house looked too old to live in, but it is another picturesque spot with its old items like stacked rice bowl and traditional household items.

Experience some of the local art scene while in Dangjin. This is just the type of spot to get some great pics and spend some time exploring with friends. 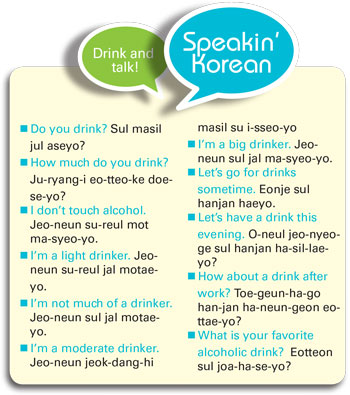 Summer in the beauty of Eunpyeong Hanok Village