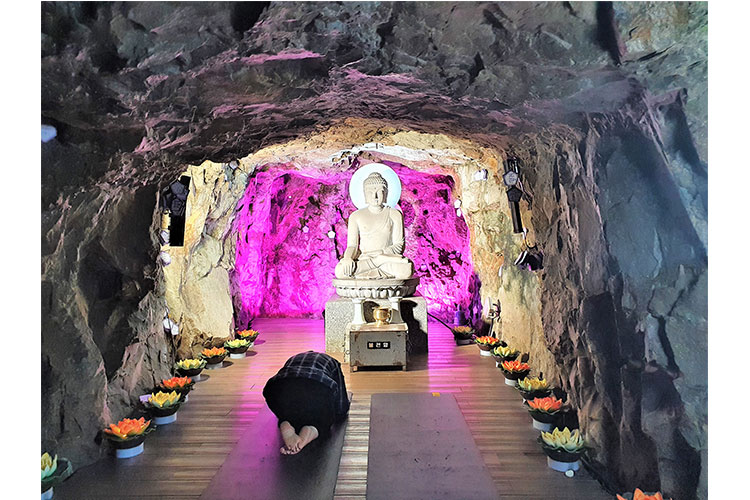 From outside, the cave looks disappointing, but I decided I wouldn’t judge the book by its outdated cover. The cave entrance ticket was 7,000 won (or $6.04) for adults, but I bought a combo ticket including a boat tour for 12,000 won. Hold onto your tickets because both the cave and boat require proof of purchase!

When I stepped into the cave, chilly air greeted me, so don’t forget a light jacket. The cave spans 2.5 kilometers in length and is connected like a maze into 10 different sections. Each section is decorated with colorful lights and a variety of sculptures and installations.

The Media Art Center section was one of the most impressive. Here, I enjoyed a laser show projection on one side of the cave wall. Though smaller than other caves I’ve been to before, the show was lively and made me stop in my tracks. Past the Media Art Center, toward the end of the cave, you’ll find a section where visitors can make a wish upon a stone Buddha statue. I made a wish for this terrible pandemic to end soon, then made my way to other sections.

At the center of the cave, check out the ancient Egypt theme section filled with artifact replicas. Another must-see spot is the Amethyst Geode section where you can see veins of amethyst and amethyst stone yourself. I hadn’t realized just how beautiful and deep purple the amethysts are until I saw them here.

Stop at the wine shop near the Amethyst Geode section if you need a refreshing break over a well-aged glass of wine. Another section is Jurassic World, featuring great dinosaur sculptures perfect for some snapshots with your family. After spending some time exploring the caves and admiring the beautiful amethyst, I made my way back outside and headed to the highlight of this park: a boat tour of the cave.

The boat dock was just a short walk from the ticket booth. When I got to the dock there was already a good line, but I put on a life jacket and within 5 minutes I was on my way. The water depth inside the cave is 6.5 feet along the tour route. You might think it’s not too deep, but the boat moves fast, so hold on tight! Seriously!

You may not see the stalactites or stalagmites you’ve probably seen at other caverns, but this tour offers another type of fun. During the tour, the guide stops the engine and points to the wall and ceiling with a flashlight for a close look at something you may not have noticed or seen before: a beautiful amethyst vein!

Due to the speed of the boat, the water was a little choppy, which added to the fun. The 0.43-mile round-trip tour took roughly 7 to 8 minutes. The tour time was a bit short for me, but I wasn’t disappointed because it was such a unique experience. Outside the cave, there is a small amusement park for kids called T-Land, which offers family fun featuring kiddie rides and interactive play areas that youngsters will love.

All in all, I enjoyed my time in the Detroit of South Korea checking out an attraction I would have never experienced had I assumed it was only the home of auto factories. The Amethyst Cavern Park is truly a hidden gem I’m glad I found. 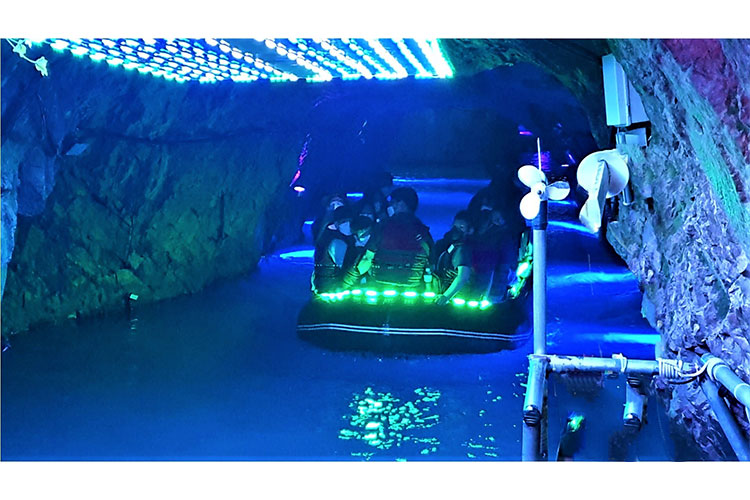 Don’t forget to leave time for a short walk to the Songunsa(송운사) Temple before heading home. Soungunsa Temple, which is next door to Amethyst Cavern Park, is housed inside a mysterious cave. Climb the steep yellow stairs that lead to the temple. At the top, you’ll be greeted with a panoramic view of the beautiful surroundings and the famous Yeongam Alps. The exteriors of the cave temples were decorated like a natural park and filled with stone towers and buddha statues that are brightly painted in gold. The interior of the temple rooms was not decorated brightly like regular temples and were filled with more golden statues of Buddha’s disciples. Inside the cave, you’ll see worshippers praying or lighting incense. 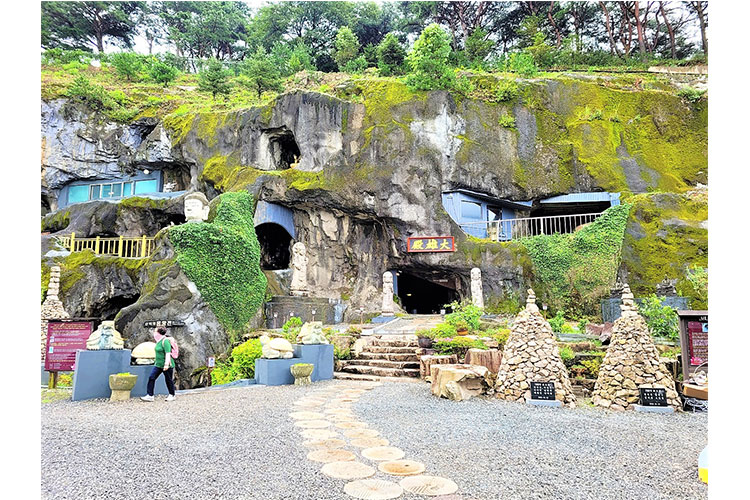 A unique boat ride at Yongji Park in Changwon

Unwind with leisurely stroll at Songhae Park in Daegu