If ferociously tall cliffs, memorizing labyrinths of stairs, rare sightings of goat antelopes (not kidding), and panoramic peak views sound like your kind of thing, then this post is undoubtedly for you! Dubbed South Korea’s 17th National Park, Woraksan National Park is a divine stretch of landscape connecting Sobaeksan and Songnisan. The best part? It’s only a short ~2-hour drive from Osan Air Base! Read on as I hope to capture even just 10% of how much beauty and adventure this park offers.

Like all my weekends, I was bound to get out of Osan and experience another corner of South Korea that I hadn’t seen yet. I pulled up Kakao maps, saw a patch of green on the map east of Osan, zoomed in, and there in large font was “Woraksan National Park”. Estimated time to arrival? ~2 hours. I threw my hiking boots on, filled my camel back up with water, and set out the door. 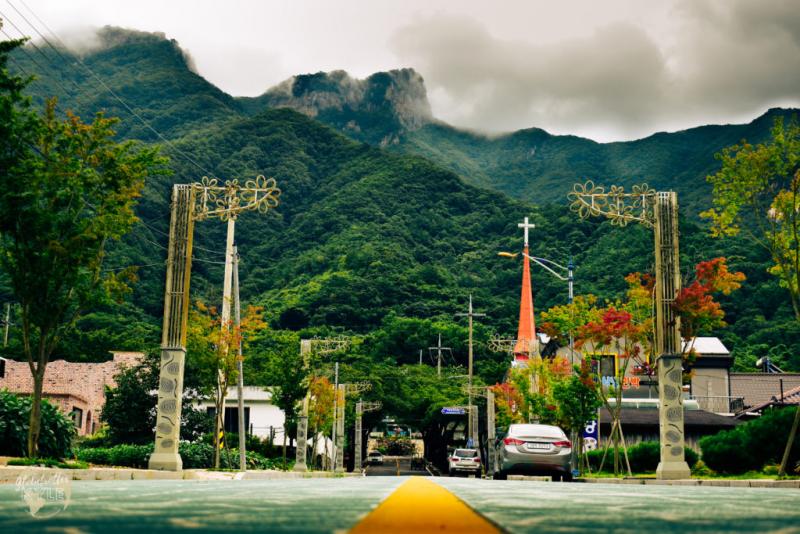 As I cruised along the two-lane road leading to the western entrance of the park, I swayed side to side as the road curved and twisted along the landscape. An illusion of hypnosis set in somewhere between the curves in the road and I was helpless as my mind drifted back to a memory of cruising through the Rocky Mountains of Colorado. On my left, I could see a fraction of the dozens of fingers comprising the massive Chungju Lake and on my right, I had the lusciously green pine and Mongolian oak forests stretching towards the heavens with every branch. I felt like I was home, and almost instantly I could feel a weeks’ worth of tension leave my body. I knew I had found a perfect spot to escape to.

When I finally arrived at the park, a mysterious fog had rolled in and began swallowing up the tops of the mountains inch by inch. It felt like I was in one of the ominous scenes from Jurassic Park where at any moment, a pterodactyl might swoop down and take my lucky hiking hat right off my head. This, of course, only made the experience that much more unique and I got more and more excited the thicker the fog rolled in. 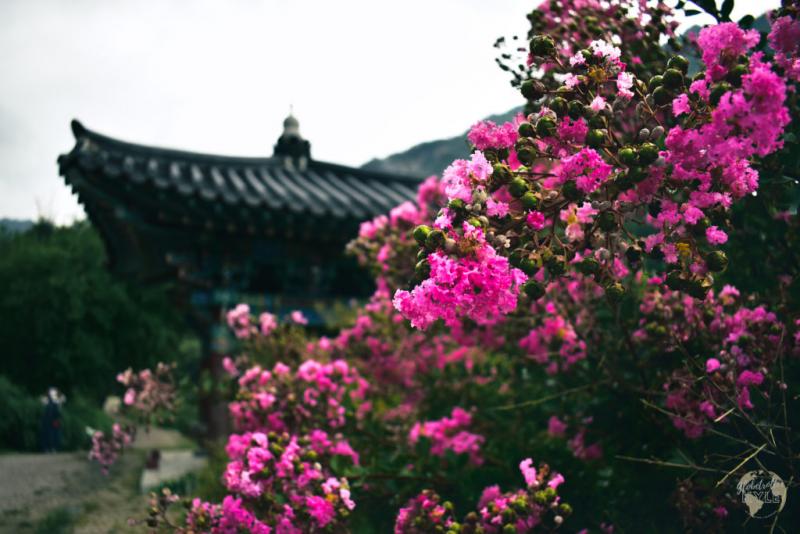 I began at the entrance near the Deokjusa Temple so that I could hike the tallest peak in the park, Yeongbong mountain. Not only was there amble parking at the trailhead, but there was also a quaint little cafe that served excellent espresso. As I sat at the cafe sipping my pre-hike fuel, I surveilled the fog as it slowly encroached on the sides of Yeongbong before retreating back, like slow motion waves that were unable to muster enough momentum to fully engulf a boulder on the sea’s shore. I sat, entranced, but more so in awe at the fact that I was about to hike up into this phenomenon to bag another mountain summit. I finished my espresso and began the hike.

Though stopping and viewing the Deokjusa Temple crossed my mind, I kept my eye on the prize of wading through the dense fog to catch a glimpse of South Korea from within the clouds (oxymoron, I know, but it sounded cool as I came up with the idea lol). However, like any good globetrotter, I promised I’d stop to take photos on the way back down and fully experience what the temple had to offer. The next waypoint I encountered was the entrance to the park where I paid a few dollars to enter and was on my way. 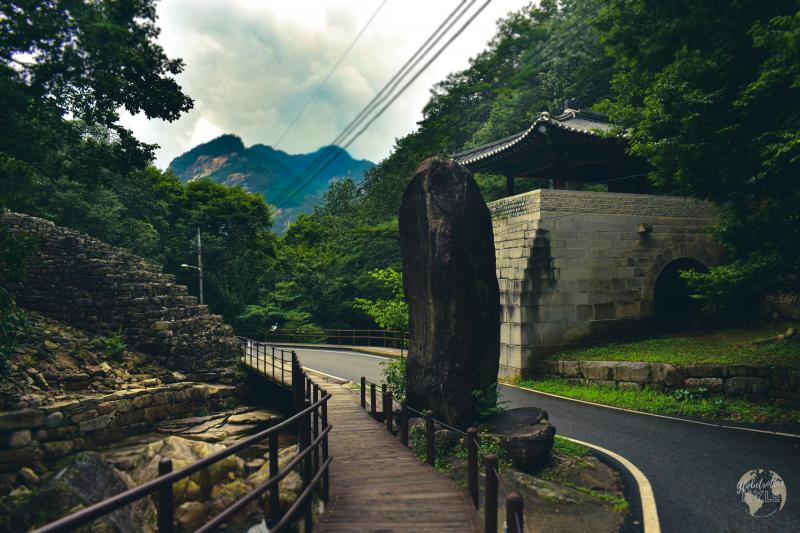 If you’ve read some of my stories in the past such as my Seoraksan National Park visit then you know that hiking in Korea is a mix of blissful trails aside soothing rivers before abruptly changing to near-vertical stairs that ascend you hundreds of feet up rocky cliffs leaving you figuratively and literally breathless. Well, as my quads, lungs, and dopamine levels can attest to, this hike was no different. However, I was rewarded in droves at the 1.5km mark when I stumbled upon a massive 13m tall Buddha carved into a rock face. This, I had to see!

According to the documentation, the rock-carved buddha is presumed to have been made around the 11th century (918-1392 AD) While the body and facial features of the buddha are typical of rock-carved depictions from this period, a wooden structure was believed to have been installed to protect the buddha based on the square-shaped holes carved in the rock to each side of the buddha’s head. At 13m high, legend has it that Princess Deokju founded this temple to express her sorrow of the end of the last Silla kingdom which fell to Goryeo in 935. 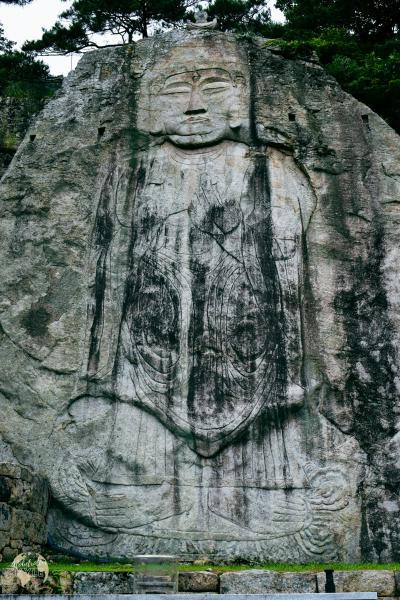 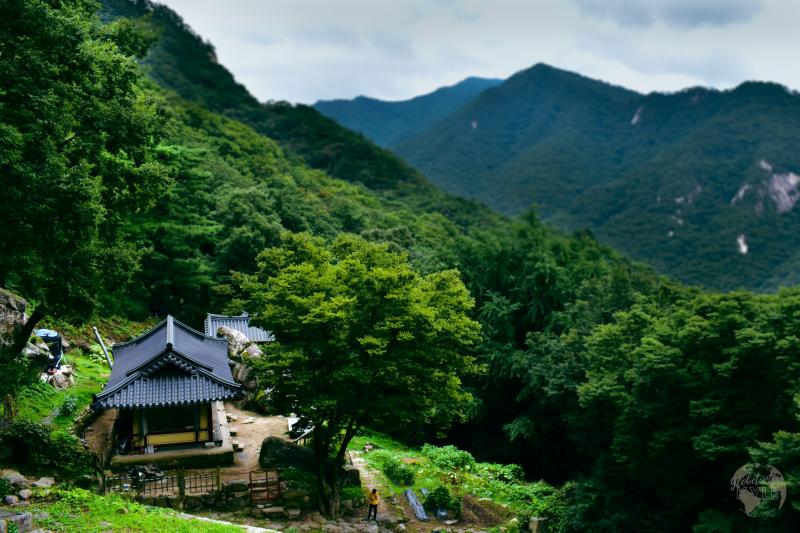 Pressing on another 2km, I came to a clearing in the dense tree cover at a helicopter pad that framed Yeongbong perfectly a few kilometers away. I gazed ahead and like a fortress wall towering hundreds of feet above me was the south face of Yeongbong and like my drive to the park, I felt helpless as my mind drifted back to another memory. This time, my mind was reliving the experience I had as I encountered the north face of Long’s Peak in Colorado as I made it to the boulder field. I felt the hair stand up on my neck and I had to shake my head as I felt like I was having a deja vu!

The two sights seemed so similar that my mind was literally glitching as it tried to comprehend how Long’s Peak had suddenly jumped all the way over to South Korea or how I had somehow hiked through a wormhole that placed me back in Colorado. In that moment, I experienced the sensation of genuine joy. My entire body rejoiced, and I couldn’t help but smile as my mind was comparing two very, very different things relative to this planet but two very, very similar things relative to me. You see, hiking tall mountains is challenging and exhausting, but I’ve always considered it “worth it”. Sure, I get a good workout in and make a good memory out of each hike but, I’m always more infatuated with each journey’s unique characteristics. Hence why I started my blog: to formally capture those unique characteristics. 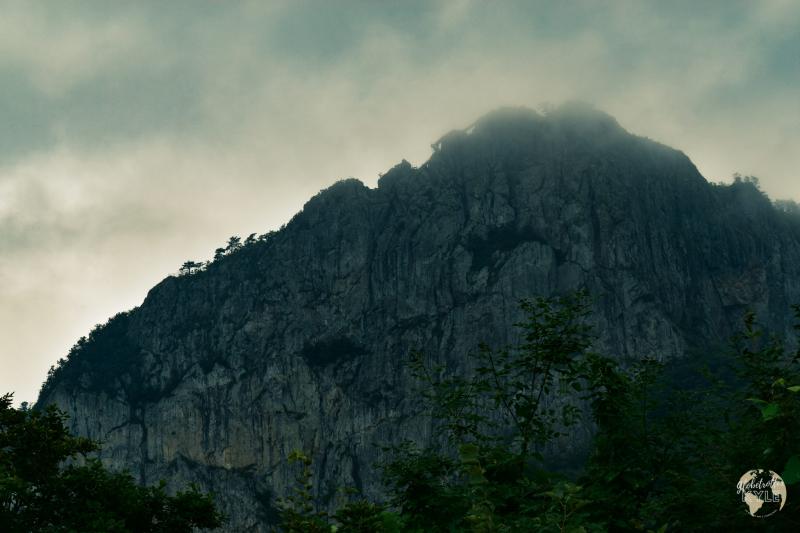 Had I never set out to summit Long’s Peak in Colorado, I would have never had the image of the daunting, yet strikingly beautiful north face seared into my brain at 7:38am on a June morning in 2020. Furthermore, had I never set out to summit Yeongbong in South Korea, I would have never been able to say, “I’ve seen something like this before”, though they are on complete opposites of the world. I might be one of only a handful of people in this world that has ever or WILL ever be able to make this comparison. This, this is why I explore. For these moments, right here. 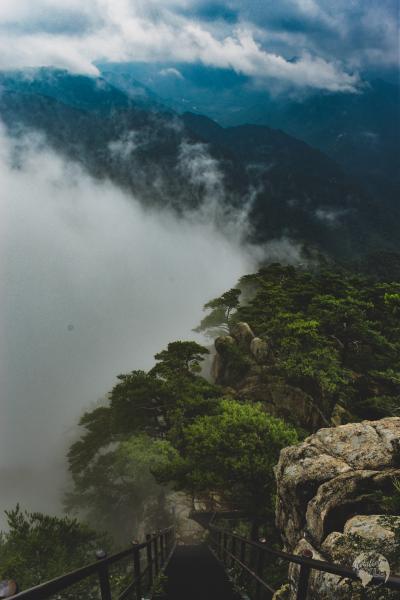 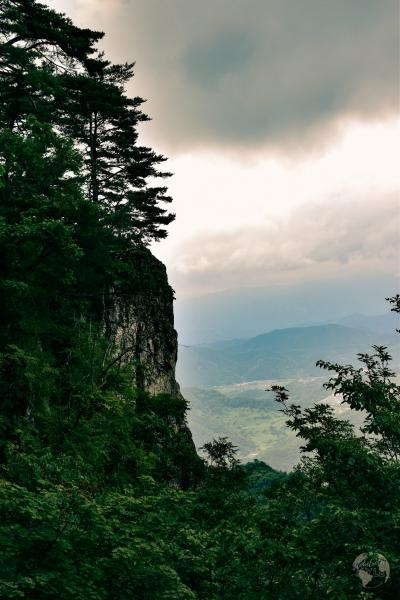 Pressing on I reached the summit and was quickly overtaken by the fog. I suppose Zeus finally gave the winds and the clouds permission to overthrow Yeongbong because when they came, they unleashed a good amount of pent-up energy. I took what pictures I could and proceeded back down the mountain before stopping at Deokjusa Temple like I promised. 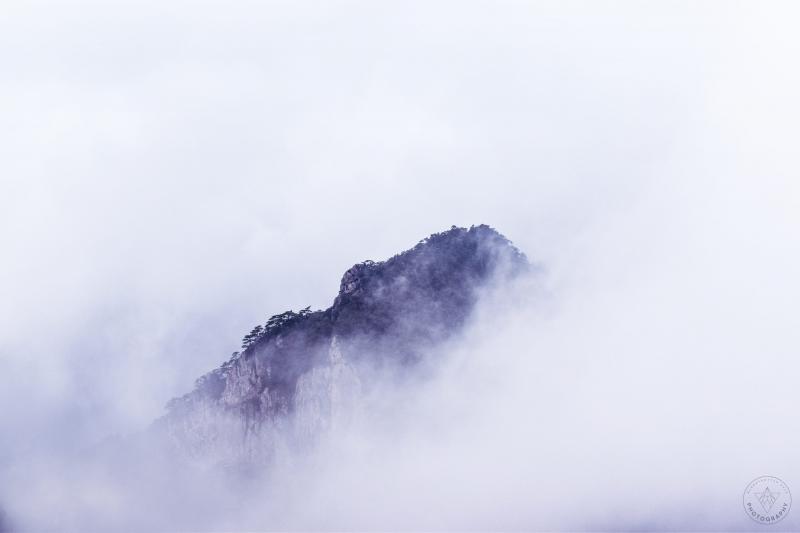 Though I kept an eye out, I unfortunately didn’t see any of the goral antelopes during my hike–bummer right?! However, the signs posted in the park mentioned that these rare beauties love to feed on plant resources such as the red pepper trees and azaleas in the vicinity of Yeongbong Peak, so if/when you go, ask one of the park rangers where these species of plants grow and see if you can’t spot one for yourself! 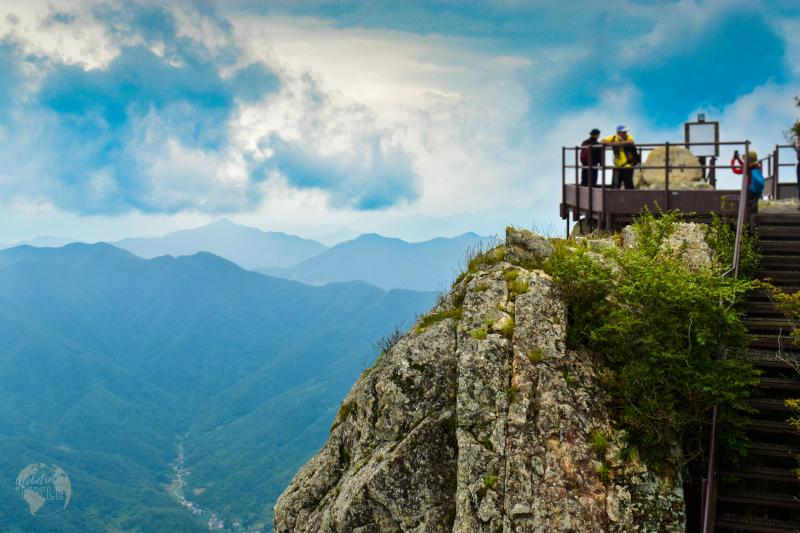 When I first arrived on the peninsula, I was honestly pretty distraught at the fact that I wouldn’t be able to travel like everyone else before me had. Everyone always tells you to travel if you get stationed here, but that was all pre-pandemic; they don’t know the massive hurdles it takes to get off-peninsula let alone back on thanks to COVID. And, even if we could leave, where would we go? Japan is currently locked down again, the Philippines aren’t taking any visitors, and Vietnam is only allowing business travel; everyone’s closed!

But, as I mentioned in one of my earlier posts about exploring during a pandemic, I believe there’s real beauty and opportunity in this situation. I believe there is a massive silver lining to this pandemic that’s all but closed travel outside of South Korea and that’s the redundant truth that outside travel is essentially closed. In other words, the seemingly disheartening notion that being confined to only seeing South Korea somehow renders you “stuck” here couldn’t be further from the real truth: South Korea is overflowing with adventure and beauty–all you have to do is get out there and take advantage of it. I promise you that the geography of this peninsula will surprise you at every turn and it will exceed every expectation you have of it, all you have to do is give it the chance it deserves. Who knows, the next place you decide to visit might transplant you back in time or even to another part of the world like it did for me on this trip, and isn’t that all that travel essentially is? 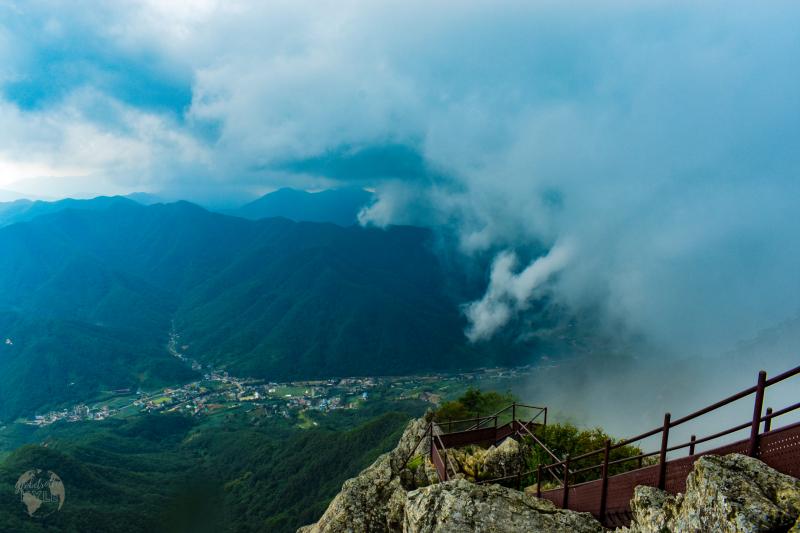