Busan is home to seven great beaches which has made it one of the best places to visit during the year. Here’s a look at what the beaches have to offer.

Beaches around the city 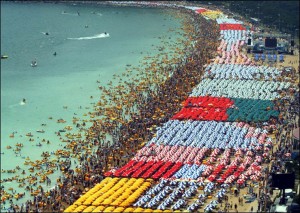 Over the past several months, ships have been busy just offshore dredging sand and pumping it up onto the beach to double the width of Korea’s famed strip of coastline. While the summer bookend months of June and September are the best times to enjoy the beach with moderate crowds, July and August is when Haeundae explodes with upwards of 700,000 people swimming, lounging or shuffling along the boardwalk in the summer heat. Nearby there are plenty of great restaurants and good backstreets leading off in all sorts of interesting directions.

To get there, take subway line 2 to Haeundae Station. It’s about a five-minute walk. 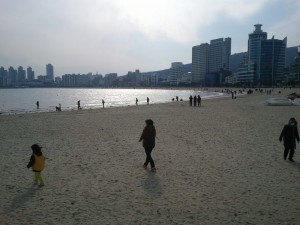 If Haeundae feels a bit like South Beach, Miami, then Gwangalli is Coney Island: laid back, more room to stretch out and a semi-abandoned, rusting amusement park. At the end of the Suyeong River trail, the beach makes a great destination for a morning bike ride or jog. The absence of towering hotels means there are more dining and drinking options with ocean views. If you’re feeling brave, you can grab a kayak at the southwest end of the beach and dodge the wind surfers and jet skis on the open water. After sunset, the Diamond Bridge, an iconic suspension bridge that spans the horizon, comes to life with an elaborate LED light show.

To get there, take subway line 2 to Gwangan or Geumnyeonsan Station. It’s about a five-minute walk. 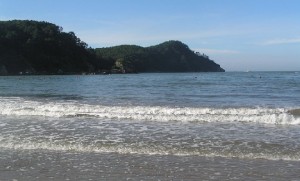 Located at the estuary of the Nakdonggang River and just eight kilometers from downtown, Dadaepo Beach is a great place to chill out and have a picnic, collect a few seashells and go for a swim in the shallow surf. Just up the river is one of the best places in Korea to check out migratory birds chilling in the marshes. At just under a kilometer long, it is beautiful but little-known to foreigners because of how far away it is from the city center.

To get there, take bus number 2 or 98 from Busan Station or get off the subway at Sinpyeong. 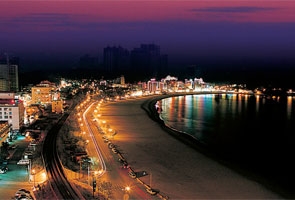 It may be just on the other side of Dalmaji Hill, but Songjeong feels much further away. The skyscrapers of Busan proper are blocked from view, and the crowds are much smaller. It also has the only reliable breaks, attracting surfers who chase waves and girls who chase surfers. At the end of the day, Songjeong is one of the only nearby beaches that allows camping, but with no restrictions on fireworks or soju, don’t expect a quiet night’s rest.

Officially Korea’s first beach (as of 1913), Song-do has re-emerged as a must-stop on local tours. Song-do, which translates into Pine Island, was given its name due to the lush pine trees adorning the outskirts of the beach. Located just three kilometers from Nampo-dong, Song-do offers a romantic backdrop for couples looking for some peace and quiet, away from the hustle and bustle of the city.

To get there, take bus 34 or 134 from Busan Station southward. 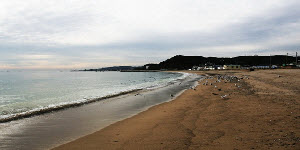 The 1.5-km-long Imrang Beach is also located in Gijang County and is famous for its fresh water and fishing. With the water level only four feet deep, many families with young children find the beach ideal for swimming, while the neighborhood has a distinct character of its own. Tongdosa Temple and Jangansa Temple are located nearby for those looking to get out of the beach scene for the afternoon. Though relatively quiet, more tourists have been frequenting the area lately due to its golden sand. 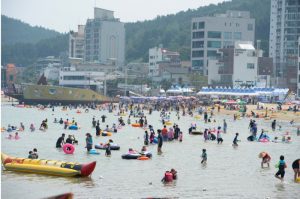 One of the two major beaches in Gyesang County, the horseshoe-shaped beach, which runs from the point where the Icheon River meets the Icheon Port to Horyeok Port, gives a warm and cozy feeling. You can get to the seaside in 5 minutes by walking out of Exit No.1 of Donghae Line. Ilgwang Beach, which is the background of Oh Yeongsoo’s novel ‘Seommaeu’ and the film ‘My Brother’, boasts beautiful scenery and has become a popular tourist spot in recent years for those looking to avoid the more crowded beaches.

To get there, Ilgwang Station on Donghae line, exit 1 then about 5 minutes walking to the beach and take local bus numbers 180, 182, 188 → Get off at Ilgwang Beach bus stop

More than 1.2 million visitors hit Busan’s beaches this past weekend

How safe is the sand and water at Busan’s beaches?

257 jellyfish stinging incidents have happened in Busan this summer