Exploring Korea: Taking a trip with friends to Cheongdo

Exploring Korea: Taking a trip with friends to Cheongdo

As we sat there planning trips for the school vacation during monsoon season, my friend Melanie and I knew that we needed a flexible indoor and outdoor plan. Something that was fun for the kids, as well as of interest to the adults; somewhere the children could run around but wasn’t too expensive or too far to travel. Were we aiming too high? Apparently not, because we managed to create a great day out for everyone in Cheongdo at the Persimmon Wine Tunnel, and the Rail Bike.

Cheongdo, a small town south of Daegu, is mainly known for bull fighting. However, with the pandemic, the public stadium and museum have been closed to the public recently. Less commonly known is that the Cheongdo region is noted for growing persimmons. Persimmons are not a well-known fruit to most Americans, but here in Korea, they are deeply rooted in tradition, culture and mythology. This orange fruit grows on trees from October to December. As well as being eaten fresh, dried and juiced, persimmons are used in candies, desserts, salads, and to make tea and vinegar. Persimmons were traditionally used as a natural dye for clothing and wood. The juice of unripe persimmons dyed fabric a brownish orange and helped ward off insects and prevent mould.

As a group of 10 adults and 13 children, we were excited to check out a unique tourist attraction in the Wine Tunnel. Originally built in 1898, this railway tunnel was used for military transportation but lay empty for decades before being converted for wine fermentation. It is built of red brick with an arched ceiling and keeps a consistently cool temperature all year round. It is this fact and the belief that “ions” from the bricks aid in the fermentation process, that make the tunnel an ideal place for storing the wine. 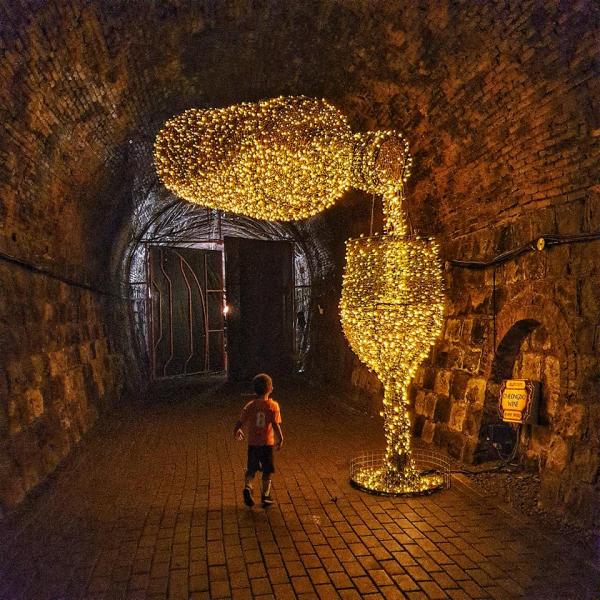 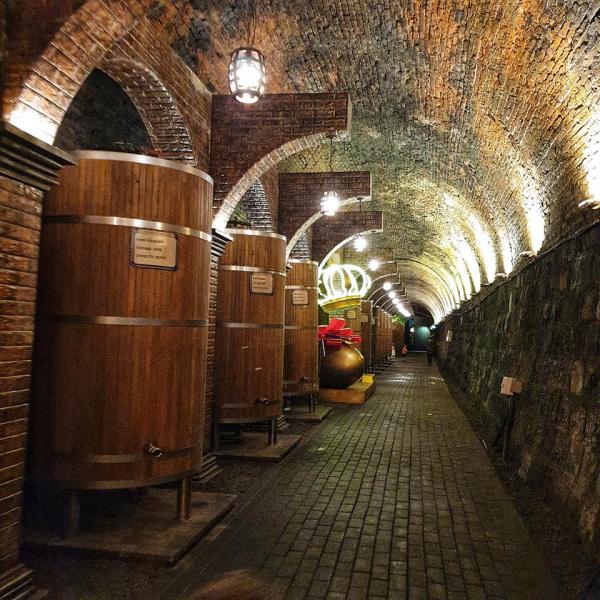 After the recent rain, the tunnel was damp underfoot but still suitable for strollers and was a nice relief from the humidity outside. Inside, there are huge vats containing the fermenting juice and crates of bottled wine of different vintages. The tunnel was also filled with fun photo opportunities. While most of these were wine or dining related, there was also a black light room and the children definitely enjoyed themselves posing with the various props and scenes. The tunnel is free but at the entrance is a shop selling both dry and sweet wines and other persimmon products. Persimmon wine is definitely an acquired taste – even the sweet version is quite bitter. 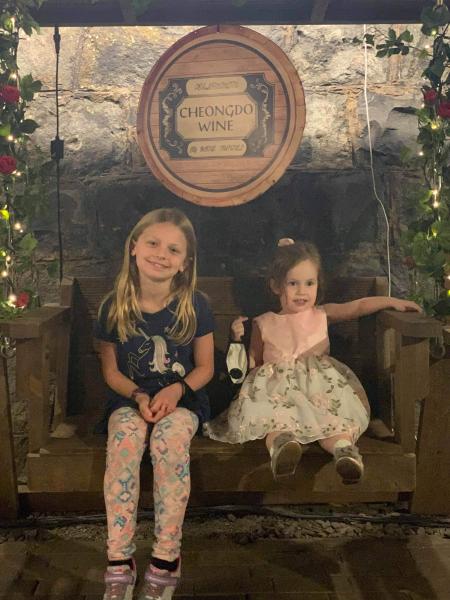 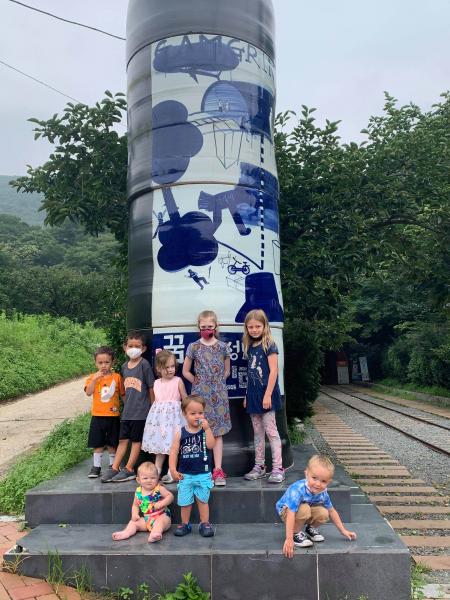 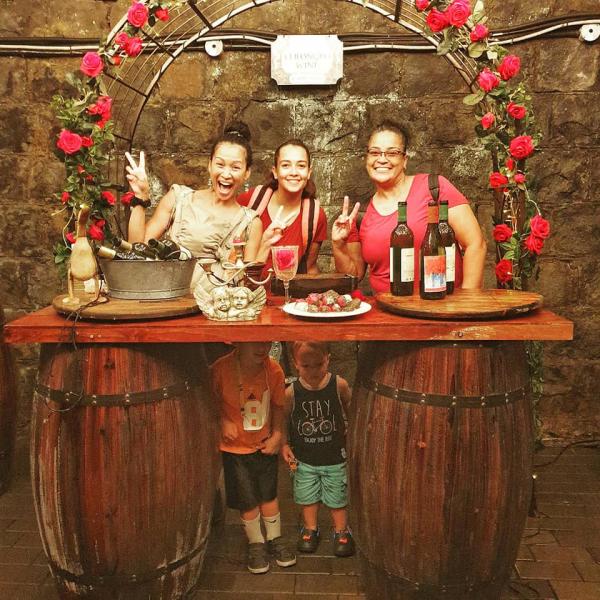 The wine tunnel is located in a small village in the countryside outside of Cheongdo. Parking can be difficult on weekends and during the high season. There are a number of cafes and restaurants in the local vicinity, including a frog themed café. The Wine Tunnel is open daily, all year round. 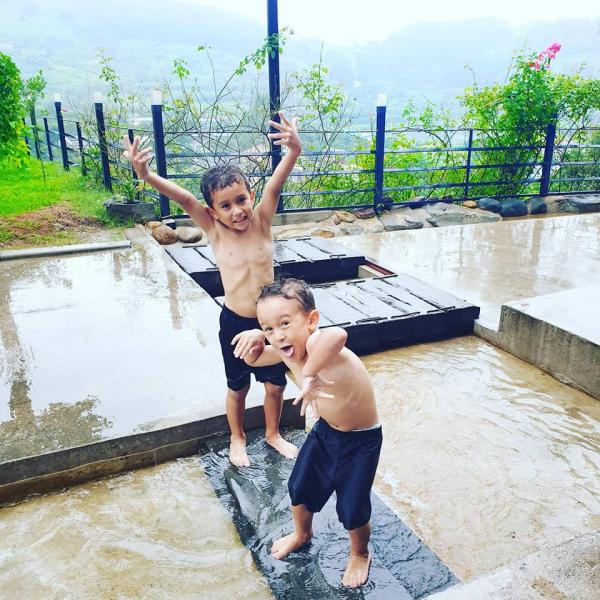 As the rain was holding off despite the clouds, we drove south of the city to the Cheongdo Rail Bike. Nestled in a valley and along the Cheongdocheon stream, the Rail Bike is a 4-person cart that you pedal along a rail track. The children were very excited as we set off but it was hard work for those of us providing the leg power! The bikes are heavy and we were relieved to reach a slight downhill to give ourselves a rest and a chance to enjoy the picturesque countryside. At the end of the track, a turntable sets the bike on its return journey and luckily, a pulley gets the bike up that slope we so freely coasted down on the way out. The trail is 5km in length and takes around 45min. Prepare to feel leg burn the next day! 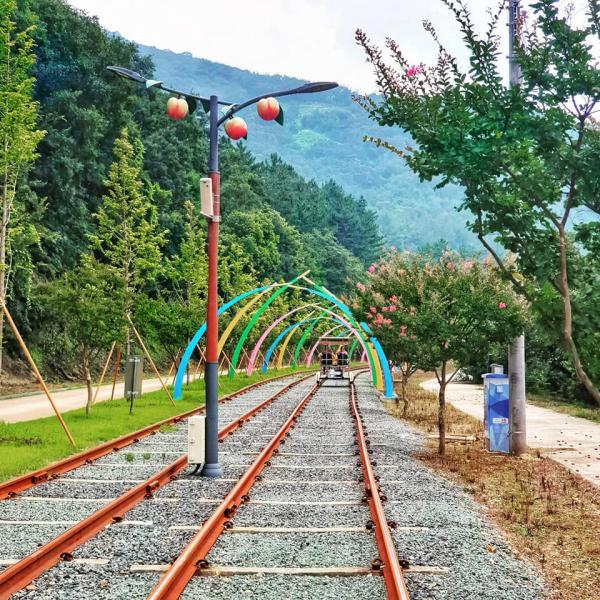 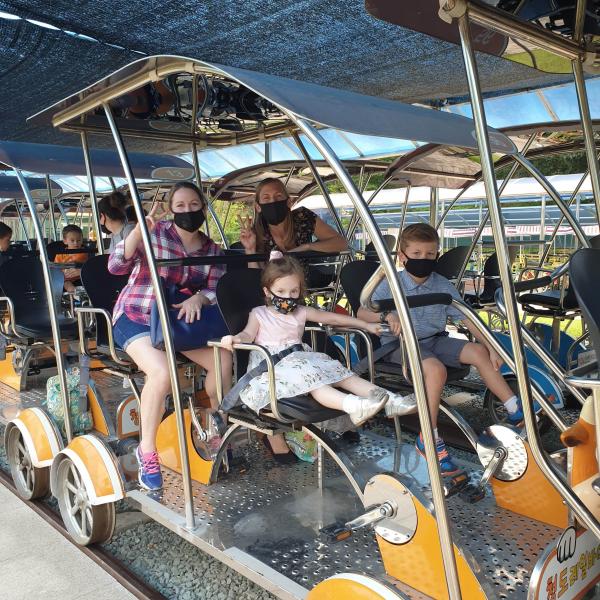 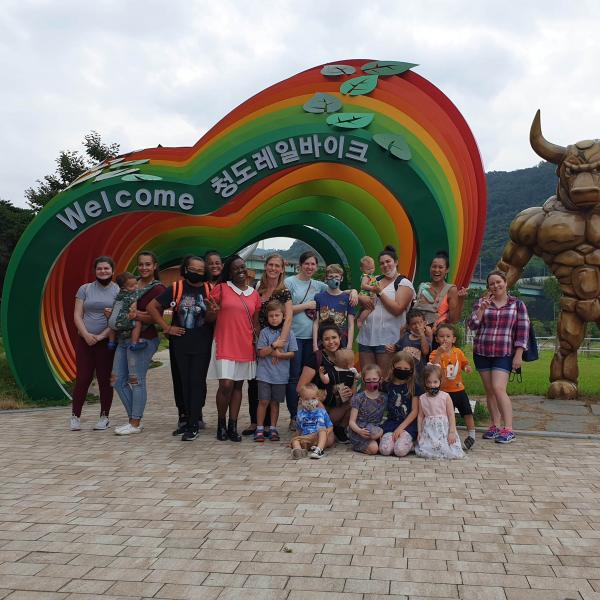 To finish up our day, we ended up at a cute café called Souju. The food was Korean with a couple of Western dishes, and they had a group room available to use. Despite the excellent food and setting, the highlight for the children was the small water stream running through the grounds. By this time, the rain had started up again but they happily spent the rest of the afternoon splashing around in the water.

'Wooden Furniture of the Joseon Dynasty' exhibition at Busan Museum through Sept. 12