When you visit South Korea’s port cities, you’ll find remnants of the Japanese colonial period mostly in the area’s architecture. Cities like Gunsan, Mokpo, Jinhae and major cities such as Seoul, Busan, and Daegu all still hold sections of this history.

Many of these buildings and warehouses with Japanese architectural features stand in disrepair. But there are a few of these which have been converted into museums or been revived as national cultural assets.

Pohang’s Guryongpo Japanese House Street, about a 1.5-hour drive from Daegu, is one of these areas that received some TLC back in 2012. I’d been curious about what the old Japanese houses from the 1900s looked like inside, so I made a visit with my family to the quiet port town. 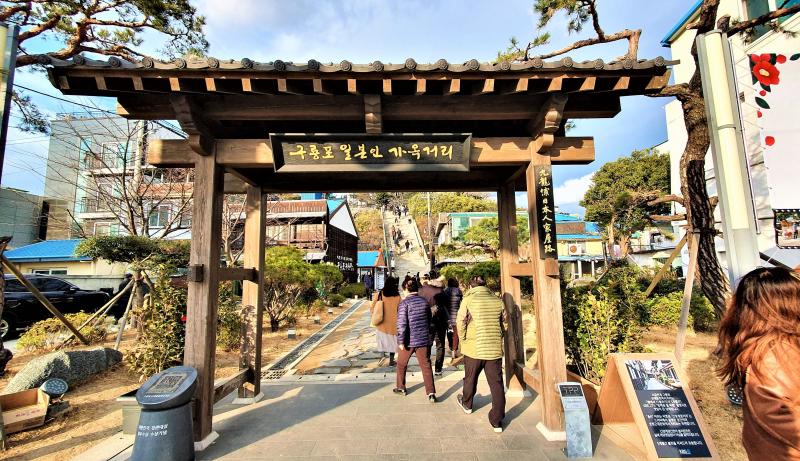 When we arrived, the town gate caught my eye. Beyond the wooden gate, the wooden houses transported us into what felt more like a film set rather than real historical buildings. Just a few steps from the gate, we turned at a big vintage Japanese post box near the staircase that leads to a hill. It is kind of big, so you won’t miss it. There we found an alley with stores offering various street foods like grilled cheese sticks.

A bit further, we came across a humble stationery store selling nostalgic childhood snacks like dalgona candy. I made a quick stop at this store to reminisce about my childhood while I browsed the toys and school items.

Hashimoto’s House
Further down on the path, we found Hashimoto’s House, a large home which is now a museum. The previous owner of the house was Kenichi Hashimoto, a Japanese fisherman who achieved great wealth in the early 1900s. His two-story Japanese-style wooden house was built with imported construction materials from Japan in the 1920s. 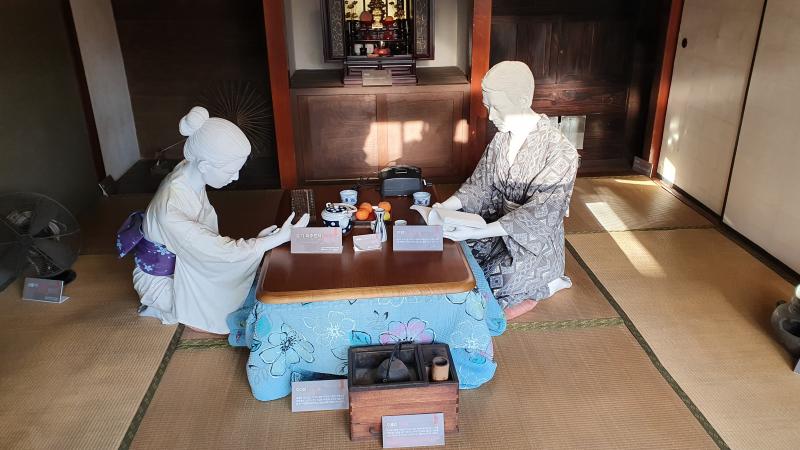 Outside of the house, you can appreciate the charming Japanese-style garden. Take off your shoes before entering the house. Inside you can explore every corner of the well-preserved home featuring old Japanese architecture.

On the second floor, watch the historical footage of villagers returning to Japan. The video includes testimony from members of the Guryongpo Club, a group of Japanese who grew up in the Korean port town. Among some of the contributors is Hashimoto’s youngest daughter, Hisayo, who says she was glad the war was over but was sad she had to leave Korea.

“But when I came back to Japan, I felt lonely.” Hisayo says in the video. “I wanted to stay here because I was born and raised here. I was sad to break up with my friends.”

A walk in the park
After visiting the museum, I headed back toward the staircase and found an old map posted on a bulletin board. This map was created by the former Japanese residents back in the 1930s and showed the position of the neighborhood built along the coast, the appearance of the houses, and even the name of the stores. Around 220 houses were lined up along the 470-meter-long central road near the port. Today, only 28 remain. 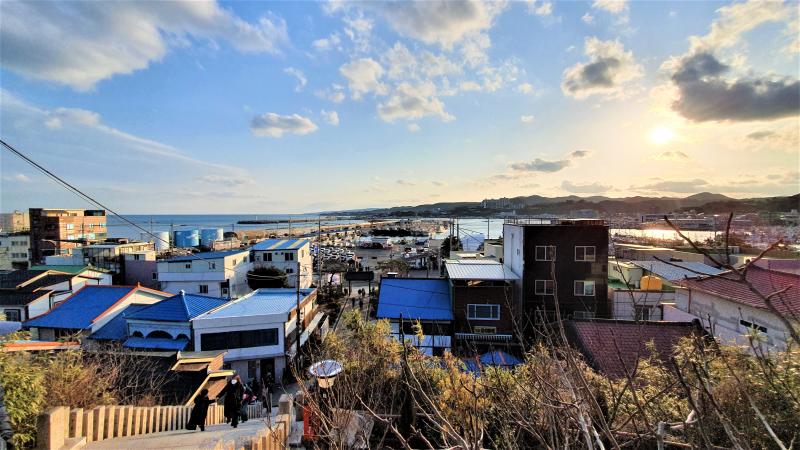 Take the stairs for a view of the neighborhood from above. The sunset here was breathtaking. And don’t forget to snap a photo with the quiet port as the backdrop from the top of the stairs.

Though the village was a bit smaller than I thought it would be, I loved the maze-like old narrow street that is rare in Korea and its exotic atmosphere. If you are looking for a fun family getaway with history and architecture, head to the small port town of Guryongpo.

Take a stroll on the paths through Daewonsa Valley Road