The city of Busan, UN-HABITAT, and U.S. company Oceanix announced that they signed a memorandum of understanding on the construction of a pilot model to promote the world’s first ‘Sustainable Resolution City’ off the waters of Jaeseongdae pier.

‘Sustainable City of Habitat’ is the world’s first project promoted by ‘UN Habitat’, the highest organization in charge of global urban policy, and ‘Oceanix’, a development company in New York.

It is a modern version of Noah’s Ark that not only meets the food demand but also regenerates the coastal ecosystem through the use of bio rock.

According to the 6th report of the Intergovernmental Panel on Climate Change (IPCC), 30% (2.4 billion people) of the world’s population living in coastal areas will be affected by coastal erosion and flooding due to rising sea levels due to climate change.

With the destruction of and infrastructure and millions of climate refugees expected, the city of resolution is being highlighted as an innovative solution to adapt to sea level rise and climate change.

The memorandum of understanding contains the mutual roles in the construction of a pilot model for the city of resolution. 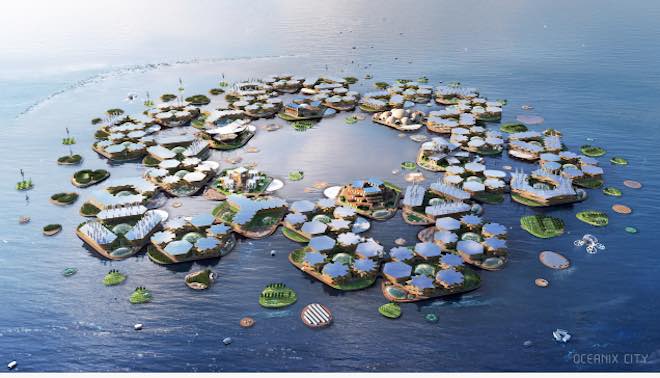 The city of Busan, UN Habitat, and Oceanix each will assume the role of project implementers, such as administrative support for project promotion, support for pilot model projects using their role as an international organization, a feasibility study, location analysis, and project promotion.

This was in response to the UN Habitat’s request for the participation of Busan as a partner city in the construction of a pilot model for Habitat in July.

With the signing of this MOU, Oceanix, the project operator, will conduct a feasibility study, including location analysis and various impact assessments, taking into account the synergy effect of attracting the Busan World Expo 2030 and plan to continue discussions on the construction of a city pilot model.

The habitat is a village envisioned to live a sedentary lifestyle on floating structures that are organically connected and that can be self-sufficient in energy, food, and water while recycling resources so as not to hurt the environment.