For many of the countries that contributed men and material for the UN effort during the Korean War, their numbers were not enough to field independent units. To that end, they were often integrated into larger, American units. For the French, their contributing force of a battalion – named le Batallion de Coree was integrated into the 2nd Infantry Division. Their sacrifices are also memorialized in a monument located 30km north of Osan Air Base, on the border of Suwon and Uiwang.

As with many of the UN memorials, they are in close proximity to the locations where their defining battle was fought. For the French, their trial by combat was near Wonju in January 7-13, 1951. The French put up a formidable defense of the area. Their fighting was also augmented by the fact that the French were also engaged in conflicts in Algeria, and French Indochina (now Vietnam) where many of the battalion had recently been fighting before coming to Korea. 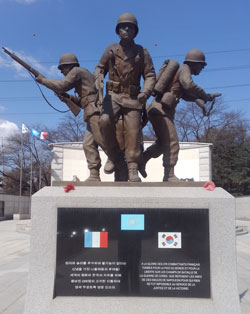 In another fight in the area on Jan. 30, 1951, the French and Americans held off a large Chinese attack. This fight was an example of how superior artillery and air support, combined with good defenses and resupply, allowed the Allies to hold onto positions against an attack by superior numbers. For the French, they also at one point held off the Chinese with a bayonet attack. For these actions, Col. Ralph Montlcar (in was actually Lt. Gen. Raoul Charles Magrin-Venerey, but took a demotion – and changed his name - so that he could command a combat unit) was praised by General Matthew Ridgeway, who in addition to various gifts, recommended the French battalion for the first of their three Presidential Unit Citations.

The monument is relatively simple to find but it can be challenging to find it if one isn’t paying attention. The location is simple: route 1 through northern Suwon. As one comes up a hill that is perpendicular to Expressway 50 (Kyongbu Expressway), the monument will be on the right side of the road. There is some parking there, as it is part of a larger park.

The monument gives a history of the French fighting in Korea on the left side (in French) and the right arm has some of the photos of the battalion de Coree in action. The center panel has the French patch, the 2nd ID patch, and the names of all French combatants who fell during the campaign.

The French continued to fight with the 2nd Division as they moved further north. They also participated in the Battles of the Punchbowl as well as Heartbreak Ridge towards the current DMZ area. But it was near here in Suwon where the French first demonstrated their combat effectiveness.

One might note that the French soldiers are dressed in American equipment, and that is not surprising, being part of a combined US Division. The four soldiers atop a small platform at the front of the memorial look to the four directions of the compass. It is interesting to see the French crest opposite the Indianhead patch on the figures as well as on the memorial wall. The overall memorial is a significant honor to those who fought, and for the 288 who died.