Editor’s Note: Today, we are living in uncertain times, so please plan ahead if, and when, you decide to travel. Follow safety guidelines set by your base and always remember to wear a face mask, practice proper hand-washing and social distancing.

If you’re stationed at Kunsan Air Base, you may have noticed that only 30 minutes from the gate you’ll find interesting buildings that look a little different from those around the peninsula. As Korea has removed signs and buildings from the Japanese colonial rule (1910-1945), Kunsan (or Gunsan, it’s official name) has preserved some of these symbols of the past.

Some of Gunsan’s colonial buildings are now museums or guest houses, which draw in young people who want a closer look at these interesting sites. Gunsan’s renaissance-style city center is great spot for strolling and exploring.

On a late Friday evening, I headed straight to the harbor near my guest house. Some of museums in the area offer free evening admission, so I enjoyed checking out the exhibits and the sights in Jangmi-dong District.

I recommend visiting the Japanese-style store on the 3rd floor of the Modern History Museum. The life and customs of Korean families are highlighted inside. The faded flyers written in Japanese and old Japanese songs brought the replica homes and buildings to life.

Located a couple of doors down from the Modern History Museum, the Modern Architecture Museum (old bank of Joseon) has a display of the commode used by a Japanese great landlord. Ironically, this was the most extravagant and luxurious toilet that I have ever seen and was an eyeopener when compared to the facilities of Korean farmers during the Japanese colonial period.

Behind the old Joseon bank,

there were five or six food trucks offering a wide variety of options - from sweet waffles to steak - catering to the young crowd. I chose Doncrush, a food truck serving up the popular kimbap, or Korean sushi roll. I picked a pork belly kimbap made of lettuce, radish slices, and green onion (4,000 won or $3.35) for my dinner. The outdoor venue was even showing a Korean fi lm on a screen for free. Dinner and a movie!

Signs of Japan’s former rule were also apparent on the water. Floating platforms used as piers to load rice are now lit up with colorful LED lights. With the nice early fall weather and night scene, the stroll was a great way to relax and end the night.

In the 1930s, Gunsan was called “the Japanese city” because more than half of the population was Japanese. The city’s Shinheung-dong neighborhood was where the most affluent Japanese lived. Today, the House of Hirotsu still stands and is the most famous home in the area.

The home is known for the beautiful Japanese-style gardens on its grounds. Hirotsu, a wealthy merchant the home is named after, owned the house and ran the grain shop. This two-story home was constructed in a unique mix of architectural styles from old Japan’s Heian and Shogun eras and has six rooms and a living room.

What’s unique is that the Japanese-style building is equipped with Ondol, a Korean heating system that heats the floor. Despite its designation as a registered cultural asset, there is no English info and its interior is also no longer open to the public. Either way, the gardens, complete with artificial ponds and stone pagodas, are worth a visit.

Nearby is Yeomilang Guest House, a new structure modeled after Japanese 1930s architecture.  The Yeomilang has a garden which is open to the public with free admission and makes for a nice stop for cup of tea in nice surroundings. Check out any of the numerous neighboring teahouses for a cup of Korean tea.

Take a trip down memory lane 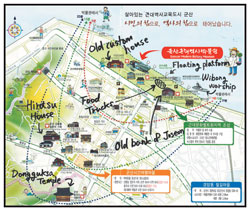 Early the next morning, I headed to the Jinpo Maritime Theme Park, very close to the museums I visited the night before. The only reason I visited the park was to see the retired Wibong warship (LST-676) on display at the park, which is the same model as the landing ship (LST-678) I worked on while I served in the Korean Navy. I still remember when my fellow sailors and I were dispatched to the Wibong for about a week when our ships were at anchor to avoid a typhoon in 2003.

Even though parts of the ship were converted into showrooms, the berthing area, bathrooms and mess decks remained remarkably in their original condition. I wanted to take a short break on a shady deck under the big gun of the warship, just as I did as a sailor, but unfortunately, all the doors to the deck were locked. My trip down memory lane was foiled.

As I walked out of the park, I noticed a greyish rice storage building next to the old railroad tracks. Gunsan, adjacent to the fertile rice fields, which, coincidentally is the only place to see the horizon in Korea, was once the key port for export of the rice to Japan. The open field and storage building near the harbor were always filled with piles of rice sacks during Japan’s occupation. Locals now preserve this area as a symbol of the exploitation of rice.

If you interested in antiques, visit AUCTION 196, a shop located right next to the rice storage building. The antique shop holds an auction every Tuesday and Saturday at 1 p.m. Anyone can attend and buy unique items.

More than 500 Japanese temples were built across the country during Japanese rule, but, surprisingly, only Dongguksa Temple remains in its original condition. When I stepped into the temple, I saw a magnificent main hall with a roof shaped like a helmet of samurai. The temple with its Edo period architecture is only about 100 years old and the layout is fairly simple.

This temple did not have any Dancheong, a traditional Korean pattern used in wooden buildings. The condition of preservation was so good that I felt as if I was visiting a temple in Japan. The contrast between the white walls and black frame along with the surrounding grounds made for an unforgettable sight. You can also take a walk in a bamboo grove behind the temple.

A 10-minute walk from Dongguksa Temple, Jilin-seong restaurant specializes in spicy jajangmyeon and jajang bob. Jajangmyeon (or jjajangmyeon) is a very popular Korean-style Chinese noodle dish topped with a thick black sauce made of boiled beans, diced pork and veggies. And jajang bob is a rice dish that comes with the same black sauce. Girinseoung also serves up a different pepper jajangmyeon, which is the traditional rice with black sauce but with a big, green hot pepper.

When it comes to spicy food, I always think that I can handle it without a problem. Their pepper jajangbob rice (9,000 won), however, was way too spicy! My mouth and lips were on FIRE! The hot pepper flavor was overpowering, and I couldn’t taste anything else. I barely finished my plate of food, and I saw many of visitors unable to finish their spicy noodles or spicy rice dishes. If you think you can handle it, Girinseoung is the place for you!

They don’t accept customers when they run out of ingredients. I was the last customer of the day. So, if you want to try this crazy spicy food, I recommend you get there as early as you can.

At other restaurants in the area and around the peninsula, you will also find a variation of this dish called samsun jajangmyeon. Noodles in black sauce with a lot of seafood and a little bit of pork make up the meal, making it perfect for seafood lovers.

Okay, but is it Gunsan or Kunsan? 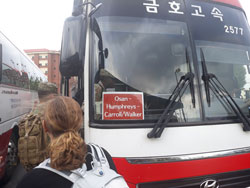 In the past, maps were labeled Gunsan as Kunsan, in the same manner that Busan was marked down as Pusan using the McCune-Reischauer system. Kunsan was changed to Gunsan after the romanization was revised. According to the National Institute of Korean Language, “Gunsan” is a standard notation Korea and all the public offices across the country are following the current romanization. The U.S. military still calls the city outside the gate Kunsan, so it matches up with the its air base’s name.