Gyeongju, located in the southeast of South Korea, is often referred to as the museum without walls. As it has over 2000 years’ worth of history and used to be the capital of the ancient Silla Dynasty.

The Silla country was once the wealthiest region on the South Korean peninsula; with many architectural sites still remaining. Unfortunately after almost 1000 years of ruling, Gyeongju suffered from terrible destruction under multiple invasions.

Now, many of these sites have been excavated and reconstructed as it would have been during the Silla Dynasty, which transformed Gyeongju into a popular tourist destination for Korean and international travelers.

If you are looking for a fun weekend trip away from Seoul; Gyeongju will not disappoint you. Read on to find out the best places to visit in Gyeongju!

The Buddhist temple located in the outskirts of Gyeongju has been part of the UNESCO World Heritage sites Korea since 1995. The temple constructed in 528 is considered a masterpiece of Buddhist art dating back to the Silla Dynasty. Currently the temple is part of the Jogye order – the biggest Buddhist order in Korea.

The temple buildings cover a huge area located in a beautiful mountain park, with many temple halls, pagodas and surrounded by beautiful sceneries continually changing depending on the season.

The Grotto as part of the Bulguksa temple complex is a hermitage located at the top of Tohamsan Mountain.

From Bulguksa temple there is a walking trail, which takes around 1.5 hours, taking you up the mountain to Seokguram Grotto – a round-shaped cave with a unique Bodhisattva statue.

Wolji Pond, previously referred to as Anapji Pond, is a palace complex constructed in 674. The palace, which was blooming during the Silla Dynasty, was used during important national events. Sadly, the ground and palace were neglected after the fall of the dynasty.

During excavations and restorations, archaeologists revealed thousands of relics like jewelry, pottery pieces, bronze figures and roof tiles, which can still be seen at the pond’s exhibition hall and the National Museum of Gyeongju.

The pond is most popular at night as the lights give the tourist site an extra dimension.

This landmark is an ancient astronomical observatory tower and is the oldest surviving observatory in Asia. The tower stands in a vast park, surrounded by flower fields and tombs, where people like to come for a summer stroll and is a popular place for kids to play and fly their kites. 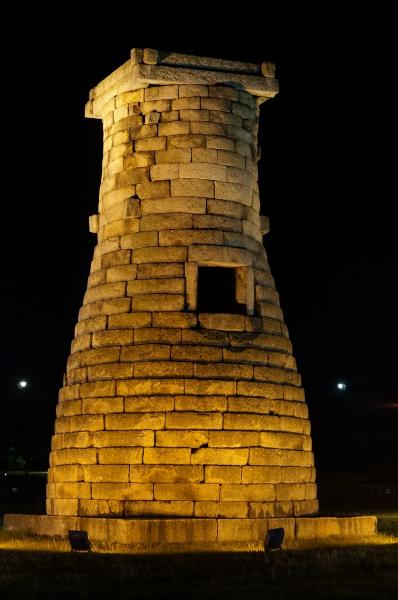 More than 20 mountain shaped large and small tombs can be found in the Tumuli Park, with heights varying between 1 meter and 23 meters. All tombs are those of kings, queens and court officials. Most of the tombs are still unidentified up to today.

Only one tomb was excavated and is now accessible to public. Displaying a stone-pilled wood-lined chamber type, housing a skeleton decorated with valuable jewelry and weapons.

Tips!
Visit Gyeongju during the cherry blossom season; when the whole touristic center transforms into a pink paradise.

Gyeongju has a few quirky museums that are great to visit with kids like the teddy bear museum, the kidult museum and the Gyeongju world car museum.

Gyeongju is famous for its local red bean bread, which can be purchased on each corner of every street.

Hire a bicycle! It is a great way to visit the sites and parks. There are even some biking trails around Bomun lake and Namsan mountain.

- Express bus
Gyeongju is located in the southeast of the Korean Peninsula between Daegu, Busan, Ulsan and Pohang. From each of these cities you can easily take the express bus which will take between 40 minutes to an hour.

The bus from Gosok Bus Terminal Gangnam or Dong Seoul bus terminal runs once an hour and will take around 4,5 hours.

- KTX
The easiest way to get to Gyeongju is by taking the KTX leaving from Seoul Station or Suseo Gangnam Station, running once an hour. Depending on the train this will take 2 – 2,5 hours.

The Gyeongju KTX stations is located 20km from the touristic center, but is easily accessible by bus or taxi.

My Paradise: Spend a Day on Lantau Island, Hong Kong