Here's how to enjoy Seoul on a $10 budget

Traveling overseas may seem expensive, but it's also possible to enjoy a full vacation on a limited budget. Seoul, in particular, is a popular city to visit, thanks to the multitude of free or nearly free attractions, as well as the plethora of good eats and the unique harmony of traditional and modern styles meeting. If you are finding it hard to believe, keep reading to find out how you can enjoy a variety of areas in Seoul for just 10 dollars a person! 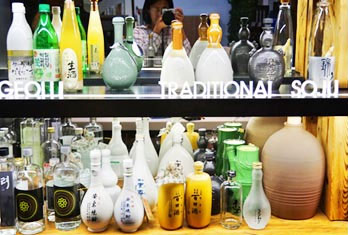 Located between Anguk Station on Seoul Subway Line 3 and Jongno 2-ga is Insa-dong, a cultural space where traditions and modern life blend seamlessly. Stretching out on both sides of the approximately 700 meter main street are shops bursting with crafts, artworks, and souvenirs, interspersed with restaurants and traditional tea shops. The mounted police patrol working in the area always draw attention, and on weekends the street fills with the joyful sound of performances.

It is extremely difficult to resist the temptation of the street foods and brightly colored souvenirs as you walk through Insa-dong. The street food is generally priced around 2,000 to 3,000 won for one item, while fans, bookmarks, pencil cases, and luck pouches are some of the more popular, inexpensive gifts, available for 3,000 won or less.

The Sool Gallery, located in Insa-dong, allows one the chance to see a variety of traditional alcohols from Korea in one location. The gallery was opened by sommeliers of traditional liquors, and introduces traditional alcohols through a new theme every month. The most popular activity of The Sool Gallery is the free tasting event! Visitors wishing to join can send an email to soolgallery@naver.com. The program is offered in Korean, English, Japanese, and Chinese every day (excluding closed days) at 1, 3 & 5 PM.

Another exciting gallery located in Insa-dong is Museum Kimchikan, providing the opportunity to enjoy the UNESCO-recognized gimjang culture and participate in experiences to taste kimchi. The museum was selected in March of 2015 by the American broadcasting network CNN as one of the world's top 11 food museums. The museum includes exhibitions on the history of kimchi and the many types, as well as a space to try kimchi. Audio guides are available for free in English, Japanese, and Chinese to facilitate understanding of the displays.

Samcheong-dong is the neighborhood located northeast of Gyeongbokgung Palace, and has become a representative cultural street of Seoul due to the many cafés, galleries, and unique restaurants. The area is enjoyable regardless of age or gender, with special attractions like the World Jewellery Museum, Owl Art & Craft Museum and more.

Enter any one of the countless cafés lining the street that draw your fancy to take in the ambience of Samcheong-dong over a cup of coffee. We recommend getting a window seat or a table on the terrace to enjoy the active street scene. After leaving the café to wander through the alleys, you may come upon the garden at Jeongdok Library. Many people visit the garden in spring, when the cherry blossoms are in bloom, and in fall, when the trees are bright with color. Another green space located to the north of Samcheongdong-gil is Samcheong Park. The park is a comfortable resting area, with a lush forest and clean valley. The back of the park is part of the old Seoul Fortress Wall; this 8km-long walking trail that circles Seoul offers up view after view of the entire capital.

Within walking distance to Samcheong-dong is Bukchon Hanok Village, a well-established community of traditional houses that are still lived in today. Wandering through the streets and many connecting alleyways, you can find plenty of things to see, from craft workshops and museums of all themes to perfect photo spots. However, the biggest thing to remember when visiting Bukchon is that this is a residential area, so visitors should be respectful of the locals; this means not shouting or running around at night, and picking up after oneself. Let's be sure to keep this cultural attraction open and enjoyable for all!

Seoul Museum of History is a great place to visit for people curious about the transformation of Seoul into a major international city. The capital city for over 600 years since the Joseon Dynasty (1392-1910), Seoul has a long history and the museum has a variety of exhibitions and artifacts showcasing this. Visitors can see the clothing and daily items used by citizens in the past, as well as learn more about the story of Joseon's kings and royal palaces.

The outdoor exhibition is popular for the display of a tram car that ran through the city of Seoul from the 1930's until 1968. The car and statues of people in traditional clothing bring the vibe of the old city to life. The museum has a variety of free resources for international tourists to use. Audio guides are available in Korean, English, Japanese, and Chinese, and guests can also read about the exhibitions through a smart phone application.

Gyeongbokgung Palace, the first royal palace of the Joseon Dynasty, is a symbol of the Joseon era in the heart of the city. When visiting the palace, the attractions you cannot miss are Geunjeongjeon Hall, where the king conducted court affairs; Gyeonghoeru Pavilion, a large open pavilion appearing to float atop a man-made lotus pond; and Hyangwonjeong Pavilion, a small octagonal pavilion hidden deep within the palace.

Located next to Gyeongbokgung Palace is Tongin Market, a traditional market that is popular among tourists. Visitors to the market absolutely must try the dosirak (lunchbox) café! The café is a fun experience where you exchange current money for yeopjeon, brass coins that were used as currency in the past, and use these coins to purchase foods from the vendors for your own personal lunchbox.

The dosirak café is located in the middle of the shops lining the long market alley. For just 5,000 won, you get 10 yeopjeon and a dosirak container to start filling up. Take your time walking through the market and looking at the many food vendors to find things you want to eat. When you find something you'd like to try, buy it with your yeopjeon! If you spend all your coins but see more you still want to eat, you can also purchase it with cash. After completing your lunchbox, return to the dosirak café to eat. The café has chopsticks, spoons, and forks to use, and sells rice and soup to round out your meal.

Olympic Park was created for the use of the 1986 Seoul Asian Games and the 1988 Seoul Olympics. To this day, the park is used as a venue for a multitude of sporting events and concerts. The park is also home to over 200 sculptures from internationally famous artists, and was the site of Mongchontoseong Fortress, a relic from the Baekje Period (18 B.C. – A.D. 660).

When visiting the park, we highly recommend stopping by one of the information centers first to pick up a free map of the park. The map is extremely helpful when choosing which of the park’s many attractions and facilities to visit, as well as finding the best way to get to all of them. There are two information centers, located on opposite ends of the park at Meeting Plaza and Peace Plaza.

Walking through the entire park would take around two or three hours. For a special experience and a more enjoyable way to get around, take advantage of the bicycle rentals available at the park! Visitors can rent bicycles for two, four, and six people. The rental fee varies by bike and day of the week, but weekend and public holiday fees for one hour are as follows: two-person bicycle 8,000 won, three-person bicycle 15,000 won, and six-person bicycle 25,000 won.

Must-see attractions of Olympic Park include Mongchonhaeja Trench, Wild Flower Garden, Rose Garden, and One Tree Hill. Mongchonhaeja Trench features man-made waterfall Mongchon Falls, a musical fountain show and more. Wild Flower Garden is beautiful year-round, filled with wildflowers representative of each season, while Rose Garden blooms from late spring to early fall with a plethora of rose species. One Tree Hill, with its singular tree set amidst a vast green field is quite popular for wedding photos.

Children's Grand Park is a vast, green oasis in the middle of the bustling city. Admission to the park is free and includes a zoo, botanical garden, and all the beautiful scenery you could hope for. The botanical garden has over 290 kinds of greenhouse plants and 70 types of wild flowers. The zoo is home to elephants, tigers, meerkats and dozens of other animals, delighting visitors both young and old. Anistory, an animal show, is a special treat only found at the zoo in Children's Grand Park.

Near the rear gate of the park is a small amusement park offering big fun through roller coasters, a Viking ship ride and other thrilling attractions to less scary rides for even the smallest child. The rides at Children's Grand Park can be enjoyed for a fee, based at 5,000 won for one ride, or 25,000 won for an unlimited ride pass for the whole day.

Soldier's advice: Get off base and explore the culture!