Sometimes I go down to visit my parents who live in Waegwan. On my way to the country village, I agonize about what I'm going to do with my family. Otherwise, I’d sit and watch the grass grow all weekend. After a lot of thought, I decided to bring my parents to Haeinsa Temple in Gayasan National Park in Gyeongsannam-do province. Nothing beats travel while spending time with my family.

The temple was founded during the Northern and Southern States period in 802 by two monks. It is one of Korea's three largest Buddhist constructions and is home to the Tripitaka Koreana, a collection of Buddhist texts carved into 81,350 wooden blocks.

The temple is just a one-hour drive from Camp Carroll, Camp Walker, and Camp Henry. The reason why I chose this place is not only the short travel time but also the outstanding natural beauty of Gayasan Mountain that surrounds the historic temple. Though I stayed only a few hours there, the incredible scenery of the dense forest and the sound of the rushing valley water was breathtaking.

From the parking lot, it will take about a 30-minute walk up to the temple itself. Stop to check out the old stone pagodas which house sari, found amongst the cremated remains of monks, and also Gilsang Tower, a tombstone designated as a national treasure, along the way. Look out for Asiatic Black Bears and wild boar warning signs reminding you that you are in the forest. I loved the smells and fresh air as we made our way up to the temple.

The illjumun (or one-pillar gate), the first gate at the entrance, was the most beautiful gate of the temple that I’ve ever seen before and it guided me to the Bongwhangmun, which is the second gate. Though these were stunning, the beauty of the area was complemented by centuries-old trees lining the path between the two gates.

One of the monuments on this path is a withered tree. This 1,200-year-old tree was planted to celebrate the completion of the temple construction in the Three Kingdoms era. The old tree, which had endured a thousand years, seemed to tell me the temple's long history. The huge tree finally withered and died in 1945 and all that remains is its bottom portion. 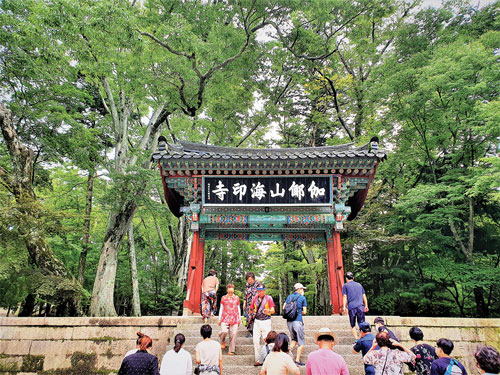 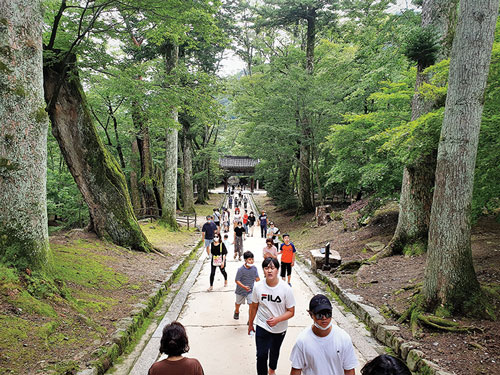 After passing through the Bongwhangmun Gate, we climbed 33 steps and through the Haetalmun, or “gate of enlightenment” or also, “gate leading into complete buddha's land.” Gugwangru Hall sits in the middle of the temple and serves as a resting space for visitors.

The most interesting spot is a Haeindo, a square-shaped stone design mandala. I've seen this kind of maze pattern from the Jikjisa Temple long ago, but Haeinsa's Haeindo was much bigger than Jikjisa Temple's one. It is believed that if you walk while praying along this mandala, your wishes will come true. 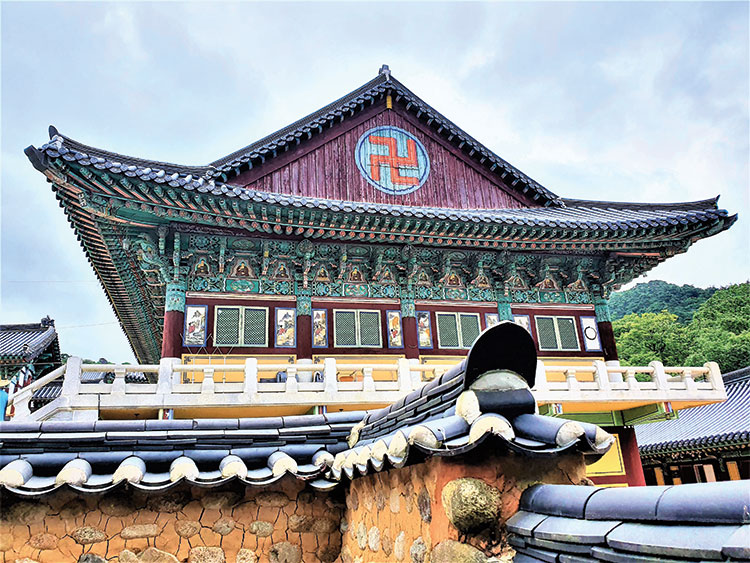 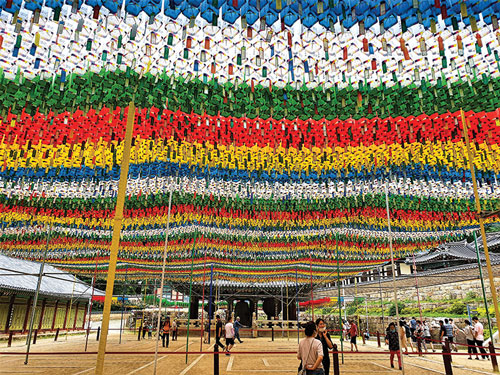 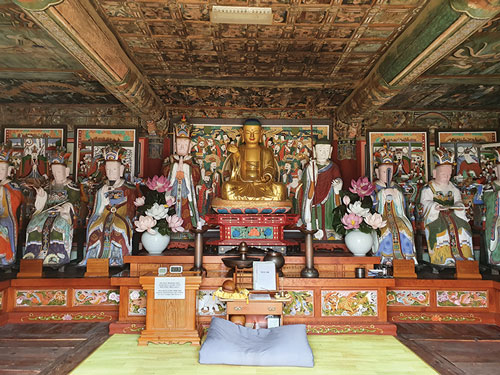 A little bit further, I walked towards the Daejeokgwangjeon Main Hall. This is where the Wooden Seated Vairocana Buddha is enshrines and is the main attraction alongside the Tripitaka Koreana. So, don't miss this seated Buddha before you walk up to the Janggyeongpanjeon!

The Janggyeongpanjeon, is the depository constructed in the 15th century to house the Tripitaka Koreana wooden pieces. Though simple in design, this is, in fact, a UNESCO heritage site.

This wooden structure comprised two buildings called Sudarajeon to the south and Beopbojeon to the north. Both depositories house Tripitaka woodblocks that are designated as a Memory of the World. The secret to what has kept these woodblocks in great condition after over 600 years is the traditional ventilation system—a fact I remember from my school days.

The two buildings facing each other were scientifically designed for air circulation. The lower windows of Sudarajeon were designed three times larger than the upper window, while the opposite side of Beopbojeon Hall is designed in reverse order, allowing the wind from the mountain to blow through the buildings. In addition, the charcoal and salt on the clay floor reduce humidity when it rains by absorbing excess moisture.

The Tripitaka Koreana wooden blocks were created by the Goryeo Dynasty (918-1392), where Buddhism flourished. These are made out of mainly pear and cherry tree wood soaked in sea water for three years, boiled in salt water and dried in the shade for three years to prevent warping. Their production was a national project by the government at the time to not only win the support of Buddhist forces but national uniformity during the crisis of the Mongol invasion. 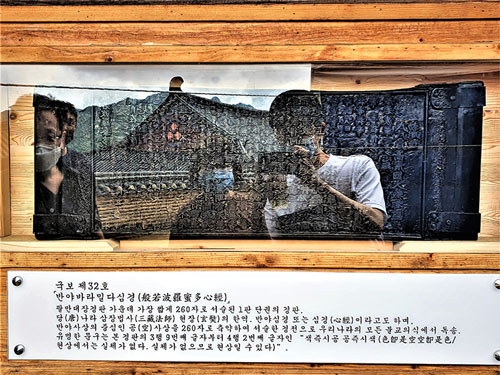 Visitors are not allowed to enter the archive room, but you can see them through small gaps between the bars of the windows from outside. Many of the Tripitaka Koreana wooden blocks were piled up to the sixth floor. Before leaving, we made a quick visit to the souvenir shop and then headed back to the car.

Beyond historically significant spots, the Gayasan National Park area is home to many natural (and national) gifts. Many visit this place for its variety of hiking options that range from easy to difficult. My favorite area is the Hongryudonggyegok Valley with pleasant strolling along a nice path.

Sutra is a traditional teahouse and an ideal spot to enjoy various kinds of traditional Korean tea. The home consists of a couple of rooms and chairs for you to sit and savor a nice cup. There are also some handmade accessories and crafts for sale. I opted for pine needle tea for 7000 won. It wasn’t my favorite, but it was refreshing.

Worried because you’re not familiar with traditional tea? Sutra also has coffee and herb teas. I recommend the yulpitteok, a rice cake made from chestnut and rice. (12000 won for 1 package - 12 pieces) You can enjoy the view of the beautiful garden and mountains around the house. This was a great place for me to wrap up my travel having some moments of relaxation with a cup of traditional tea. 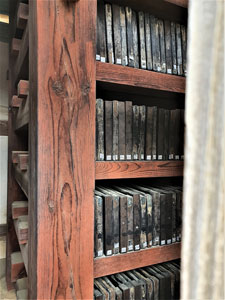 Gugwangru hall that sits in the middle of the temple has a secret place on its first floor. Once the hall was a place for performing Buddhist ceremony, now it serves as a place where you can sip your cups of tea and relax and take a rest in a peaceful, quiet atmosphere. The traditional tea collection including dessert on the menu was impressive. Befitting the concept of a book cafe and gallery, you'll be greeted by thousands of books stacked on wooden shelves. Look outside the cafe through the beautifully designed window, there’s an unparalleled view of the colorful lotus lanterns that cover the Haeindo, a square-shaped stone design Mandala.