When my husband and I decided to take a job opportunity that required us moving from the U.S. to Japan there was never any question that the whole family would be coming along for the adventure. This included our two cats; Snickers, a long-haired 9-year-old with an I-don’t-care attitude, and a spry, blue-eyed 2-year-old American shorthair we named Tashi. 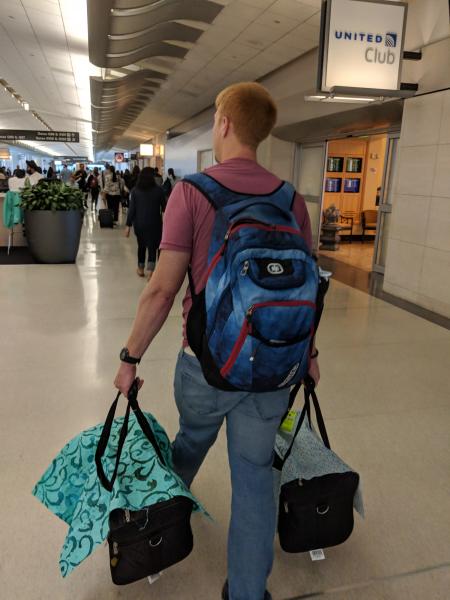 We didn’t know how much international travel Snickers had done, having adopted her when she was seven years old, but what we did know is that she had lived a rough life on the streets of LA. We figured our glamourous but hardened street cat would be alright with some light plane travel. Two years of lots of cuddles and the best organic cat food money could buy had made her soft.

Tashi wasn’t any better. Having found Tashi on the side of the road when he was six weeks old, his only “travel” had been moving down the block into a new apartment. Even then, it took him almost a week to feel at home. To paint a complete picture of just how not ready our cats were for international travel, they also absolutely hated being in their carriers. Any trips to the vet were met with cries as soon as they were wrangled and shoved in. In summary, these were by no means the adventure cats you see on Instagram.

After an insane amount of paperwork, vet visits, a serious dent in our bank account and being asked way too many times if we actually HAD to take them with us, we were as ready as we were ever going to be for our 16 hours of travel. Leading up to this moment, I had lost it multiple times when I stumbled upon articles about pet deaths in cargo. For my own sanity, and for the cat’s comfort, we decided the only option for us was bringing them on as carry-on luggage. Having read every blog post and article I could find on pet travel, I found it surprising how limited the information on international cat travel was. Especially when the American Pet Products Association estimated that 85 million pets took to the skies in 2017. It seems people are doing it, they’re just not writing about it.

We arrived early at the airport because I didn’t need one more thing to stress about. My mind was already a flood of what-ifs: What if they poop mid-flight? What if this is too traumatic for them? What if something is wrong with the paperwork and they get put into quarantine when we land in Japan? What if they somehow manage to escape from their carriers and run loose on the plane?

When we arrived at the San Diego International airport, the cats were all decked out in their carriers, complete with pee-pads and soft fleeces that smelled like home. My wonderful aunt had made little covers out of old, breathable fabric which draped over their carriers hoping it would make them feel a bit safer and shield them from the craziness of the whole experience. In addition, we had tested out a light sedative on them a week prior to flying which seemed to make them sleepy. Considering that’s the default mode for cats I’m not convinced it did much of anything, but we gave it to them anyway hoping it would take the edge off.

As predicted they did their usual on and off meow howls on the way to the airport but seemed to quiet down through check-in and security. This was not another vet visit, the situation just got real, and they knew it. At security we asked for a private screening so that we could hold onto the cats in a closed room while they ran the carriers through the X-ray machines. Not that the cats had any interest in going anywhere, but it felt better than exposing them to the madhouse we all know as airport security. I also had no desire to let my nightmare of chasing two cats through an airport terminal become a reality.

After boarding our first flight from San Francisco and successfully managing to get the carriers under the seats, while also playing Tetris with our foot placement, we finally relaxed a little. Knowing people have cat allergies and trying to be courteous to the stranger in the aisle seat next to us we informed her of the situation. Much to our surprise, she jumped up from her seat, clutching her bag to her chest, and ran to the back of the plane like she was running from a burning building. Apparently, she was absolutely terrified of cats and ended up having to switch seats with someone who was of the more pet-friendly variety.

To our monumental relief, the cats did great on the first leg of the trip. We only heard a meow every now and again and the plane noise did an excellent job of drowning them out. I was told to try and leave them alone as much as possible during the flight to allow them to get settled in their carrier. It was such a challenge to force myself not to check on them every five seconds or to sneak my hand into the carrier to give them some reassuring pats.

We had a short layover which allowed us enough time to get to the right terminal and lock ourselves into a family bathroom to give the kitties a break and see if they wanted any food and water. They ignored both and after they did a bit of ‘exploring’ they got in the same carrier for snuggles and comfort. 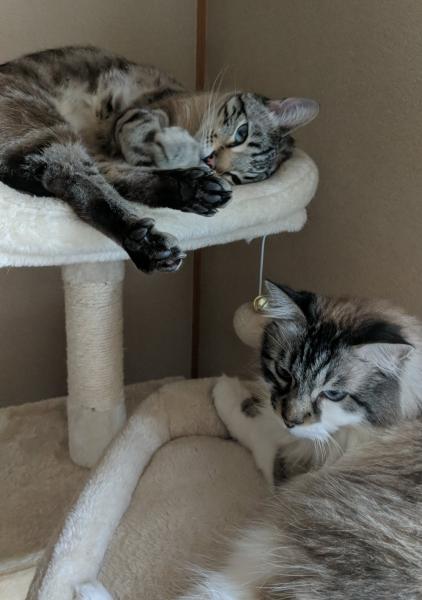 One thing I didn’t realize was how much my shoulders would be on absolute fire carrying two +12lb cats around the airport. Thankfully my husband and I could take turns, but I was already googling massage therapists in Tokyo.

Next up was the part I had been dreading: our 11-hour flight to Tokyo. I was convinced that this was the flight during which one of the cats would take a huge poop, making the plane smell so bad that we would have to make an emergency landing and, in the process, create some sort of international incident. Thankfully this did not happen, and besides us feeling exceptionally cramped because our legroom had turned into Snickers and Tashi’s personal Airbnb space, it went by without incident. By the time we landed in Tokyo, Tashi seemed completely shell-shocked and silent and Snickers was letting out intermittent get-me-out-of-here meows. Thankfully all the paperwork checked out, we got the stamp of approval from animal quarantine, and had a van picking us up to bring us to our hotel.

After almost 16 hours of travel the kitties could finally be released from their carriers. Snickers did her usual scouting out of a new place, going around smelling everything, whereas Tashi ran to the nearest hiding spot and stayed there. Thankfully after about 10-minutes and setting up food, water, and a litter box for them, they were seemingly back to normal.

Now that everything is said and done and the cats are as happy as can be, I can honestly say that the money, paperwork, and stress was all worth it. Moving to a new country is hard enough but having them with us made the hotel room and now our new house feel like home. After all, they’re family.

All domestic airline flights from Busan to Japan suspended