Jungle Dome is a giant hemispherical structure with 7,500 pieces of triangular glass. From the outside, it looks like an egg is cut in half as its length is long and the width is shaped like a short oval.

Reaching as high as 30 meters and stretching across 4,468 square meters, the dome houses escalators, an observatory, valleys, a 10-meter high artificial waterfall, and a skywalk. 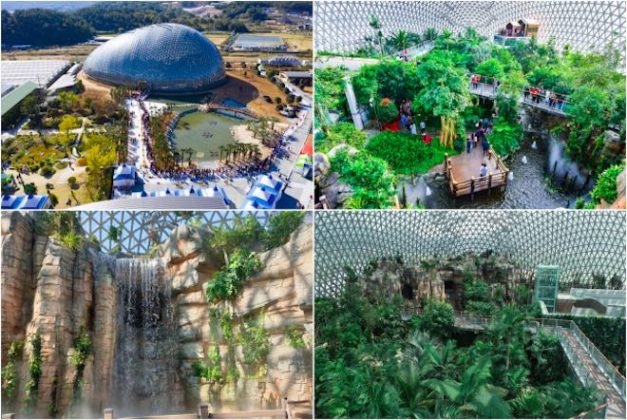 It is a small jungle, with its entrance shaped like a huge tree trunk, a vertical garden decorated with colorful tropical flowers, and the Mowgli doll, the main character of Disney’s classic cartoon, The Jungle Book.

If you walk the skywalk connected to the cave section, you can see the tropical trees that grow more than 20m in front of you. The last section is equipped with a jungle observatory, so you can see the inside of the dome.

As you descend the skywalk, you will be greeted by colorful palm trees, tropical fruit trees, and stone carvings. 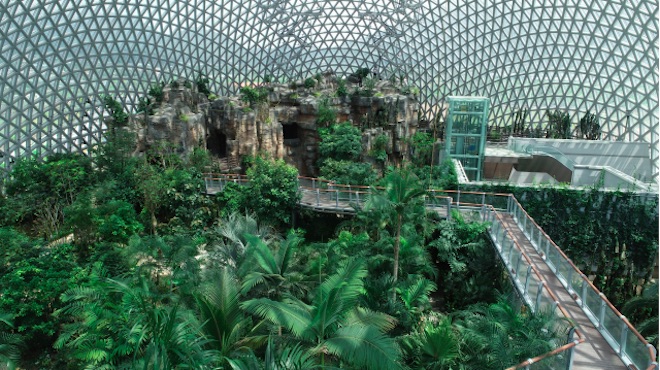 Walking along with the sound of a cool waterfall, you will encounter a 300-year-old Blackboard tree, the representative tree of Jungle Dome that tells the story that wishes come true.

In addition, you can see a bodhi tree called the “Tree of Enlightenment” and a Baobab tree from the novel Little Prince.

The dome previously opened to the public between October 26 and November 3 last year as a preview during the Geoje Flower Festival.

Same-day admission to Presidential Island Jeo-do will be available from Feb. 3