Dokdo is a small island located 87.4 ㎞ southeast of Ulleungdo Island. As farthest island from mainland Korea, Dokdo Island is in the eastern reaches of Korea’s territory. It is composed of two main islets, Dongdo (East Island) and Seodo (West Island) and 30 rocky islets. Though small, Dokdo is one of Korea’s most famous islands. Long-standing disputes with Japan over the island have increased Koreans’ affection for the land to an even higher level. In the past, travel to Dokdo had been forbidden due to political and security reasons and for the preservation of nature. However, it was opened to the public on March 24, 2005. 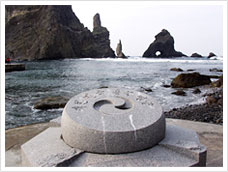 Access to Dokdo can be limited. In the winter time, the operation of passenger ships traveling to the island is suspended. At other times, ship operation or anchoring may be suspended due to unfavorable weather conditions. So, there may only be about 55 days a year when a traveler can step foot on Dokdo. For this reason, there is a saying among Koreans that “access to Dokdo is only granted by heaven and sea.” Currently, there are about 50 or so residents on the island, including guards, supervisors and a couple.

Getting to the Island 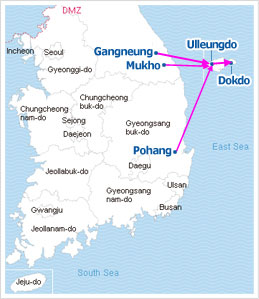 There is no direct ferry from mainland Korea to Dokdo, so tourists must go through Ulleungdo to reach the island. When you book a ship for Ulleungdo, make sure to book a ship for Dokdo. Booking can be made at the passenger ship terminals departing for Ulleungdo from Mukho Port or Gangneung Port in Gangwon-do or at the Pohang Passenger Terminal in Gyeongsangbuk-do.

You can also make a reservation online or by phone, but for online booking, the available seats may be limited. Online ticketing may not be open in certain seasons, so it is more reliable to make a reservation by phone. Reservation services are only available in Korean, so if you need translation assistance, please call the Korea Travel Hotline at +82-2-1330 (Korean, English, Japanese, Chinese) and ask for help.

Reservation and Inquiry
All passenger ships for Dokdo must go through Ulleungdo. Tourists can purchase a ticket for Dokdo at the Mukho Passenger Terminal and Gangneung Passenger Terminal in Gangwon-do or the Pohang Passenger Terminal in Gyeongsangbuk-do. As the passenger ships have a limited capacity, make sure to book a seat in advance if you plan on visiting during the weekends or peak seasons. Because weather conditions can change quickly at sea, it is possible for ships to change their schedule. Therefore, it is recommended to inquire in advance if the ship you booked is schedule to depart on time. From December to February, there are no boats leaving Ulleungdo for Dokdo. The fare may vary by the point of departure and season, so ask when making a reservation.

Tip:
1. Tourists without a declaration of entry are not allowed to disembark at Dokdo. Passenger ship companies will fill out a declaration of entry on behalf of those who made a booking.
2. From December to February, no ships run between Ulleungdo and Dokdo! Also, there may be a limited number of ships leaving from Mukho, Gangneung, and Pohang, so inquiring in advance to make sure your ship departs as scheduled.
3. Remember that you are allowed to stay on Dokdo for just 30 minutes!
4. Ship operation can be changed or canceled due to unforeseen circumstances. Also, even though your ship may have departed from Ulleungdo, it may not be possible for it to be anchored at the dock in Dokdo.
5. There are no restaurants or accommodation facilities in Dokdo, so if you are planning to travel to Dokdo, make sure you get food and accommodations in Ulleungdo.

The Chainsmokers performing in Seoul Sept. 6

Fields of Silver Grass to Visit this Autumn