So, you’ve read about some of the best things to do in South Korea by now, right? Tour the DMZ, go to the Gamcheon Culture Village in Busan, and climb to the top of the Seoul Tower–while those are all great things to experience if you happen to visit South Korea, aren’t you looking for something more…unique? Isn’t that the reason you keep searching “what to do in South Korea” and continue to skip over the first 5 or 6 blog posts about the top things to do? I’d bet that if that statement resonates with you, then Pohang is a place that will set your seoul on fire (see what I did there?)

Pohang doesn’t have boast to have the same great attractions as Busan, Seoul, or Jeju Island do, and why would it? It’s just a small little town on the southeast coast of Korea that’s primarily known for its main seaport, a few temples, and POSCO, one of the world’s largest steel companies. Riveting, right? I think I can speak for all of us when I say that when it comes to exploring new locations: seaports and steel companies aren’t the attractions we set out to witness. It’s for that reason, Pohang might be one of Korea’s best kept secrets. Read on to find out why! 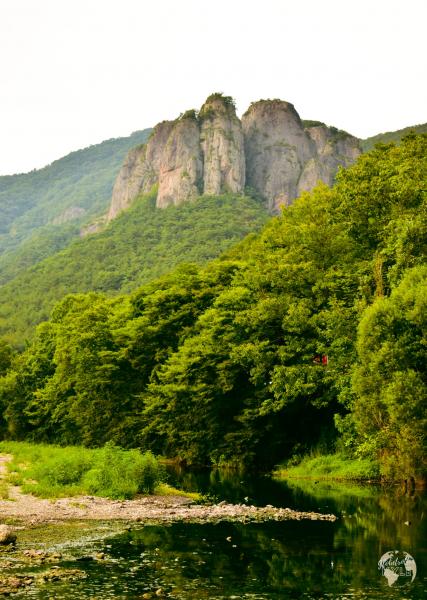 You’ve heard of that cliché statement: it’s not the journey but the destination that counts, right? That’s Pohang. The drive from Osan Air Base feels effortless as you wind 3.5 hours through the Sobaek mountain range before finally punching through the Taebaek mountains and landing in Pohang. For a more memorable trip, do what I did and make the drive around dusk during the monsoon season. You’ll want to pull over at one of Kora’s many truck stops and watch from a distance as Thor throws his massive lightning bolts across the sky as you listen to the faint rumble of thunder a few dozen miles away.

I should note that this was my first overnight trip while stationed in Korea whereas all of my previous adventures had been day trips. I’ll be honest: those trips equated to a lot more driving than I care to admit lol. But being that Pohang was so far away, it only made sense to rent an Air BnB for an entire weekend so I could maximize my exploring time, not my driving time; and that’s exactly what I did. I pulled into Pohang around 9:00pm on a Friday night after a rough week of work and was itching to relax while nursing a cold one. To my surprise, my Air BnB was right on the outskirts of a main street in Pohang. So, after I parked the car, I walked up and down the main street to stretch my legs for a while before grabbing a beer at a restaurant just before it closed at 10:00pm. The plan for the next day? Explore Juwangsan National Park. 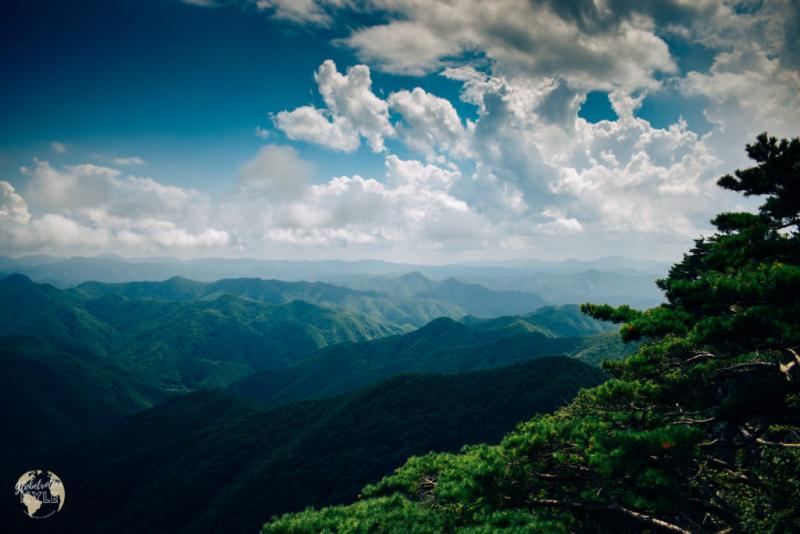 The best drive I’ve made in South Korea (so far at least) is the drive from Pohang to Juwangsan National Park during the summer. My neck was working overtime as I cranked it left and right to take in the unbelievably gorgeous landscapes covered in apple orchards as far as I could see. Not only that, but there were ladies sitting in lawn chairs every other kilometer or so with a basket of fresh apples ready for you to pull over and buy off them.

After about an hour of driving, I reached Juwangsan National Park with no agenda other than to summit a peak and maybe take in a waterfall or two. Little did I know that Juwangsan was going to show me some of the most bizarre landscapes in South Korea! I started at the visitor’s center near Daejeonsa Temple and the Juwangsan Bus Terminal where a lovely park ranger gave me a trail map and some general guidance on which trials would be best for an avid hiker such as myself. With her advice, I set off to summit Gamebong Peak; about 7km (one way) from the trailhead. 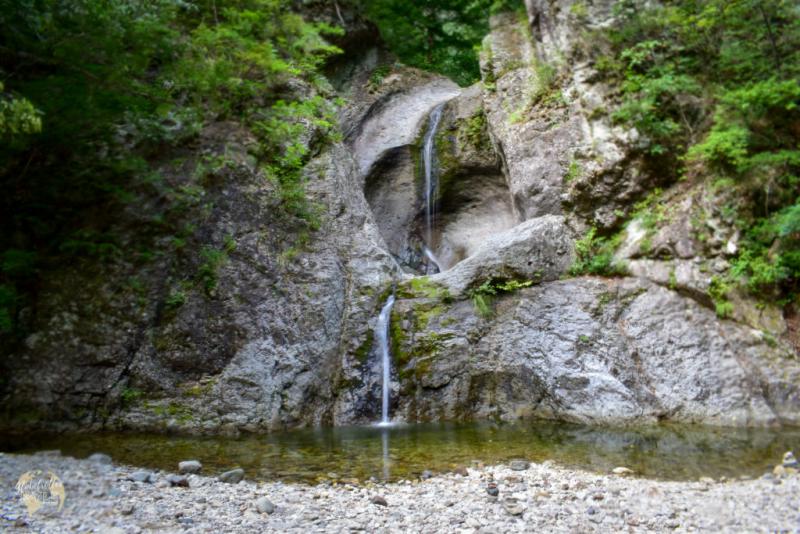 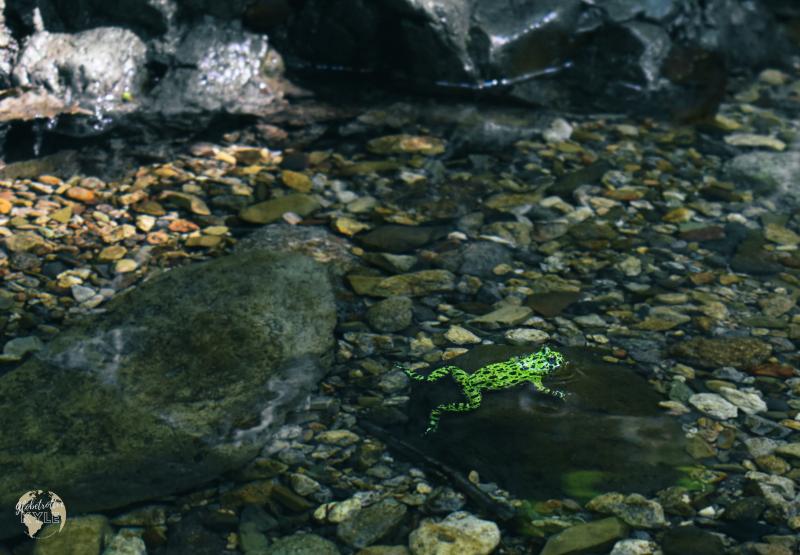 It. was. hot! A word of advice: if you decide to go hiking August, just do yourself a favor and shower before you start your trip because you’re going to get just as wet either way. I was absolutely drenched in sweat by the time I made it to Gamebong Peak! And the worst part was that I was already almost out of water with a lengthy return trip still to come…”great!” I thought as I sucked down the last of my camelback while perched 882m above sea level at Gamebong Peak. Luckily, a nice breeze rolled up through the valley and greeted me as I sat atop the summit and cooled down for a bit before starting the return journey back to the trailhead.

Rather than taking the same route down, I opted to veer off course so that I could see some waterfalls on my way down. This is where the landscape started to really show its true magnificence. Massive canyons towered over me on both sides as I made my way to the Yongchu Pokpo Falls and discovered the iconic “poster child” of Juwangsan National Park. Like I always say: pictures just can’t do this place any justice, so you’ll just have to see it for yourself! 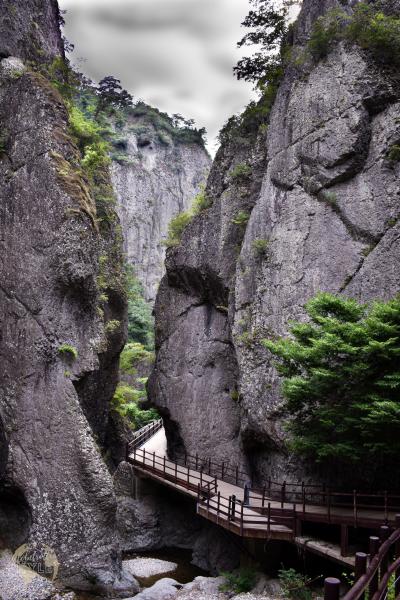 Legs shaky, camelback completely drained, and hunger setting in, I finally reached my car and began making the hour’s drive back to my Air BnB. But remember those ladies selling apples on the side of the road? Of course, I had to pull over and get a massive basket of apples as a snack and some local apple juice to use in my smoothies for the next few weeks!

After a great night’s sleep, my legs didn’t feel like doing anymore hiking so I decided to give them a rest by touring the rest of Pohang by car. I had learned through the all-powerful Google that a unique area called Homigot was located about 30 kilometers from where I was staying so, I loaded up my stuff and made my way to the coast.

Homigot is Korean for “tiger’s tail cape” and it’s a small point of land that stretches into the Sea of Japan on the east side of Pohang. Judging by how it looks on the map, one could easily argue that it’s the eastern most point of South Korea. As I parked the car at the Homigot Sunrise Plaza and began reading the posted signs, I learned that the whole cape is loaded with fun activities to do from art sculptures to museums to beaches. Luckily, I happened to be starting at the Hands of Harmony art sculpture (see below) where I took a good two hours enjoying the art and taking way too many pictures lol. 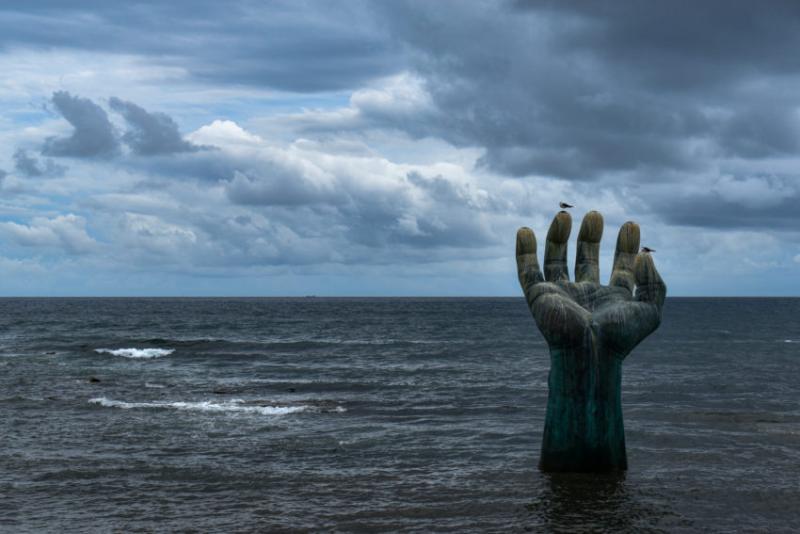 After departing the Sunrise Plaza, I followed the coastal road back towards the mainland but stopped every now and again to take pictures of the remarkable rock sculptures peppering the coast. More and more pictures filled my camera as an impending storm edged closer and closer to my location. Finally, the storm caught up to me, and forced me to duck into a small little coffee shop on stilts overlooking the ocean.

Was I bummed that I couldn’t be out exploring on foot any longer? Sure. Did it feel like (once again) the mighty monsoons were changing my plans? You bet. But was I at all upset that I was sitting in a booth, enjoying a cup of coffee in a seaside café built on stilts as I watched Poseidon wage war against the land with everything he could conjure? No, not at all. In fact, it was quite possibly the best part of the entire journey. You know what they say: if you can’t avoid it, enjoy it! 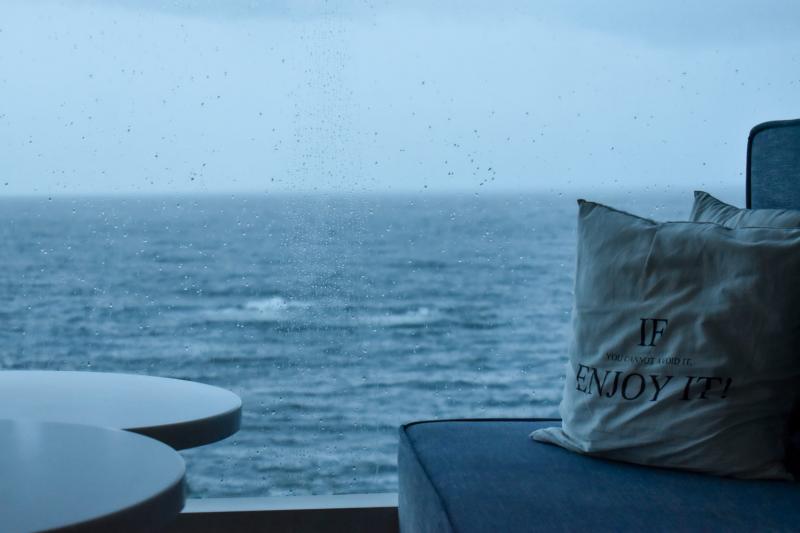 'Hands of Harmony' and more to enjoy in Pohang, South Korea

Reach out to Pohang's 'Hand of Harmony'

‘City of Light and Fire’ to host fest in Pohang

Reach out to Pohang's 'Hand of Harmony'